The Mad Hatter Comes To Gotham 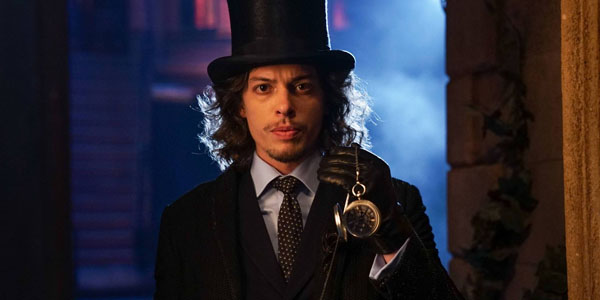 The Hatter adds Madness to season 3 of Gotham on Fox.

Jervis Tetch comes to Gotham to find his sister Alice, and like the comics he has control over anyone he puts his mind to. He starts as a act at Barbara’s club, and starts to tear though Gotham to find his Alice. It turns out that Alice is more Poison Ivy than little lost blonde girl; her kiss drives men mad, and her blood is deadly. Tetch hires Gordon to find Alice, but in the end he almost kills Gordon just for fun. It is clear that this new villain is going to cause a lot of trouble in Gotham this season.

Penguin is also stepping up like it is Earth One, and running for Mayor. Using his new found fame, after the fall of the monsters, he challenged standing Mayor to a new election. To help him he also got Nigma out of jail, and the evil duo is ready to take Gotham by storm.

The double is also more than he seems, after getting a few shots during the morning workout. Bruce is ready to accept him into Wayne Manor, but Alfred is a little weary, with good reason. The double seems to have fighting skills, and some mimic skills. He learns Bruce’s voice and speech pattern, and by the end of the episode has cut his hair to get closer to Selina.

Three episodes into the season and it has been most entertaining to watch the development of Gordon. When the show started he was too stiff, and it was clearly the writing not the actor, but now he is starting to show signs of not only the Gordon we know, but Bullock and Batman. I can’t help but wonder what he will turn into by the end of the show.