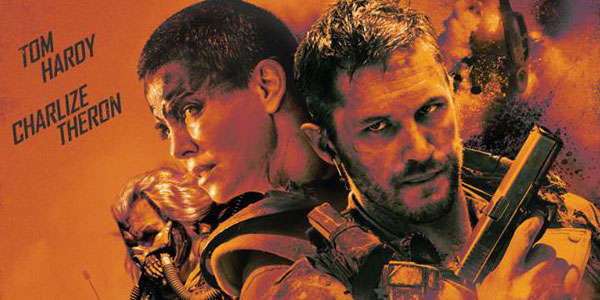 Did you hope MAD MAX: FURY ROAD would be good?  Well, it isn’t good.  It’s GREAT.

I had high hopes for MAD MAX: FURY ROAD, a movie which promised not only the return of Max Rockatansky, but also creator George Miller, who directed all three previous Mad Max movies.  My expectations increased after the first trailer hit, hinting at a kinetic energy that transcended even the
full-throttle momentum of The Road Warrior.  So call me an easy mark if you want, but by the time Fury Road started running last night, I was ON. BOARD.

When I say “started running,” I mean it literally, as this movie is brimming with energy, not only in the precision and audacity of Miller’s camera work, but ingrained into the very fabric of the film.  As you may have heard– which I can now enthusiastically confirm– Fury Road is, in essence, one giant action scene, an extended chase sequence which keeps the story and its various characters in a constant state of forward momentum.  I mean this as an absolute compliment– the presence of near-constant action beats, colossal levels of carnage, explosions and mass mayhem could, in less skilled hands, easily become a droning bore, dulling the audience’s senses and strong-arming us into a disconnect with what is taking place on screen. But Miller avoids this potentially lethal pitfall, by not simply upping the ante, but tying the crests and falls of the action closely to the characters themselves, establishing stakes and creating moments of true fear and anger, as well as elation and investment, all while Max, Furiosa (an incredible Charlize Theron) and their team rocket forward on an insanely cool looking War Rig.

The energy and visuals alone would be enough to make Fury Road well worth a watch.  But there’s even more to this movie than the astonishing set pieces, the fantastic sense of scope, and the confident direction of a true master of action filmmaking.  The cool thematic stuff beneath the surface of this movie, most notably the feminist undertones, are what makes Fury Road a modern classic, with a sense of social relevance every bit as aggressive as its action beats.  You might have heard your local Men’s Rights Advocate whining that Max isn’t really the protagonist of Fury Road, and this is essentially true– that honor goes to  Furiosa.  It’s her journey we’re following, as she defects from the vile Immortan Joe, attempting to free his “wives” (translation: sex slaves) and spirit them to safety.  Max is certainly a part of this mission– reluctantly at first– and he is brought to life perfectly by Tom Hardy… but his role is that of an ally, doing his part to help Furiosa’s cause.

It’s a perfect setup, actually.  In terms of the story. while I was fairly confident Max wasn’t going to die in this movie, everyone else is absolutely fair game, heightening the considerable tension of the visceral clashes between Furiosa’s Rig and Joe’s army of War Boys and their vehicular death machines.  It also maintains the refreshingly practical feminist through-line as the story of a woman saving other women, and Max never co-opts the objective by assuming the “hero” role, nor does he desire to.  Hardy and Theron are great together, recognizing something similar in one another that transcends even their mutual desire for redemption.

While they get slightly less screen time, the wives each get some time to establish themselves as unique characters, as opposed to just being defined as victims.  Each of these women reacts to the madness in which they find themselves in a different way, but each is believable… and they lead each character to their own unique ending within the story.

On the opposing side of this high speed confrontation is Immortan Joe and his legion.  The warlord’s authority in established early on– he controls the water in a fortified citadel, enjoying breast milk and other what-passes-for-luxuries of the post apocalyptic world, while withholding basics like water from the subjected masses beholden to him.  The returning Hugh Keays-Byrne (who played Toecutter in the original movie) brings a diseased menace to Joe, a vile and cruel beast of a man hidden beneath an awesome looking respirator mask and body armor molded to look like a muscle-bound, idealized masculine body.  This is one of a number of gleeful digs at patriarchal masculinity peppered throughout the movie (another being a character who is, literally, a manbaby), and it’s all rooted within the story.  When Joe first discovers his wives are gone, one of them tagged a wall with the question “Who ruined the world?”  The obvious answer being, men like Joe.  Joe and his cronies all spring from this mix of social satire and genuine menace, which felt completely on point, yet made them an effective threat to our heroes.

Even more interesting were Joe’s foot soldiers, the War Boys.  These shirtless, pale skinned zealots compose the bulk of Joe’s army, and essentially act as suicide bombers.  We’re introduced to their extreme ideology mostly through Nicholas Hoult’s Nux, one War Boy whose arc I will not spoil in this review, but what makes these guys interesting are small details which suggest they, unlike Joe and his fellow warlords, may not be entirely willing participants in the atrocities they commit.

To say there’s a lot going on in FURY ROAD is kind of an understatement.  Yes, the action is next-level incredible, thanks in a large part to Miller’s lean toward practical effects whenever possible.  And yes, there’s some very cool social politics at play in the movie’s larger themes.  But the true miracle of this movie is that it all comes together into one, cohesive whole, telling a simple yet sprawling story as effectively as any of the all-time action classics.  Most movies this jam packed with set pieces, character arcs, elaborate production design, larger themes, and constant explosions would tend to leave the audience exhausted.  FURY ROAD left us excited.

Because FURY ROAD is fucking awesome.