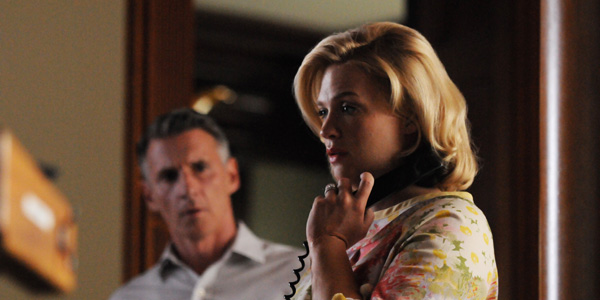 After last week’s nigh-flawless double premiere, I had my doubts that this week’s episode of Mad Men would be able to match up. It didn’t, but average by this show’s standards is still pretty fantastic, so who am I to complain?

There were a couple of firsts in Tea Leaves. Jon Hamm took to the director’s chair and did an overall excellent job with the episode. I loved the clock ticking loudly in the bathroom as Betty listened to her diagnosis over the phone; it added suspense to the scene and offered a rich thematic element (was that her life ticking away?). Speaking of Betty, she’s obviously put on a few pounds since we last saw her. She gets a little bit of a scare when she visits the doctor for some diet pills but leaves with news that she might thyroid cancer. Overall, she seems to have mellowed out quite a bit and settled into her role as the housewife of an extremely wealthy politician (whose mother is a royal pain), though it’s clear that she hasn’t gotten Don out of her head yet. Betty’s plot isn’t the most exciting aspect of the new season right now, but I have faith that her story will grow beyond simply a discontented wife eating a lot of ice cream and getting fat.

Things are significantly more exciting in New York City. An increasingly precocious Pete has managed to sign Mohawk Airlines back with the agency much to the approval (and chagrin) of Roger. The dispute between the two is really coming to a head and consistently offers some of the most entertaining scenes of the show. Roger wants a new dedicated copywriter for Mohawk’s account and Peggy is put in charge of hiring the new talent. Enter Michael Ginsberg, a creatively gifted but socially awkward young Jewish man. He’s obviously dysfunctional enough to fit right in with the employees at SCDP, and the dynamic between him and Peggy that’s already been established will no doubt be exciting to watch.

Arguably the most important theme of this episode, which seems like it will continue to drive through the rest of this season, was the widening generation gap and its effect on the aging Don and Roger. Don and Harry’s quest for the Rolling Stones was revealing of both Harry’s unhappiness with his current married life and Don’s continuing complacence with getting older; for instance, when he was with his bohemian girlfriend in the first season he wouldn’t have thought twice about smoking weed. His conversation with the young groupie was a great scene that delved even deeper into Don’s changing personality. Regrettably, Lane didn’t get much screen-time in Tea Leaves, and neither did the promising plotline introduced last episode concerning the African American job applicants.

At the end of the episode, Roger asks Don, “When is everything gonna get back to normal?”  Here’s hoping that it never does; that would make for one boring TV show.