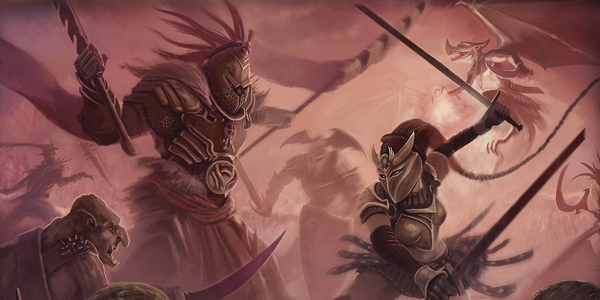 Designer Vlaada Chvátil and publisher NECA/WizKids Games deliver The Lost Legion, an amazing expansion to the acclaimed Mage Knight Board Game.  This supplemental piece adds a great deal of variety to an already extensive rule set while avoiding the pitfalls that some game expansions stumble into. 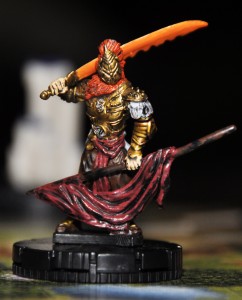 In case you’re unfamiliar with the base set of Mage Knight, it is a brilliantly thought-out and perfectly executed bit of gaming that incorporates elements of role-playing, deck-building, open exploration, and dungeon crawling.  The action unfolds on a series of cog-shaped tiles, each filled with locations to investigate and rampaging monsters to battle, which you build into the game world as you play.  These are traversed by the set’s pre-painted miniatures representing the Mage Knight characters, dozens of location-specific cardboard tokens, and even city figurines with Clix bases.  A fair warning though – while Mage Knight is an absolute blast, game sessions can be rather long and there is a huge learning curve to overcome. While the rule books are very well-written and informative, there is a lot to get through.  The complexity and depth of the game, coupled with a very math-heavy approach to combat, may turn off some casual gamers.  Those who dedicate some time and a lot of reading, however, will be rewarded with an incredible board game experience which can be enjoyed solo (and is surprisingly great solo by the way) or with three other players – you may have up to five players competing while using the Lost Legion set.

This expansion doesn’t introduce a wealth of new rules or slow things down with newly introduced mechanics, instead building naturally off the game’s existing strengths and perfecting them.  The designer himself has remarked that he feels the Lost Legion set completes Mage Knight.  So what does the set add?  For starters, you get an additional hero, Wolfhawk – a duel-sword wielding female warrior complete with a great new figure and her own deck of “deed” cards.  All actions in the game, including movement and attacks, are still controlled solely through your deck of cards, which are discarded when used and recycled again during the next round, along with any new cards you had obtained in the prior round.  Since a new character is available, players can now play any of the existing competitive gameplay scenarios with five people instead of four.  Similarly, cooperative scenarios can now be played with four heroes as opposed to three.  This is because, in a co-op campaign, one hero’s “deed” deck is normally used to control a dummy player who functions as a clock of sorts – this ensures that the game’s day and night phases continue progressing as normal.

The mechanic works well enough, but the inclusion of this dummy player wasn’t exactly exciting; just an added step in the turn progression.  The expansion changes this by adding General Volkare, a hulking new figure standing atop a Clix base that players can easily use to dial in his level.  In the two new cooperative scenarios, the dummy cards are used instead to control Volkare, who poses a huge threat to other players as he travels the board with an immense army in tow.  In the first of these scenarios, “Volkare’s Return,” he starts near the players’ starting position and will wander the board in an unpredictable fashion until city is discovered.  At that point Volkare will head directly for it, attacking everyone in his way, attempting to overthrow the city before the Mage Knights are able to capture it.  A second scenario entitled “Volkare’s Quest” directs players to set up all the navigable tiles in a specific arrangement with General Volkare starting on the opposite side.  Across three in-game day & night rounds, Volkare will slowly march towards the portal from which you arrived.  Players must spend much of this gametype avoiding the general and focusing on amassing useful spells and artifacts, recruiting units, and obtaining powerful action cards.  Before he reaches the portal, Volkare must be defeated, but his army is so massive that it will likely take the combined effort of all heroes to chip away at it.  It’s a really intense experience and has an epic quality that is difficult to capture in a fantasy board game. 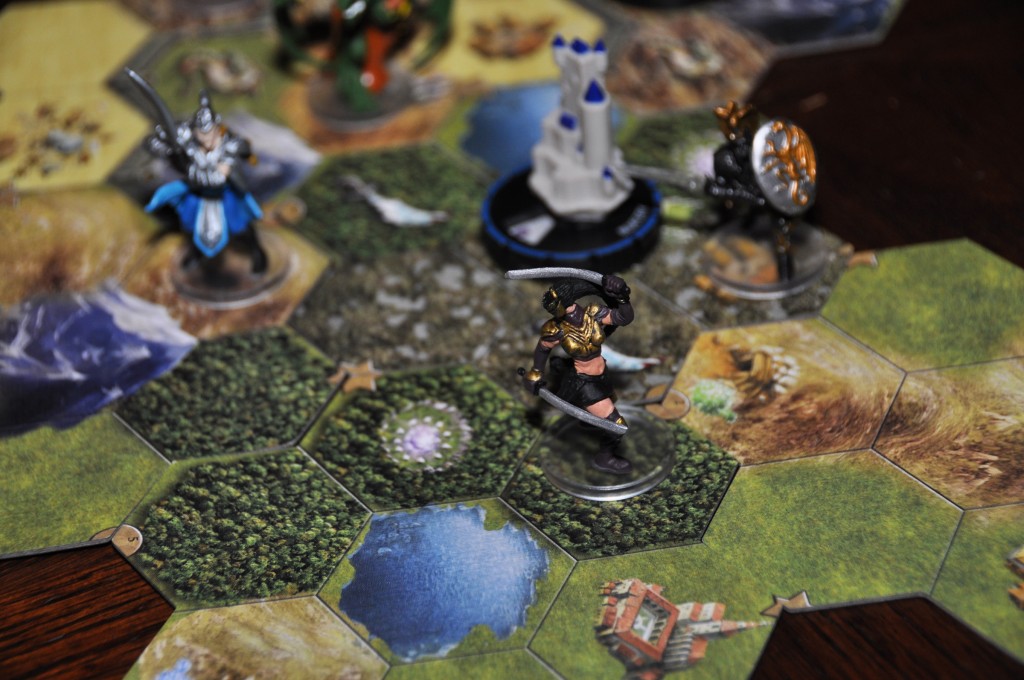 On top of the new characters and cool new ways to play the game cooperatively (you can also add a character to any of the competitive scenarios outlined in the rules of the base game), there are a ton of new monsters to battle.  The Lost Legion box is loaded with new tokens that add lots of variety to the enemy encounters, whether they are found in keeps, dungeons, labyrinths, mage towers, or anywhere else.  When combined with the monster tokens from the original game, it makes these encounters far more unpredictable — many new enemies are even loaded with new offensive and defensive abilities.  For example, some enemies (like Hydras) have the means to attack you several times at once and each attack must be blocked separately.  Some foes will be able to raise a greater defense if their attacks went unblocked or attack you in such a way that you cannot assign damage to the units in your command.  Keeping with the the thematic rules that govern much of the game, the new Catapult enemies are listed as “cumbersome” meaning that you may spend movement points to avoid their attack instead of blocking.  The game isn’t necessarily more difficult with the expansion added, but additional planning and strategy may be needed to walk away from a battle without taking several wounds (represented by “wound” cards that clog up your hand as they have no playable use and cannot be discarded normally.

Finally, you gets some other goodies in the box that will please owners of the base set, particularly early adopters with the first edition.  A few of the first edition cards featured language that was too ambiguous and was changed in later editions.  Those revised versions are included here as an easy way to get them to fans.  Aside from that, some of the character-specific deed cards have been tweaked and balanced, receiving new artwork and updated text that makes it fit into the game a bit more efficiently.  As all the cards have a tiny number in the corner, it’s very easy to determine which ones you need to swap out.  Some addition mana tokens were thrown in for good measure as well, but more importantly, all the heroes  received an additional skill to be used specifically in co-op scenarios.  Remember how you had to remove your “interactive” skills in cooperative games, leaving you with one fewer upgrade?  Well, now each Mage Knight character has access to a co-op skill that can be used by that player with a secondary ability that becomes available to everyone else.  Rounding the set out are a stack of new location tiles that feature some new explorable areas like mazes (which offer some rather unique combat/reward opportunities), and refugee camps.  These camps allow players to recruit units (for an increased “influence” fee) that were previously only available from a number of fortified locations. 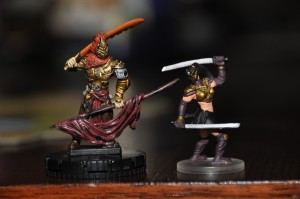 If you’re a fan of the Mage Knight Board Game, purchasing the Lost Legion expansion is a no-brainer — it takes an already outstanding game and manages to make it even better.  If you haven’t yet given Mage Knight a shot but are into fantasy, adventure, or dungeon crawler titles, now’s your chance to grab the whole shebang.  The expansion is good enough that I’d strongly recommend picking both boxes up from the get-go.  Much like the base set, the miniatures are pre-painted (a rarity with these type of games) and are quality, sturdy pieces – as you’d expect from NECA.  With this piece being executed so well, I’m definitely looking forward to seeing what else the designer may have in store for this title in the future.