Mama Is A Great Character Study In An OK Movie 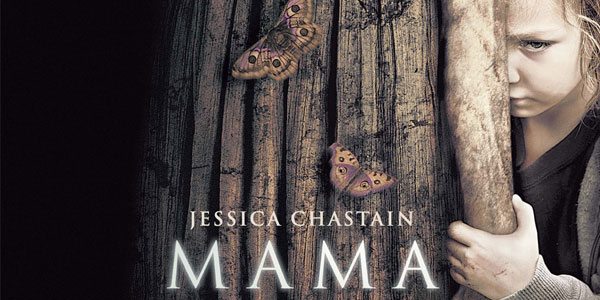 There’s some intriguing ideas behind Mama, with a look at both the light and dark sides of maternal love.  But the interesting ideas and wonderful performances unfortunately get stuck in a rote ghost movie.

Mama has a lot going for it, and it doesn’t waste much of that– produced by Guillermo del Toro and starring Jessica Chastain (who killed in Zero Dark Thirty) and Nikolaj Coster-Waldau (the Kingslayer!), I figured there would be a pedigree of quality on the screen.  And there is– this is a movie filled with some big ideas, imaginative and creepy visuals and some truly standout lead performances.

Love is an intriguing thing– we all consider love something pure and good, but it can also lead to obsession, fixation and violence.  Mama examines both sides of love, specifically motherly love, as the opposing character arcs of the two surrogate mothers (Chastain’s Annabel and the ghostly Mama) unfold.  Mama, of course, represents the obsessed, possessive love, becoming jealous and vengeful that feral children Victoria and Lilly– who had been abandoned to live on their own deep in the woods for five years– have been adopted by their uncle Lucas (Coster-Waldau) and Annie.  But it’s Annie’s character arc I found most interesting, as the punk rocker is uncomfortable about even the notion of having kids, let alone two particularly damaged ones.  I absolutely identified with Annie’s perspective at the start of the movie, and Chastain is so good that her evolution from wanting nothing to do with the girls, to feeling burdened by them as an obligation, to genuinely loving and trying to protect them, was organic and believable.

Maybe it’s just that her short black hair and ripped band t-shirts play to my personal punk rock sensibilities, but I felt Chastain was amazing here.  Coster-Waldau was also great as her boyfriend Lucas, a remarkably decent guy whose own five-year obsession with finding his nieces has left the couple broke.  I’m glad little details like that were included, since otherwise Luke might come across as too squeaky clean, too perfect, but Coster-Waldau brings just the right amount of fringe around the edges to make Luke a very realistic, genuinely good guy.

As good as the adoptive parents were, I found the kids to be even better.  Victoria and Lilly were amazingly realized, barely able to communicate when they are first discovered.  The feral children move like animals, and it’s surprisingly convincing, but what’s even better is each girl evolves into her own unique character.  These two are not carbon copies of each other, as Victoria begins to embrace her new life progressively, accepting of her new home (although still haunted).  Lilly, meanwhile, is much less comfortable indoors, remaining more animalistic and vulnerable.  Both girls are a wonder to watch, and the sequences of them acclimating to our world with the help of Annie and Luke are among the best parts of the movie– so good, I kept asking myself if the ghost story angle was really necessary to keep this compelling.

I still don’t have an answer, because the ghost stuff is where the movie gets very conflicted.  I loved Mama representing a dark side of love, and her backstory is well-presented, in a series of very stylized black and white, newsreel style scenes.  There are ghostly moments early in the film which feel wonderfully iconic– in one such scene, Lilly, framed by a doorway, plays tug of war with someone off screen (presumably Victoria), but her sister then walks up the stairs nearby, proving Mama is Lilly playmate.  The design work was equally good, as Mama is a rather disturbing looking creation, but one whose scary design makes contextual sense– there are reasons for Mama’s twisted, crooked frame, her gasping, gurgling moans and, of course, her obsession with the girls.

Having those reasons ground the character design of the creature was excellent… I just wish the ghost story itself could have been as original as everything else in the movie.  After a great first half with plenty of atmospheric, ghostly chills and the excellent arc of Annie acclimating the girls, Mama basically falls apart, relying on trope after trope of the classic ghost story to hobble its way to an ending.  We’ve seen this situation so many times– characters scramble to discover a deep-buried secret, while they try to set things right and satiate the angry ghost.  There’s nothing particularly interesting about the last act of Mama, and I felt it didn’t even measure up to other recent ghost stories like The Orphanage or The Woman in Black.

As the movie approaches its finale, the steps involved are so cliche that even a surprisingly non-cookie cutter ending couldn’t hold a candle to the excellent first half.  This, combined with some spotty CGI work that occasionally invalidated the wonderful character effects, made it hard to stay focused on the film from start to finish.

Despite these structural and plot-based drawbacks, Mama is still effectively creepy, and quite compelling, filled with leads you actually care about and some interesting thematic stuff going on.  I wish the ghost story angle had been as unique as the rest of this movie, but even as it is, this is a remarkably strong first feature film for director Andrés Muschietti, who’s crafted a quite strong and visually striking (if rote) modern horror film.