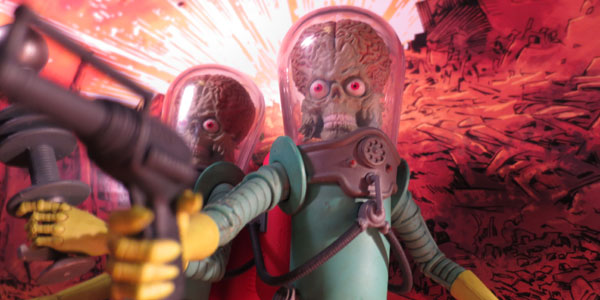 Mezco’s Mars Attacks! action figure captures the classic invader in all his glory.

Mars Attacks! has always been a staple of classic, pulpy sci-fi, and when Mezco first revealed their Martian soldier action figure at Toy Fair, I couldn’t wait to get my hands on one.  While the mediocre Tim Burton movie softened the legacy of the classic Topps trading card series, the recent resurgence of Mars Attacks! re-awakened my love of this gory, pulpy piece of pop culture, and Mezco’s action figure is right up there with the best Martian collectibles.

Mars Attacks! was one of the first frowned-upon properties, with the vintage trading card collection getting pretty graphic and nasty, especially when they were first released in 1962.  Fifty years later, the cards can still be quite shocking (the classic “Killing a dog” card being possibly the most notorious), but they were also packed with so much imagination they made themselves a nice little lasting legacy.  The design of the invaders was the most important part of this legacy, combining a retro 50’s spaceman aesthetic with creepy horror elements like the Martians’ skull-like faces, exposed brains and spindly limbs and appendages.

Mezco’s action figure perfectly captures the iconic look of the Martian invader, with a fantastic sculpt that nails every aspect of their unique and creepy look.  The sculpted detail of the face, the intricate design of the skeletal fingers and the sci-fi elements like the backpack and various weapons are perfect.  The figure features a healthy amount of articulation, including a swivel head, hinged shoulders and hips, hinged elbows and knees and swivels at the forearms and shins.  It’s a decent amount of articulation, especially considering the odd proportions of this otherwordly creature, and none of the joints interrupt the amazing sculpt.

The figure also sports some gorgeous paint apps, with a red wash on the Martian’s exposed brain that highlights the details, and an excellent wash on the space suit, which gives a remarkably convincing grungy, realistic look.  The creature’s bulging eyes stand out well, a striking white and red amid the more muted tan of his face. The Martian includes three weapons, a ray gun, a rifle and a staff.  All three look great, taken straight from the Martian munitions featured in the card series, and capture the same retro sci-fi vibe of the soldier’s space suit.

While I love the overall vibe of this figure, there’s a few little thing that could have made him even better.  The washes we get look fantastic, but I wish a black wash had been added to the skull face– on the cards, the Martians’ bulging eyes are sunken into the face, with dark rings around them.  There’s a natural shadow cast by the sculpt, but a painted highlight on the face would have made a better translation of the source artwork.  Also, while the articulation is solid, a few extra joints would have opened a lot more possibilities.  If the Martian included a bicep swivel, or even lateral movement at the elbow, he could have held his weapons using both hands.  This would have made the rifle look much cooler, as the way it is now, the invader can only wield even his largest weapon with a single hand.

The design issues are minor, compared to the overall perfect execution of this classic creature.  I never really though we’d get a truly great Mars Attacks! action figure, but after fifty years, Mezco’s take on the alien invader is outstanding, and a welcome addition to any collection.  The Mars Attacks! action figure  is available now at specialty retailers, and according to Mezco Toyz should also be carried at Toys R Us this Spring. 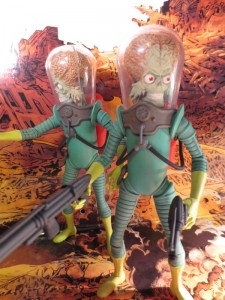 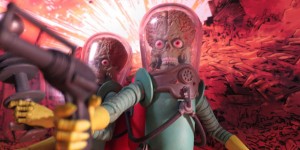 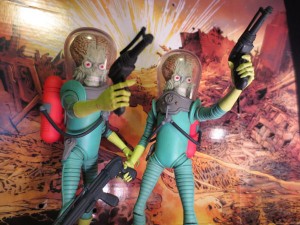 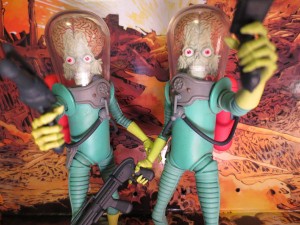 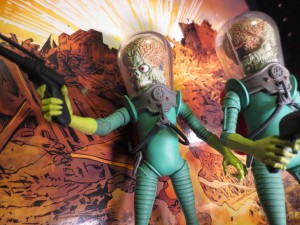 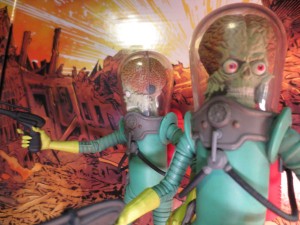 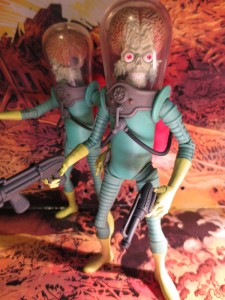 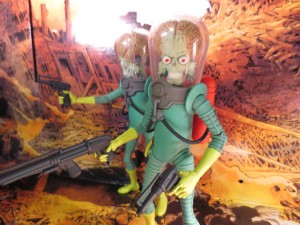 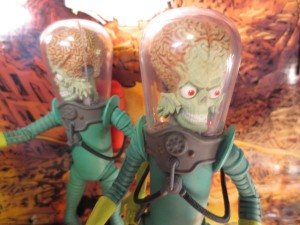 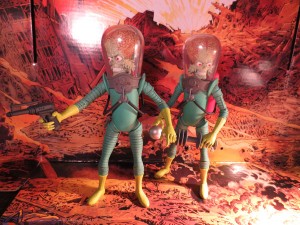 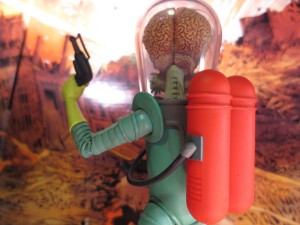 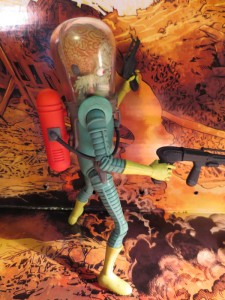 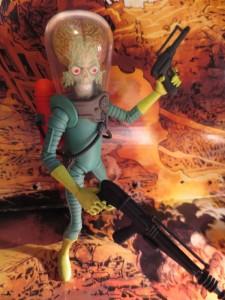 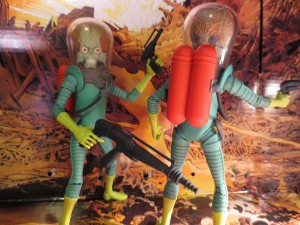 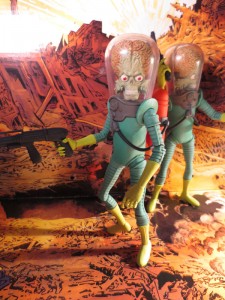 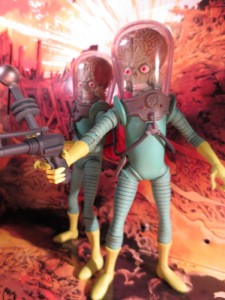 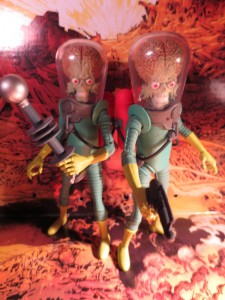