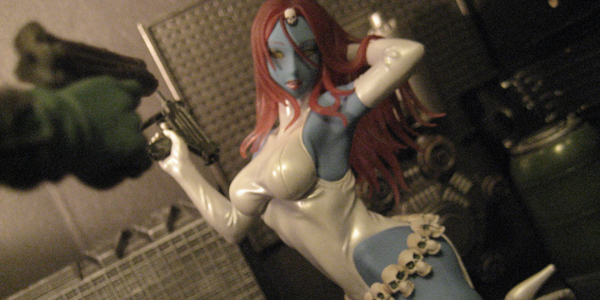 The latest statue in Kotobukiya’s Marvel Bishoujo series is X-Men villain Mystique. Striking a dynamic pose, the blue-skinned mutant terrorist looks as sexy and dangerous as ever, imagined perfectly in Kotobukiya’s long-running stylized series. Get an up-close look at the X-Men’s top femme fatale as she makes her Bishoujo debut… keep reading!

Kotobukiya’s Bishoujo series has had some fantastic entries within the Marvel line, featuring great new anime-styled renditions of the top heroines and villains in the Marvel Universe. Their recent switch to 1/7 scale, including Mystique, has brought about an even greater opportunity for detail in their figures which is blended perfectly with the stylized Bishoujo (or “Pretty Girl”) faces. Like the rest of the Bishoujo series, Mystique is based on original artwork by Shunya Yamashita, who proves once again to be a master at finding just the right pose for each iconic charater. Mystique is represented on her knees, arching her back with one hand running through her red hair, while the other hand playfully holds a gun. The pose is perfect for the frequently covert mutant, as she appears to have been spotted while hiding in the middle of a secret mission. Her loose grip on her pistol, combined with her sexy, come-hither facial expression suggest she’s about to use her feminine wiles to sneak her way out of danger, something employed many times by the character throughout her many comic appearances. Like the best of the Bishoujo figures, Kotobukiya expertly builds this sense of character-appropriate story into the sexy, pinup girl statue, and the result is attractive while remaining completely faithful to the villainess’ attitude. 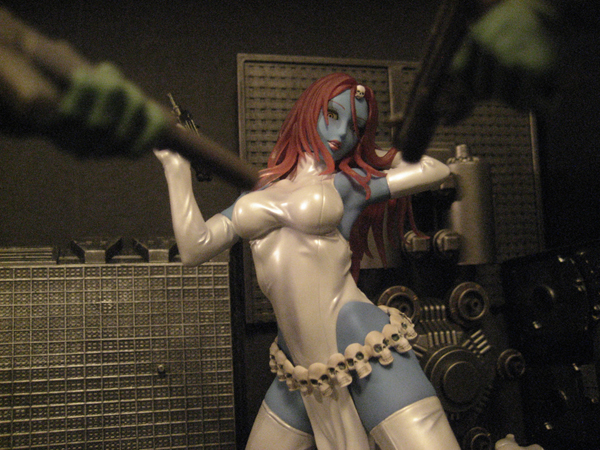 The sculpting on this statue is top-notch, and the final statue is a very accurate rendition of the original art by Yamashita. I’ve really dug the Marvel Bishoujo since Kotobukiya started the line years ago, but the recent up-scale in the size of the statues really allows them to incorporate a fantastic amount of subtle detail into the figure, something not as present on the smaller statues. The textured lines that trim Mystique’s dress are the perfect example of this added detail, which steps up the realism of the look, and minute details like the zippers on the inside of Raven’s boots are executed in painstaking detail. While the statue itself is very smooth, there is a wonderful sense of texture and depth conveyed by other small detail– my favorite is definitely the slight depression where Mystique’s skin-tight outfit meets softer parts of her skin like her legs. It adds a sense of softness to the distinctly feminine figure and really helps to up the overall realism as well.

Mystique is painted quite well, with an immaculate matte finish and wonderfully slight washes that convey the realistic look of the sculpt perfectly. The mutant’s iconic blue skin is colored very nicely in a pale blue that compliments the lighter skin tone seen on previous Bishoujo figures. Mystique’s hair is cast in a deep red that offsets her pale blue skin and lightly shaded white dress, and employs the same semi-translucent end tips that we have seen in the past few Bishoujo figures that once again adds a great amount of depth and texture to the figure’s overall appearance. 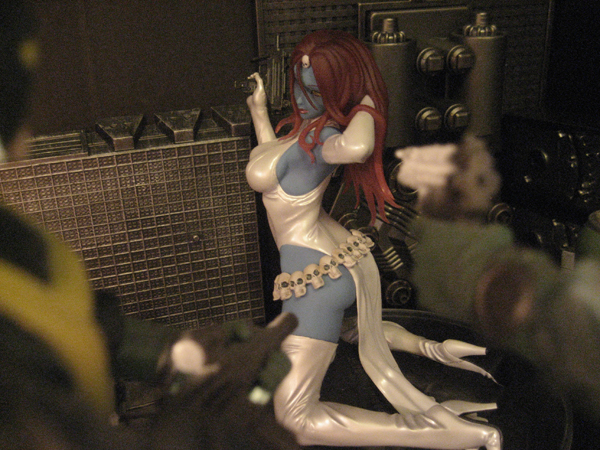 There are not many drawbacks to this Bishoujo statue, although I would have preferred to see Mystique receive her classic pupil-free yellow eyes. Instead she is given yellow eyes with green irises, that certainly don’t look bad but don’t quite fit the character. I’m willing to give this an easy pass, since large, expressive eyes are such a staple of the Bishoujo aesthetic, but the eyes on every Mystique I have seen appear to point down slightly too much, and it is one of the very few disconnects from the original Yamashita artwork, which had Raven’s line of sight illustrated much better. My only other critique is the plain base– Mystique’s stand is a simple, clear plastic circle on which she can kneel as her dress spreads out in front of and behind her. While there is nothing wrong with the stand, it is a bit of a disappointment only in how fantastic and inventive other recent bases have been– when Catwoman gets to skip on top of a Batman-themed gargoyle and the Invisible Woman playfully creates an invisible shield while in the palm of a giant Moleoid, Mystique’s plain, featureless stand seems like a step backward. 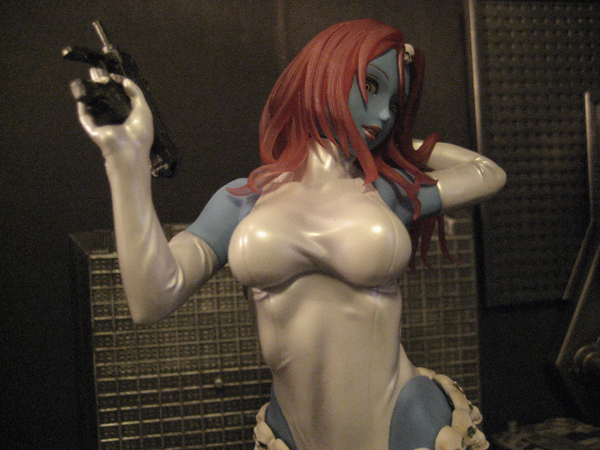 I have amassed a fairly decent collection of Kotobukiya’s Bishoujo statues, and overall Mystique is one of the highlights in my opinion. I have always been a huge fan of the X-villain, and Kotobukiya’s statue elegantly portrays both her sexiness and her sinister nature. It seems like each statue in this series brings about a greater sense of realism with the subtle and excellent sculpted details Kotobukiya’s team are able to work in, and Mystique is absolutely no exception. I love how well this detail integrates with the stylized Bishoujo face, and if future figures in the series can pull off this balance as perfectly as Mystique, my Kotobukiya Bishoujo collection will definitely keep growing!

Click Here to order your Mystique Bishoujo from Kotobukiya.