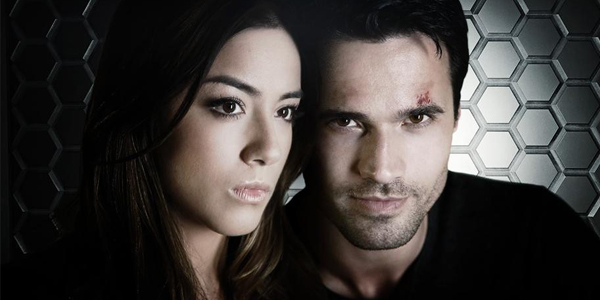 Agents of S.H.I.E.L.D. and Agent Carter will continue to bring the Marvel Universe to the small screen this fall, and we had the chance to talk a little about past and future with the casts.

Everyone is always trying to get the scoop at SDCC, wondering what will the actors let slip during interviews about their shows. The casts of Agents of SHIELD and Agent Carter were well versed in not letting anything slip this year, focusing on their characters past.

During press round tables the cast gave us some insight into the freshman season of Agents of S.H.I.E.L.D., and how keeping things not only from the audience, but also the cast can be a good thing. 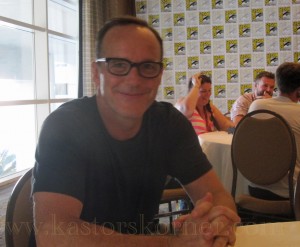 They’re both so damn fun. There is more time to get into the details, the minute details of scenes and kind of little story beats in the movies because you are basically doing in two months what we do in eight days on the show. With that said there is a helter skelter pace to doing the show that is really fun. Especially when the world of shield cracked open and crossed over with winter soldier, and suddenly you got Paxton and Sam Jackson and everybody showing up and blowing everything up and killing your friends and trying to kill the rest of them. That’s kind of fun doing three or four huge scenes a day… The pace is really what’s different. Also I guess for me in the TV show I get to go so much deeper into the world and life and job of this guy then I ever got to in the films and for that I’m really grateful to be exploring it on that level in the show.

Knowing details of show- Early vs. Learn as go

There is a real battle I have inside of me because the fanboy of me what’s to know, but you know I cant act it as well if I know too much. Its kind of like you don’t enjoy a joke if you already heard the punch line. My deal with them is that I need to know as much as Phil Coulson knows in any given scene.

How long did it take into the first season for you to find out that you were Hydra? 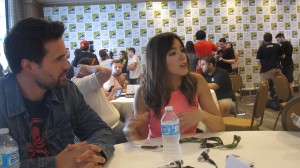 They didn’t tell me until about two weeks before, episode 16 they told me.

Do you wish they had told you sooner?

No, I would’ve tipped my hand. Its impossible to un-know something, and even like the two weeks where I knew something that not even the cast knew, I start second guessing every line I’m saying. Am I saying it like a hydra agent now? Its kind of a hard thing to do once you have all of that knowledge.

There is a depth to the character after they made that flip, which I feel like the were wise on as well. It was kind of interesting to read the reviews. They were very complimentary about the new Hydra agent, and then they were like, man he was boring before. So, its kind of like this double edged sword where they are giving me a compliment, but also kind of saying that other guy was block of woodish. But this is so much fun to play and the scenes are not action but they are acting oriented.

What can you tell us about season 2? 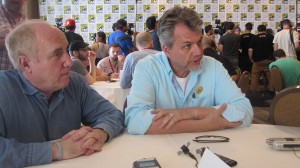 We can talk about what we just talked about in our panel. Having Mockingbird come in for a bit which is cool. Last year we also tried to name characters after existing characters like we did with John Garret and some others. Nick Blood is joining us as Lance Hunter, and our villain for the season is Reed Diamond who will be joining us as Daniel Whitehall. And then we are just absolutely thrilled to have Lucy Lawless come and join the team.

How tough was it to work in the Winter Soldier to the show?

Yes, it was because we knew who the villain was from the beginning, and we couldn’t say it. Over time, we had the Clairvoyant, and we had to find other ways to talk about who it was along the way. But  the other thing is that when you are doing twenty two episodes its very different telling a serialized twenty two episode than thirteen or ten or eight. And you know we have a longer throw, and it was a little slower build, but I think it all paid off pretty well and people seemed pretty happy.

One of the things that we are very excited about this season is that we have an opportunity to really see directors sort of rebuild SHIELD into whatever it is going to become because that will surprise you. And then at the same time when we go back  in time and we see agent carter we will see the beginnings of what shield was, so we really have an opportunity to be able to tell what it could be in the future, and what the dream was in the past.

One of the weirdly hard challenges of telling it from giant SHIELD is getting everybody to root for the NSA. We can tap every phone, we can listen in, we have all the power in the world. Its hard to feel like they are underdogs, its hard to feel like they are the good guys. Now that its all been blown apart, and we are in the shadows, and we really are underfunded its much easier for us to find where I think you can root for us and the kind of things we are trying to do in a world that has kind of been turned upside-down.

Is it easier to do things more creatively with a season under your belt?

Yes. But there is a different kind of pressure, which is now that it is not a secret that every single show gets looked at about are you going to have a sophomore slump. You know is the sequel better than the original movie, and I think that I can say that with all honesty, given where we are going if you really loved where we sound up, it just continues in that same vain at the same momentum, the same action with heart, the same kind of humor, and all of those things, but moving like a bullet train.

And we also got to talk with Hayley Atwell about being the star of her own Marvel show this fall. 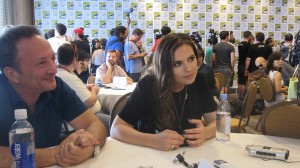 How do you feel about a show being created based on your character?

Its great. I mean it’s a dream come true. Its fantastic. I mean it’s a character that I’ve already kind of explored, and to revisit her and to make her richer and deeper and more interesting is such a great challenge for me as an actor. And I’ve already kind of broken the ice with these guys. I love working with them, so we  can just get so much more out of it because I already know what to expect from Peggy.

What’s it like to see where she ends up in Captain America 2 and to go back?

Its magical it was lovely to play that because she says In Captain America 2 that she had a life, and you see glimpses of her. Obviously, she is married and she’s had kids, and so we know she’s had this incredibly rich fulfilled life and probably has come to the end of her life and feels like she’s given it all she’s got, so that’s really great and now its just filling in the gaps of how she got there.

Could you have imaged going this deep into your character when you first received your role?

It’s like a dream. Its so surreal. I was so lucky to get Captain America. It was such a big turning point in my career and for my personal life and it changed my life. So, I have incredibly fond memories of that in the first place, but now to be four years later and still with Peggy and just even bigger and fuller and richer and deeper its just heaven. With these guys I’m in good hands.

How about the action in the show?

A lot of action. Punching, Kicking, Fighting, Jumping. I’ve got ten weeks to get my stamina up.

Have you come to appreciate late forties fashion?

I always have. I think it was a most elegant time for women. I just think that the Katharine Hepburns of the time had these beautiful silhouettes, very strong, but feminine and gorgeous was ideal for a woman’s body of that era.