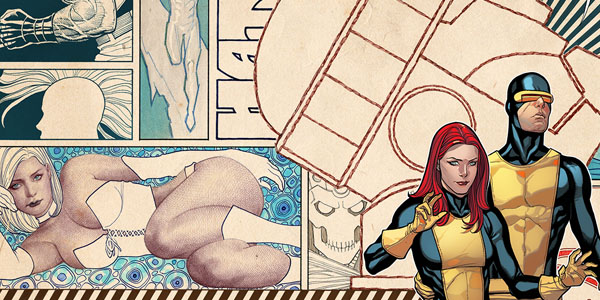 Battle of the Atom is raging in the Marvel Universe over multiple titles with the fate of the X-men hanging in the balance. This is one cross over event you can’t afford to miss.

When Marvel Comics announced their Marvel Now campaign some people groaned at another reboot to the universe. However it was not as dramatic or drastic as DC’s New 52. The Now campaign was a realignment of the numbering system and gave a chance to new readers who wanted a jump on point. Out of this new look fans got a story that none saw coming in The All New X-Men. All the X-titles have been an amazing read since the relaunch, but All New X-Men has stood out above the rest.

The story started with an idea, Beast had to try to bring Cyclops back into reality. So Beast went back into time and pulled the original five X-Men (Cyclops, Jean Grey, Iceman, Beast, and Angel) into the current time stream to help the fallen leader. He thought that a younger Cyclops could talk sense into the current Cyclops following the events of AvX where (SPOILER ALERT) Cyclops killed Charles Xavier. Since the younger team arrived they have been learning things about their futures that have been doing some damage to the time stream.

This month started the story arc Battle of the Atom written by Brian Michael Bendis and a team of artists that have done a really great job. The art team is too large to name since this cross over takes place over all the X-titles and they all have awesome teams. The story makes total sense and is in no way confusing to read, unlike the Avengers Infinity story line which is the total opposite.

There have been 3 issues so far and what we have gathered is someone is sending Sentinels to intercept the X-Men when they go into battle. Kitty Pryde leads the original X-Men as their mentor into battle alongside the Uncanny X-Men lead by the current time Cyclops and they join forces to fight off the Sentinels. The all female X-Men team lead by Storm jumps in as well to lend a hand. In this battle the younger Cyclops is critically injured and this event wipes the current Cyclops out of existence for a brief minute as the younger is healed by one of the Uncanny X-Men new characters, Christopher Muse. This event starts a chain reaction that gets the attention of the X-Men of the future, lead by Charles Xavier’s grandson and a mystery masked figure, and they travel back in time to send a message and the person who is sending this message is a surprise you have to see in Chapter 2 (All New X-Men #16) when she removes her mask.