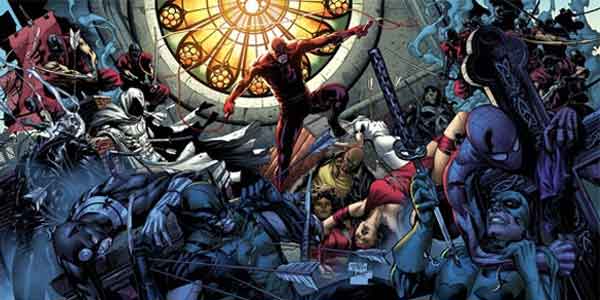 There’s been some buzz for a few weeks now about Marvel shopping a package deal that would include four new 13 episode TV series, which would all relate to an attached miniseries.  Rumor had it Netflix was very keen to pick up the mysterious set of shows, and now they officially have!

Starting in 2015, Netflix will begin releasing the first of four new hourlong Marvel shows, all based on the street-level heroes of NYC.  The four shows will focus on Daredevil, Jessica Jones, Iron Fist and Luke Cage, respectively, and will lead in to a miniseries where the four heroes of Hell’s Kitchen team up to form the Marvel Studios version of The Defenders.

I’ve long believed that daredevil was best suited for a TV show, chronicling Matt Murdock’s legal drama by day and Daredevil’s vigilante exploits by night.  Iron Fist and Luke Cage are two old school heroes who have been brought into the modern day very well over the past half-decade, so I’m equally interested to see what their live action adaptations will be.

Jessica Jones, in case you didn’t know, is the ex-super hero created by the loathsome Brian Michael Bendis, a former super hero turned private investigator, and the star of two of Bendis’ last good comic books, Alias and The Pulse.  While I have little love for her creator, Jones was a great character, and much like Agents of S.H.I.E.L.D., I can see her human perspective on this comic book world offering an interesting fresh new take.

The most exciting thing about this to me is the mix of characters.  While all our big screen Marvel heroes have followed the white male archetype (to some degree), this set of shows will feature an African American hero, as well as our first female protagonist, adding some welcome diversity to the House of Ideas’ live action stable.

This feels like a HUGE step forward for Marvel, who has really made a name for themselves for taking big steps… that these new shows will launch in 2015– the same year we get Avengers Age of Ultron and the beginning of Phase 3– proves that they’re certainly not planning to rest on laurels anytime soon.

Here’s the official word on what to expect from the Netflix series:

Led by a series focused on “Daredevil,” followed by “Jessica Jones,” “Iron Fist” and “Luke Cage,” the epic will unfold over multiple years of original programming, taking Netflix members deep into the gritty world of heroes and villains of Hell’s Kitchen, New York. Netflix has committed to a minimum of four, thirteen episodes series and a culminating Marvel’s “The Defenders” mini-series event that reimagines a dream team of self-sacrificing, heroic characters.