Marvel and Netflix Just Upped the Ante with Luke Cage, Iron Fist, and The Defenders 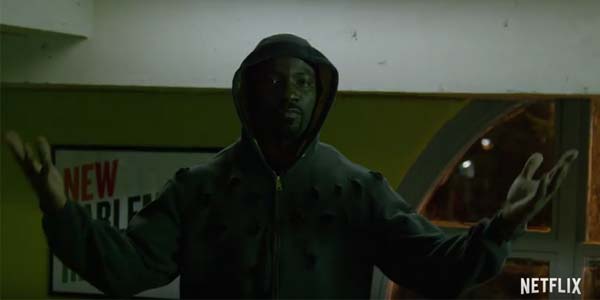 Yesterday Marvel and Netflix released two trailers for Luke Cage and Iron Fist and a teaser for the MUCH anticipated Defenders.

Comic book geeks rejoiced when these anticipated series trailers finally were shown. Luke Cage got a big bump in popularity during the Jessica Jones series and with the trailer set to ODB’s ‘Shimmy Shimmy Yay’ lyrics instantly (I know I was like HECK YEAH!) it got people’s attention. We see a common theme with a hallway fight and yes it is EPIC. Mike Colter looks the part, acts the part, and personifies the character perfectly!! Luke Cage season 1 drops on Netflix on September 30th.

Next show that Netflix and Marvel has been working on is Iron Fist. Danny Rand returns to New York City after being missing for years, trying to reconnect with his past and his family legacy. He fights against the criminal element corrupting his world around him with his incredible kung-fu mastery and ability to summon the awesome power of the fiery Iron Fist. This character may be obscure but I think he will fit just fine within the Netflix Marvel Universe. Fans of the show Game of Thrones will recognize the main actor (Finn Jones) and from the look of the trailer he has done his homework to bring Danny Rand to life. Look for this series to drop in 2017.

Finally we get a teaser of the very fan demanded show…The Defenders. This series brings together Daredevil, Jessica Jones, Luke Cage, and Iron Fist team up to fight crime in New York City. These are usually presented as a “non-team” of individualistic “outsiders”, who in their prior adventures, are known for following their own agendas. We do not see any actual footage, but there is audio to get you hyped up and with the addition to some fantastic Kurt Cobain lyrics I am already all in!! The Defenders will be released to the world in 2017 as well.

With all the addition of these shows and character to the Marvel Universe one can ask will these characters be added to the roster for the up and coming Infinity War movie or will Marvel pull a DC move and keep these universe separate?