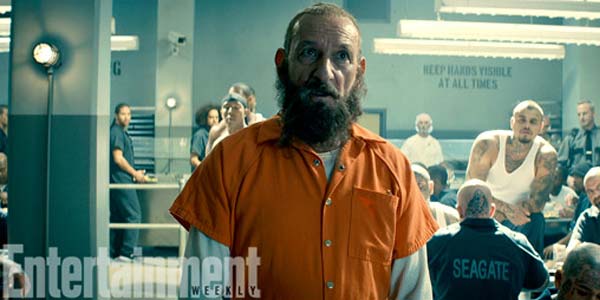 The next Marvel One-Shot, “All Hail the King” will deliver the continuing adventures of Iron-Man Three‘s bumbling villain Trevor Slattery.

EW has revealed that the new Marvel One-Shot, the 14-minute “All Hail the King” that debuts next month on the home release of Thor: The Dark World, will be an encore performance by Sir Ben Kingsley’s movie Mandarin, Trevor Slattery.

As a big proponent of Iron Man Three, twist reveal of Mandarin’s true nature and all, I’m totally excited to see more from the hapless Trevor.  And from the look of things, the new 14-minute short film will finally tie together the actor-turned villain and the 10 Rings organization we’ve been seeing since the first Iron Man movie.  Says Pearce, who wrote Iron Man Three and the new short:

“Imagine a real terrorist organization whose beliefs were long held and religious for thousands of years, and imagine a drunk, British actor coming along and essentially telling the world that he’s the face of your organization.  I think they would be right to be quite angry.”

I’m hoping what we do NOT get is a reveal of a “real” Mandarin.  Yes, the character works as Tony Stark’s arch nemesis in the comics, but I don’t see him bringing anything new to the table as a movie villain.  Any purpose a legitimate movie Mandarin would have has already been successfully divvied up between Slattery’s fake gravitas in the third movie, and the 10 Rings as a terrorist cell, much more believable than a ring-wielding racial stereotype of a bad guy, in my opinion.

Agent Carter was a hell of a short, able to tell a solid short story very well, while expanding both the world of Captain America and the larger Marvel cinematic universe.  I’m hoping “All Hail The King” does the same when it gets released next month.

Get the full story, more photos and a chat with writer Drew Pearce at EW.