Marvel Phase One Gets A Release Date & New Stuff 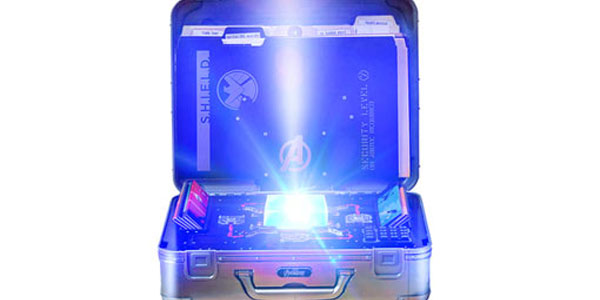 The bad news: the Marvel Phase One DVD set is still delayed until 2013.  The good news: the set finally has a release date… and lots of hints on new material to be included.

Entertainment Weekly got the scoop that the long-delayed Marvel Phase One box set will finally see release on April 2, 2013.  The 10-disc set will collect all the Marvel Studios releases building up to (and including) The Avengers, along with a crazy amount of supplemental material.  It was planned to hit before the holidays, but a legal issue with the packaging– modeled after the suitcase containing the Tesseract in Thor— lead to the delay.

Ever the opportunists, the Marvel Studios folks are taking advantage of the extra time to add more special features to the set, likely to justify its considerable price hike (current retail price is looking like $219).  While that may seem like a steep price, it looks like the set will have a LOT of extra features which are perfect for die-hard fans of Marvel’s cinematic universe.

“We spent an embarrassing amount of time compiling the ‘Shield Files’ included in the box set to be sure that each character’s file was full of great, movie-accurate props and Easter eggs, which help tie all of the Phase one [Marvel Comics Universe] films together,” Marvel’s Kevin Feige told EW in their interview.

On top of looking backwards (including some previously-unreleased deleted scenes for most movies), the upcoming Marvel Phase Two will get a lot of focus in this set.  Feige hints there will be a clue for Iron man 3 in Tony Stark’s file, and I wouldn’t be at all surprised to see lots more goodies from the upcoming slate of movies– Edgar Wright’s Ant Man footage debuted to wild applause at Comic Con, so that seems like a surefire bit to include here, and both Thor: The Dark World and Captain America: The Winter Soldier will either be finished , or close to done with shooting by the time the set is released.  I would not be at all surprised to see some new footage from both of those projects.  If we get any new glimpses of the movie I’m most excited for, Guardians of the Galaxy, all of the sudden that price tag seems much less balk-worthy.

Read the full story on EW for more from Feige, and an unseen clip from Thor.