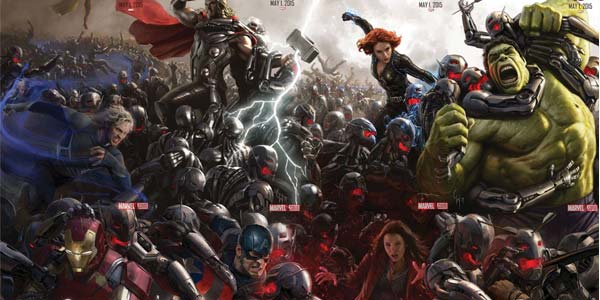 The cinematic Avengers assembled at Comic Con, and they brought some footage from next summer’s epic sequel.

Marvel Studios’ Comic Con panel was a let down, news-wise.  The only headline that really came out was the Guardians of the Galaxy sequel…

Beyond that, most of the panel was coasting on the incredible rock star charisma of the utterly perfect cast of the Avengers, who all took the stage like the goddamn rock stars they are in Hall H last night.  They answered some questions and quipped, before sharing a first look at Avengers: Age of Ultron.

And it sounds utterly incredible!  The clip started with the party The Avengers throw after bringing down Baron Von Strucker, as each hero attempts to lift Thor’s hammer.  Obviously, no one can… but Captain America makes it budge, which really troubles the Son of Asgard.  How great is that for a super hero party game?

The party scene bleeds directly into the reveal of Ultron, before jumping to a sequence of action clips showing off, among other things, Tony Stark’s Hulkbuster armor, action beats for each of our heroes, and the reveal of Ultron in his final, 8 foot tall form.

Oh, and THEN it gets crazy… We see the full team, brutally beaten and possibly dead, on what appears to be Thanos’ asteroid.  Tony looks at his fallen friends, and Cap’s broken shield, in horror.  Likely this is a vision projected by the Scarlet Witch, but either way, it’s a hell of a dark visual to end the clip on.

Usually Marvel is more than happy to re-play their Comic Con teasers, but this year no dice.  That makes me think it’s even less likely than usual that they will share the clip online, which is a shame, because after reading all these rundowns of the footage, I am DYING to see this immediately.

Get more details on the screening at /Film.