Marvel Select Cable: Over The Top, Yet Underwhelming 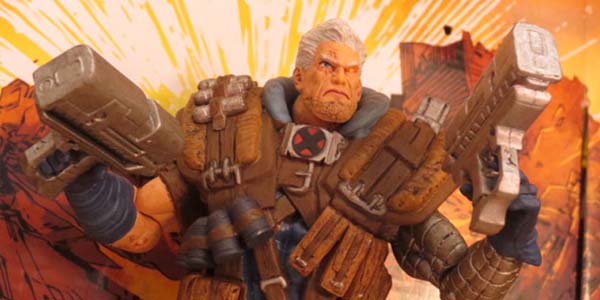 A look at an amazingly sculpted figure that brings the inherent flaws of 90s excess to the third dimension.

For me, there is no era in comic history more confusing, contradictory and confounding than the early 90s.  The books in this age of excess were the ones with which I am most familiar– I pored over issue after issue of X-Force and Ghost Rider and adjective-less Spider-Man month after month, over and over while I awaited the next issue in the series.  The nostalgia factor for me and these books is HUGE.

But when it comes to quality, as many of us have realized, a lot of these books just don’t hold up.  The same goes for characters– When I was 11, I thought Cable was the coolest!  This guy had a robot arm, a glowing eye, face scars, big guns and pockets for everything.  He was a cool guy!

I’d be lying if I said there wasn’t still a special place in my heart for Cable, but I realize he’s earned that keep based only on nostalgia.  When describing his Cable surrogate character from Kingdom Come, Mark Waid said this mutant hero was the best representation of everything that was wrong with early 90s character design.  His costume is overly busy, filled with cheap shorthand signifiers of what a “badass” he is, and worst of all, it’s pretty damn impractical.

There’s a reason I’m telling you all this in what should be a review of Marvel Select’s new Cable action figure.  I’m trying to offer some context as to why I’m so very torn on this figure.  He has his definite merits– the all new sculpt is highly detailed, capturing the Cable of the early 90s X-Force perfectly– but the figure is not without some severe faults, all of which can be attributed to that same excess and overdesign that made this character so goofily flimsy when looked at through eyes more discerning than that of an 11 year old.

I’ll start with the positives, and the best feature of this figure is the sculpt.  There’s a ton of detail packed in to Cable’s paramilitary gear, and it offsets nicely against his more streamlined cybernetics.  I always think it’s fun when an action figure is rendered with a real life person as the facial reference, and while I can’t confirm this, the Cable figure bears a strong resemblance to Ron Perlman in my eyes, which is actually pretty decent fan casting. 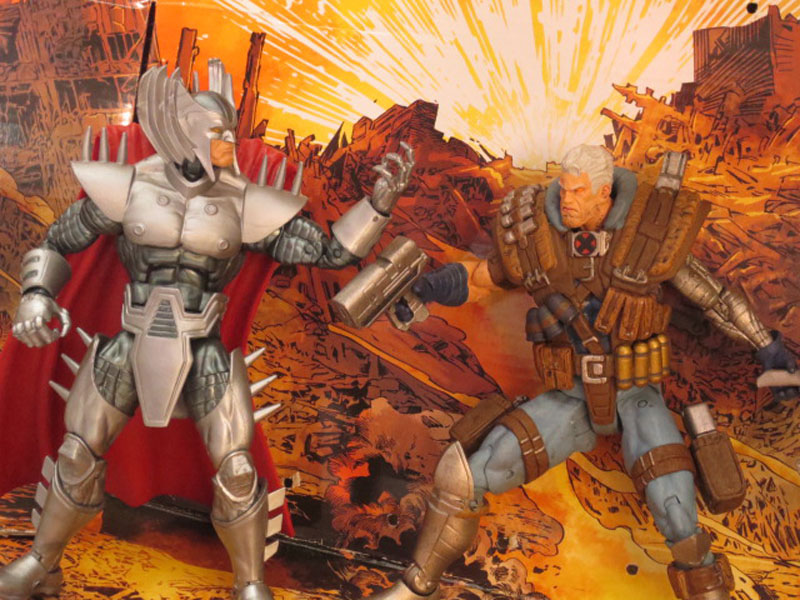 The color work on this figure is also very nice, with subtle washes adding a sense of lived-in realism to the sci-fi oriented character, and the light blues of his costume really pop against the silver boots and arm and earth tones of his shoulder pads and harness.  Cable is a very good height, as well.  He’s in scale with the other 7″ Marvel Select figures, but he can almost bridge the gap and fit in with Hasbro’s Marvel Legends, as well.  He’s just a bit too tall compared to his dark mirror Stryfe, but I think the two still look good together.

Speaking of Stryfe, while the villain is not on the Marvel Select team’s immediate radar, his iconic helmet– probably the second best visual metaphor for 90s excess– is featured on Cable’s display base, which helps the fairly top heavy figure stand in place quite well.  The mutant hero includes multiple guns, as well, including a matching pair of laser pistols with leg holsters, a smaller handgun which also includes an adapter for the holster, a medium sized gun (which is supposed to connect to his shoulder pads, but doesn’t actually seem to), and a cartoonishly big weapon like the ones he used to carry around in the pages of Rob Liefeld’s comics.

So we’ve got a great, all new sculpt and loads of accessories… what’s the problem?  It’s this bulky, overly complicated design, the same one the sculpt nails so perfectly.  The impracticality of the piles of military gear Cable wears has long been one of the biggest critiques of the character, and this figure embodies that problem, because he can barely move.

Virtually none of Cable’s fairly ample articulation actually works.  The ball joint in the neck is rendered useless buy the collar of his harness.  His shoulders are buried underneath the absurdly huge shoulder pads, meaning they limit the range of his arm movement, and his bulky harness prevents his from even resting his arms at his sides.

The junk on Cable’s body means he doesn’t get any torso articulation other than a swivel waist… meaning the first actually useful bit of articulation he gets is below the waist.  The hips, knees and ankles are good, but that’s it– the top half of this guy is, in effect, a statue.  And it all goes back to that over-the-top character design… the one so many have said could not exist in real life.  Their point has been proven, courtesy of this figure.

Your take away from this figure might be different than mine.  I appreciate the wonderfully detailed sculpt and the commitment to the questionable character design by Diamond Select’s team.  It’s just a bummer to have the final product suffer so greatly, and be so limited, simply by realizing its impractical source material too well.  Look for Cable at your local comic shop or specialty shop now. 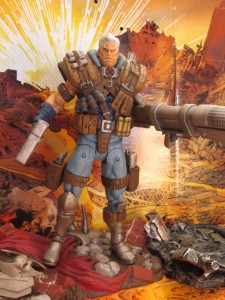 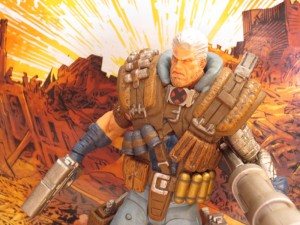 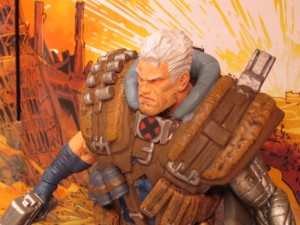 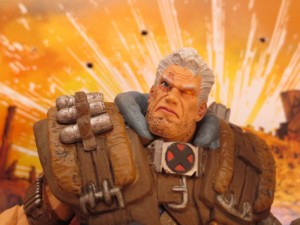 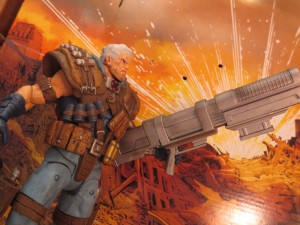 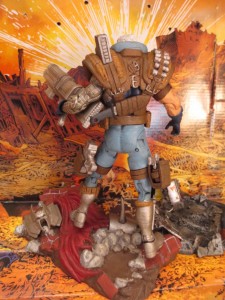 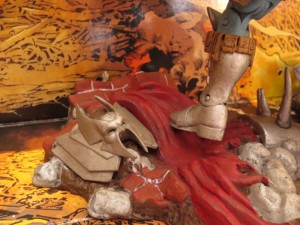 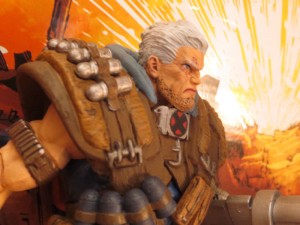 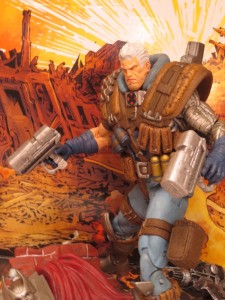 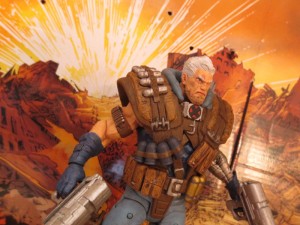 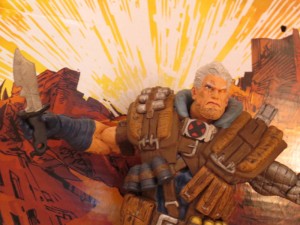 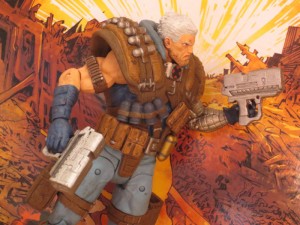 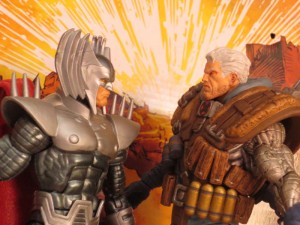 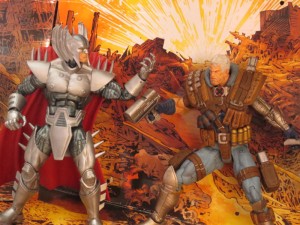 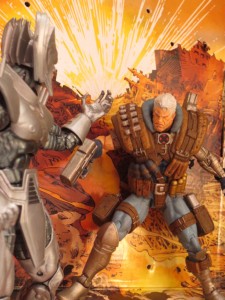 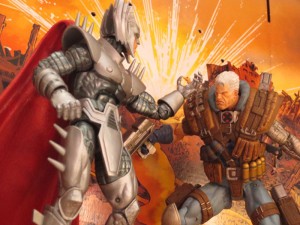 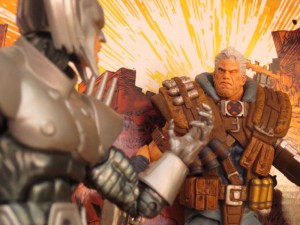 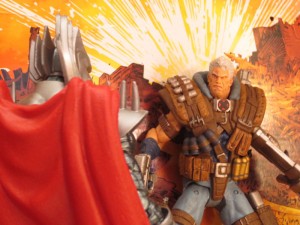 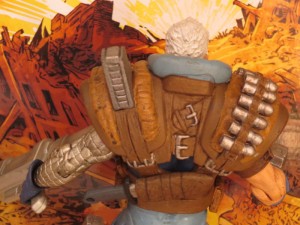 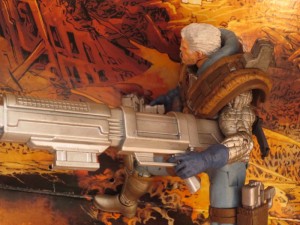 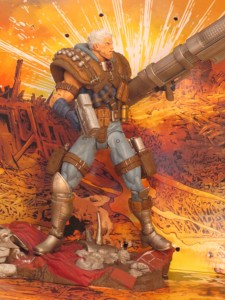 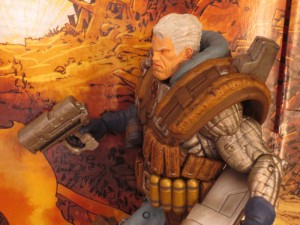 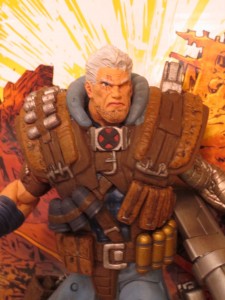