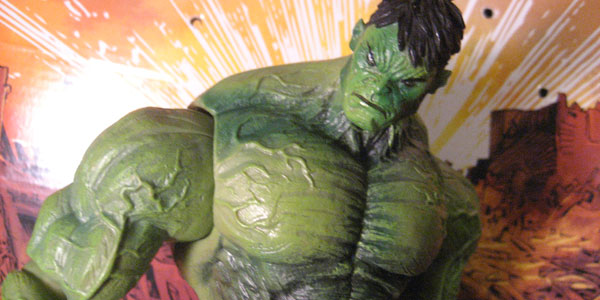 Marvel Select’s Disney Store exclusive Hulk may be my favorite toy take on the Marvel hero.

Marvel Select has teamed up with the Disney Store to release three new exclusive figures this Holiday season.  The first one to hit shelves is the new Hulk Unleashed, based on the green giant’s appearance in Jason Aaron and Marc Silvestri’s recent run.  As you might expect, then, Hulk Unleashed is a fairly artist-specific take on the monster, and this figure does a wonderful job of translating Silvestri’s famous art style. 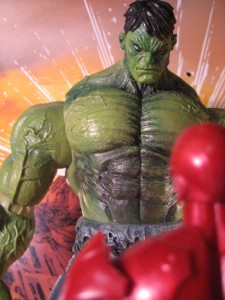 Hulk Unleashed is an enormous figure, one of those toys whose heft is impressive both in the package and out– this guy is one big chunk of plastic. Despite his size, Hulk still includes an impressive amount of articulation– he gets a ball joint head, swivel waist, ball shoulders and elbows, ball hips and knees, thigh and wrist swivels, and hinged ankles.  For a dude this massive, that’s quite a few moving parts, and each one is fully functional and useful.

I’ll admit I’m not much of a Marvel Select guy– I’m one of those collectors who only goes after the figures that can be worked into my slightly smaller-scale 6″ Marvel Legends collection.  Clocking in at more than 9″ tall, this Hulk is so big he’s pushing the boundaries on fitting in with the Legends scale, but he’s the Hulk, so size shouldn’t be a deal-breaker.  Especially not when the figure looks this cool.  I have never seen a Hulk figure packed with more detail, as every vein and striation and cross-hatch of Marc Silvestri’s signature art style is brought to life in this amazing sculpt.  From Hulk’s angry scowl to his impossibly massive arms to the tatters and tears of his pants, this figure nails Silvestri’s art so perfectly, you’d swear the toy just walked off the page of your comic book. 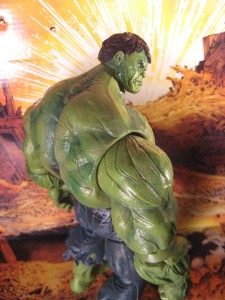 There’s one element of the figure which has been debated on a few boards– the paint apps. Hulk features a few washes, some of which are fairly uneven, especially on his face and torso.  I respect the ambition behind this paint job– for an all-green dude, Hulk Unleashed sports at least half a dozen different shades and tones, many of which do a brilliant job of highlighting the super-detailed sculpt.  There’s a bit too much paint on his abs, as well as just above his pecs, which from certain angles does look unbalanced.  Likewise, Hulk’s face has some nice shading, but every figure I’ve seen has a patch of dark green on the left of his nose– whether this was intended to be a shadow or just a paint error I am not sure, but it’s not the most natural placement.  Even these dodgy areas are painted well, and serve to highlight the sculpt.  I think if the rest of the paint hadn’t been as impressive and well-executed, the few areas where it seems overdone wouldn’t be as noticeable– the head and torso paint apps aren’t bad, they’re just not as well-handled as Hulk’s arms and legs. 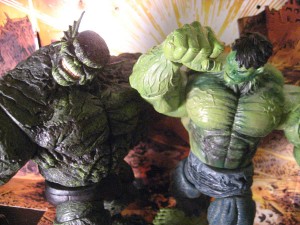 Hulk is one of those characters where I tell myself I’m done buying.  I have so many variants of the big green guy, it’s not even funny, but when I saw this new Marvel Select version, I thought he might be worth picking up.  With a fantastic sculpt based on artwork from a modern comics icon, and excellent sense of mass and scale, and generous articulation, Hulk Unleashed is well worth it.  If you have a Disney Store near you, he should be hitting any day now (to be followed shortly by The Lizard and Flash Thompson as Venom).  If you don’t have a local Disney Store, Hulk is also available on their website– Click Here. 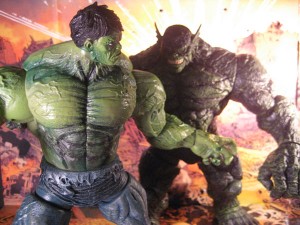 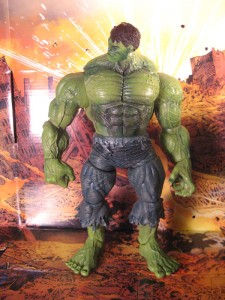 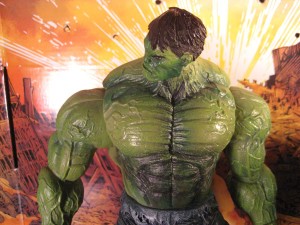 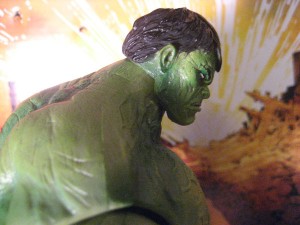 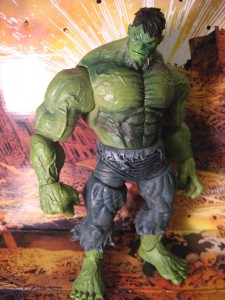 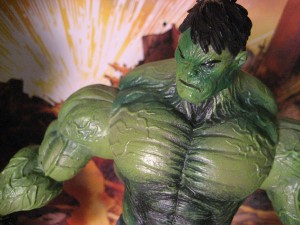 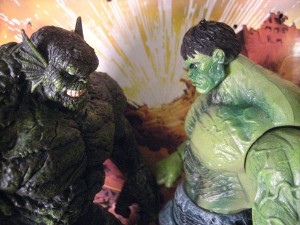 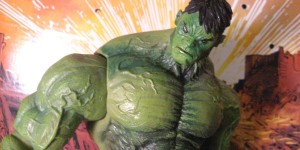 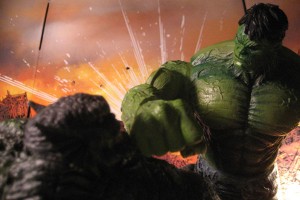 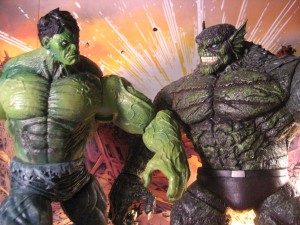 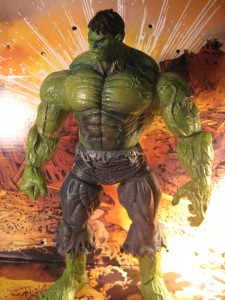 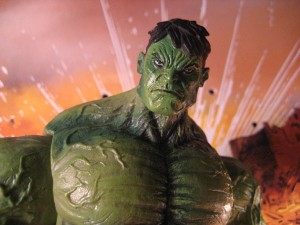 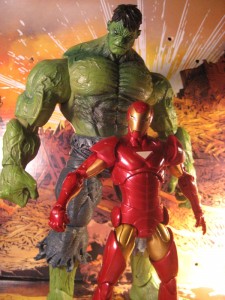 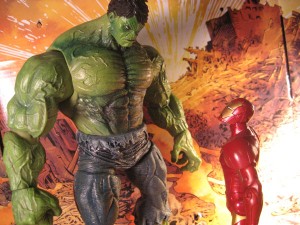 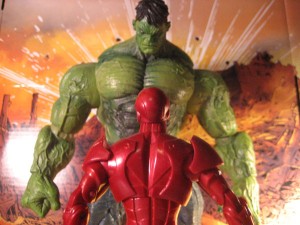