Marvel To Announce Guardians Of The Galaxy Movie At Comic Con… What’s The Roster? 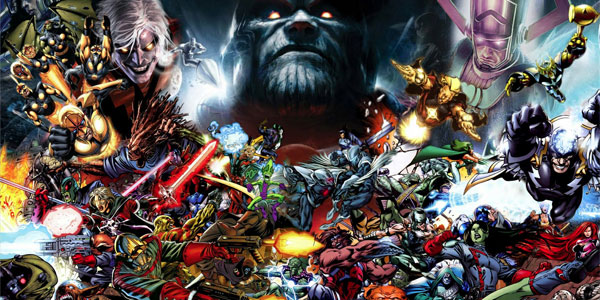 It looks like the cosmic cat is out of the bag– Latino Review is reporting Marvel Studios will announce Guardians of the Galaxy as their next big movie at Comic Con.  Guardians is expected to be released in 2014, and will tie in directly to The Avengers 2.  But who will the Guardians be?  Here’s our best guesses…

Guardians of the Galaxy makes total sense as Marvel Studios’ next step, as they continue to expand their film universe. The Avengers went bigger than we’ve seen so far, and the reveal of Thanos during the credits leaves the door wide open to go even bigger– and cosmic!  While space-faring heroics didn’t exactly work out for Warner’s Green Lantern, the promise of a good script and an ambitious sense of scope mean GOTG could very well be something special… a bridge to gap both comic book movies and grand sci-fi space epics.

While it’s obvious Thanos will make his rounds as the heavy in GOTG, what’s interesting now is the question of who exactly will make the cut for the team’s roster.  There’s been a few different incarnations of the Guardians in the comics, from the mid-90’s team lead by Vance Astro (they were set in an alternate future timeline, but later time traveled back in time to meet The Avengers), or the recent Annihilation era take, which was composed of “all-stars” of the cosmic Marvel Universe, such as Adam Warlock and Drax the Destroyer.  There’s a lot of characters to pick and choose from, so just for fun I wanted to go through some of the past members from the comic, and their likelihood to join the cinematic team.

1. Major Victory – Vance Astro has been a mainstay of the Guardians in many different incarnations, and as a human from our Earth he’d be a relatable POV character, as he (and the audience) discover this epic universe filled with aliens, eternal beings and more. Major Victory had a lot in common with Captain America, as another man out of time– Astro set out for the Alpha Centauri system in stasis, only to have the rest of Earth beat him there due to advances in space travel. He also went on a quest to find Cap’s shield, which he later adopted as his own, along with a Cap-inspired costume. Whether the movie Victory is based on his own exclusive comics history, or a fusion of other Earth-bound heroes such as Starlord or Nova is a mystery, but I think it’s a safe bet we’ll see some version of him on the big screen.

2. Star-Lord – Peter Quill is another Earth man sent to the stars, and the gun-blazing hero became the leader of the Annihilation era of the team. He’d be an easy character to adapt to the big screen, and with his cybernetic gas mask and WWI-style helmet, he’d be a very cool looking character.  A master strategist and experience warrior, Quill would make a great character to take Vance Astro under his wing as he is introduced to the cosmic universe.

3. Drax the Destroyer – Drax is a heavy hitter in the Marvel Universe, and he’s been a big push for the company in recent years, with lead roles in many modern GOTG storylines and a pair of action figures from Hasbro in the last year. Drax has had a few striking looks (including his recent shirtless look with the glowing red tattoos), all of which would translate nicely to the big screen… and capitalize on the Hulk craze from The Avengers, as the Guardian’s own big green badass.

4. Moondragon – Moondragon has been a regular in Marvel’s cosmic history, showing up everywhere from the Infinity Watch to the modern day Guardians team, and she’s had history with Thor and the other denizens of Asgard. She’s a cool character, visually striking (a hot, tough bald chick), and the daughter of Drax, so there’s a lot going for her being included here. As a peak specimen of physical perfection, Moondragon would be a formidable teammate or foe, as she’s switched allegiances multiple times in the comics throughout the years.

5. Quasar – Quasar has been a major player in Marvel’s cosmic landscape for decades, and the power gauntlet-imbued hero has been through lots of changes, including his death and eventual return of Quasar (now called Martyr) as a female. If Marvel is going to shuffle around continuity, it would be cool to see classic Quasar die during GOTG and return in her current form during the movie, or whatever comes next for the Guardians.

6. Rocket Raccoon – Perennial fan favorite, I think Rocket Raccoon is practically a given. Kevin Feige of Marvel Studios loves the gruff little guy, and so does virtually everybody else… and the inherent goofiness of a talking raccoon would certainly help Marvel in their constant efforts to never get too grounded or dour in their movies.

7. Starhawk – One of the most interesting members of the Guardians, Starhawk was for a time actually two beings– Stakar and his adoptive sister Aleta, who took turns occupying the physical form of Starhawk. Fated to relive his life over and over, Stakar, the self-titled “One Who Knows” would often bend things to shape his personal benefit, with both good and bad results. His tampering with the timeline lead to the formation of the Guardians of the Galaxy, but Starhawk’s motivations have typically been self-guided, ensuring his inclusion on the movie’s team would make for an interesting questionable allegiance, or potential double-cross.

8. Yondu – The Centaurian hunter Yondu is the first alien Vance Astro encounters upon his arrival, and the two team up to face the Badoon, forming the original lineup of the Guardians in the process.  The warrior would be another great character to include visually, with his blue skin and fin-like mohawk he’d be a very distinct screen presence. The tribal Centaurian was also a master with his bow and arrow, making him a great parallel to Hawkeye for the intergalactic team.

9. Gamora – Gamora is another long-time cosmic character who would fit right in to either a retro or more modern spin on GOTG. With ties to virtually every character (her race was eradicated by perpetual GOTG enemies the Badoon, Thanos trained her, she later joined Warlock’s Infinity Watch, and more recently hooked up with Nova), she would be a definite addition to the roster.  And if Star Trek taught us anything about sci-fi, it’s always good to have a green-skinned girl around.

10. Adam Warlock – If Marvel Studios is smart (spoiler: they are) they’re building toward a cinematic take on the Infinity Gauntlet, one of the biggest stories in the history of the Marvel Universe. There’s no way to do that story without Adam Warlock, who’s essentially the main hero, so the modern Guardians and former Infinity Watch member seems like the perfect candidate to introduce in GOTG before he takes center stage against Thanos for the Infinity Gauntlet.

11. Groot – There has to be a few really funky aliens on the roster (how dull would a cosmic hero team be if they were all just normal dudes?), and Groot is one of the coolest, most visually striking aliens from the Annihilation-era team.  A humanoid tree, Groot can change his size drastically, and can resurrect himself if his body dies, making him one of the most visually striking team members imaginable.

12. Nova – Granted, Richard Ryder was never really a member of any incarnation of the Guardians… however he was a key player in many of the current team’s biggest storylines, and including Nova– a member of the VERY Green Lantern-esque Nova Corps– would be a great way for Marvel to stick it to DC on how to deliver when it comes to huge super hero space epics.

Here’s hoping we’ll find out the real roster of the Guardians of the Galaxy next week at Comic Con.