GET IT EARLY ON DIGITAL 3D, DIGITAL HD AND DISNEY MOVIES ANYWHERE November 17, 2015 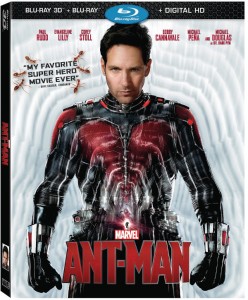 Marvel, the Studio who brought you “The Avengers”, now brings to life one of the original Avengers—Marvel’s Ant-Man. Bring home the epic heist as Ant-man embraces his inner hero and harnesses the unique ability to shrink in scale to save not only the world, but his daughter. Full of both humor and heart, Marvel’s Ant-man is the perfect gift this holiday on Blu-ray and Digital HD