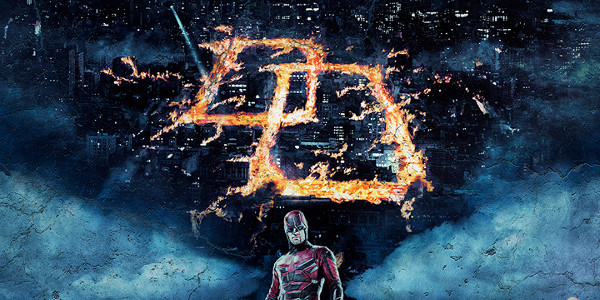 The first season of Marvel’s Daredevil showcased some of the most impressive stunt work seen on television today. In approaching the second season’s stunt sequences, the show’s stunt and fight coordinator, Philip Silvera says it wasn’t so much about upping the ante for the sake of packing the show with more fights, but rather continuing to tell the story of these characters in the right way through action. “For me, because I’m such a huge fan of these characters, and I grew up on comic books, I know these characters intimately, so when we’re designing the sequences, I think about those characters a lot and who they are and how they would react to certain things. The fight coordinators and stunt doubles really look into what the character would be doing and where they are at in this point of the story and that affects the action in a great way.”

For Jon Bernthal, he quickly noticed that this production was producing movie quality fights, ones that not only upped the ante in terms of compelling stunt work, but that they were also committed to delivering in terms of an emotional story behind every punch. “Phil Silvera is a genius of a coordinator. The stunt team, Chris Brewster and Eric Linden, are just phenomenal, the best I’ve ever worked with. They are so ambitious and they pull off these miracles. I think that to get film quality stunts and fights packed into this tight TV schedule, it is a serious feat and you’ve got to be willing to get banged up. You’ve got to be willing to dive in.”

Silvera says, “Jon is one of the hardest working actors I’ve ever had the pleasure of working with; he’s a lot like Charlie where they both put themselves into these characters and you can’t help but want to give them your all because they’re giving it their all.” In looking at designing the different styles of fighting between these two iconic characters, Silvera and his team started from a place of common ground. “Frank and Daredevil are at opposite ends of a spectrum, but yet both are still on the same spectrum”, Silvera says. “They have a middle ground in that they’re both really brutal and they both have a very intense way about them. With Daredevil, he won’t cross the line and kill, whereas Frank has no problem with that, so I think that’s the biggest difference, but Frank also has a militant and tactical background. He knows how to clear a room in the right way so he’s going to approach things in a certain way from a distance before he even gets in close, whereas Daredevil is a little more head on.”

Elodie Yung came to the role of Elektra with some prior experience with martial arts, and while still finding the work challenging, she found it helpful to have the background she did when it came to the scale of fights and the tight turnarounds to learn the choreography. “I’m lucky because when I was younger, I’d done a lot of martial arts. I’m a black belt in karate, but I felt very rusty, to be honest, because I haven’t practiced for a long time, and everything goes so fast on this show.” Yung had the opportunity to try various styles of fighting that she’d had less experience with as well. “Phil Silvera and his team are really, really amazing. I did some Muay Thai so that helps as well, because what they tried to do with Elektra is to mix different type of martial arts, so we have a bit of Capoeira, we have some Tai Kwon Do, we have some Indonesian martial arts. It’s very complex, but they try to mix it up so it’s fun.”

Silvera and the stunt team relished working with an actor with a background such as Elodie’s. “Having an actor with a background in martial arts is a great thing and she brought a great sense of movement to the character. We would have a concept developed and then Elodie’s movement would come out naturally and would fit the character perfectly. I think she’s really going to surprise the fans with what she does this season and how true she is to the character which is great.”

Charlie Cox acknowledges that the success of the fight sequences in the show come down to the way the fights are seamlessly blended into the storytelling, “Every punch and every kick really should be like delivering a line of dialogue. It has to have an intention behind it.”