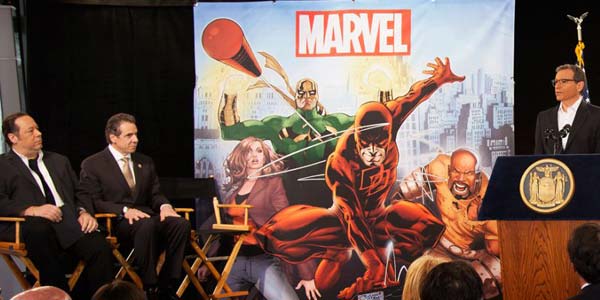 Further proof Marvel Studios GETS IT.

New York City is a very important place in the Marvel Universe, the home of everyone from Spider-Man and Daredevil, and its existence in the world of super heroes makes everything seem just a bit more grounded than DC’s fictional cities.  NYC itself has practically been a supporting character for many of Marvel’s best heroes, so it’s great to see Marvel Studios understands the importance of the city to their characters… enough to set up production for their upcoming Netflix series right in NYC!

I think this is an awesome decision, and not just as an East Coast guy.  It feels like a strong homage to the city itself that the Marvel team would rather film here than replicate New York’s streets on a set elsewhere.  It sounds logical, but things like this rarely happen when it comes to major movie and TV production.

The announcement describes the four series– that’s Daredevil, Jessica Jones, Luke Cage and Iron-Fist– as the “flawed heroes of Hell’s Kitchen” so I’d expect production to dirty up that area of Manhattan a bit if they want to channel the same vibe as Marvel’s Hell’s Kitchen.

That’s not all the Marvel Netflix news!  We also get confirmation that the four series will roll out one at a time, starting with Daredevil in 2015 and rolling out, to be capped off by the Defenders miniseries.  This makes sense, as Marvel does such a great job with building a story, 52 binge watched episodes feels like it would cramp any organic flow to the formation of this new team of heroes.

With all the pieces falling into place, I’d bet we will start hearing some casting news on these projects in the near future!