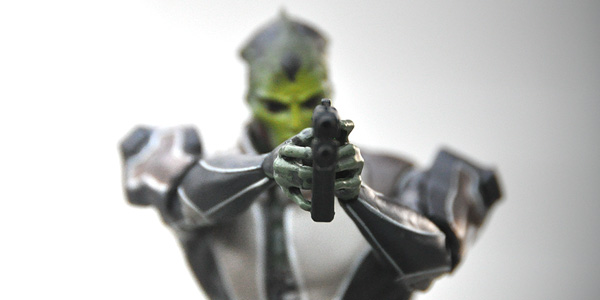 Distributed by DC Direct and originally slated for a Summer 2010 release, the first series of Mass Effect action figures suffered one delay after another with a small assortment sneaking onto shelves in April 2011 before disappearing completely.  Frustrated with DC’s handling of the line, Bioware pulled the plug on their partnership and later announced they would be working with Big Fish Toys to revive the initial run of four figures as well as a second series.  This week, all eight 6.8” action figures from Bioware & Big Fish Toys are beginning to ship to customers who had pre-ordered and, in keeping with the Mass Effect 3 namesake, are a colossal disappointment.

For starters, I’m not certain why they made the decision to use packaging with the ME3 logo emblazoned across the top.  Sure, all the characters appeared in the third game (some very briefly) but it’s pretty obvious that these figures were all modeled after their ME2 counterparts even if you didn’t know their production history – Garrus’s armor is modeled to be heavily damaged on his right side as it was after he ate a missile in the second game.  But I don’t want to be that nitpicky up front; the figures themselves do draw a strong parallel to Mass Effect 3 — they can look great on the surface but are designed in a completely illogical fashion.  So let’s run down the roster (click the thumbnails for larger versions): 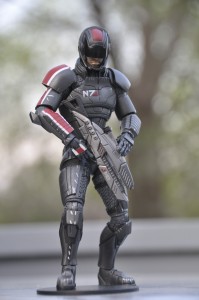 Commander Shepard – They chose the male canon face for Shepard but, if you’re like me, you will immediately put his helmet on and leave it there – not just because it’s easier to imagine it as “your character” when the face is obstructed, but because the face model looks atrocious.  Fortunately, Shep’s N7 Armor is fantastically detailed and makes the figure, overall, one of the best looking of the bunch.  My previous complaint on the DC Direct sculpt has sadly not been addressed (in fact none of the original figures appear to have been altered to address these concerns) and posing the figure to cradle his M8 Avenger rifle with two hands is impossible.  The ball joints in his shoulders would actually supply a decent range of motion if they weren’t impaired by the large shoulder pads connected to the torso that partially wrap around the joint.  What your left with is an extremely limited amount of motion from the arms, which is a shame as he’s one of the only characters that actually has a solid grip on his weapon (well, once you forcibly thread his index finger through the trigger guard anyway).  I did really like how his torso joint, while not incredibly useful, is masked by the makeup of the armor plating.  Shepard also easily has the most well-articulated legs of the series with ball-joint ankles and knees that bend and swivel.  Out of all eight toys, he was the only one that can be posed in a more dynamic fashion thanks to these added articulation points. 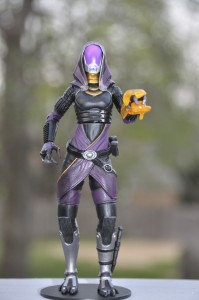 Tali’Zorah Vas Normandy – Conversely, Tali is a complete and utter mess.  I can’t think of one redeeming quality on this figure outside of its immediate aesthetic appeal.  The paint work looks good, the detail in her enviro-suit is fantastic, and I love that she is packaged with an Omni-tool.  She’s also packaged with an enormous shotgun that, while sweet-looking in and of itself, looks completely ridiculous in her small hands…but that’s a moot point as her hands aren’t really designed in a way that they can hold onto it anyway.  The problem is the figure itself has a very odd sculpt that gives the illusion that her spine suddenly curves to the left and her stance looks extremely unnatural.  Compounding this issue, the swivel joints in her legs are completely useless without any kind of ankle or thigh movement and, thanks to the soft rubber hood that is connected to the upper torso, head movement is virtually non-existent.  All the figure can really do is stand upright looking awkward.  You can’t even pose her in a way where she is accessing her Omni-tool because her arms have no swivel joints – very disappointing. 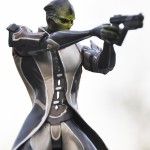 Thane Krios – Thane is another figure that made my heart sink when I actually got him out of the package.  The Drell assassin looks fantastic until you realize that he can only hold one pose.  Where Shepard and Tali can’t aim down the sights of their weapons, Thane was sculpted with that pose specifically in mind.  His shoulders are permanently hunched forward so posing him with his arms at his sides or really in any position other than outstretched directly straight ahead of him looks horrible.  His M4 Shuriken pistol is modeled well and I dig the flexible painted rubber jacket, but the weird sculpt coupled with the complete lack of any usable articulation in his lower half makes Thane an unfortunately poor figure overall. 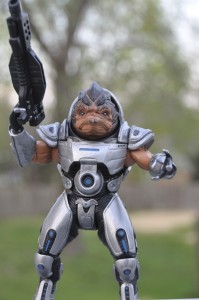 Grunt – Urdnot Wrex would have made for a far superior figure, especially since the packing says “Mass Effect 3” but Grunt (everyone’s 2nd favorite Krogan) is still a great toy.  He’s one of the only figures who can stand easily on his own without the use of the included base (thanks to his large frame and wide stance) and one of the only figures that can get away with being less agile, contextually speaking.  That said, the joints they did give the figure make little to no sense.  The ankle joint that swivels in a circular motion doesn’t open up any additional posability, it just gives you the option to make his feet face backwards.  The knee joints also extend too far in the wrong direction with very little movement in the direction they should bend.  Sadly, like most of the other figures, Grunt can in no way hold his M300 Claymore shotgun with both hands although he does have ball-joint wrists that offer a little extra expressiveness.  I also would have liked to see the designers put his neck joint further down into the armor so Grunt’s head can actually move naturally – instead, it only swivels making him cock his head like a confused dog. 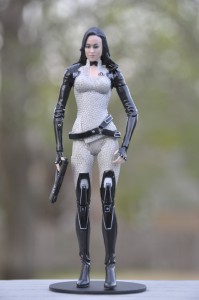 Miranda Lawson – Adorned in her signature hexagon-patterned white suit and flexible rubber belts, Miranda has one of the more simplistic builds.  She also sports a Cerberus logo for some reason even though, again, these are being marketed in ME3 packaging and Miranda is most definitely fighting against Cerberus at this point.  Her slender frame and thin limbs would have made it easy to work in some awesome articulation but, unfortunately, there is little to speak of – and even less that’s usable.  Her hip joints only move forward but not back and not out to the sides.  This is ideal if you want to make her sit down I suppose but good for little else.  Furthermore, since her legs and feet are so close together, she is prone to tipping over.  Even while connected to the base, the Miranda figure on display at Toy Fair 2012 toppled over within minutes of the first day’s opening and stayed that way for the duration of the event.  On top of that, her head cannot be moved to the right whatsoever due to hair that is molded on both sides of her shoulder. 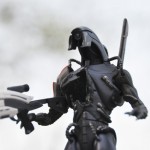 Legion – Visually, this is my favorite of the bunch by far – Legion looks absolutely amazing up close.  The arm detail is perfect and the damaged, open chest cavity is pretty stunning.  I love the paint detail on the exposed innards and the stripe down his right arm from his procured N7 Armor.  Sadly, the same problem common to the line is still prevalent here in that the figure has extremely limited and poor leg movement.  Although they gave Legion an additional forearm swivel, he still can’t cradle a rifle.  In fact, it’s extremely difficult to keep the gun in his hand at all – I had to position his arm so that the rifle stock was tucked firmly into his underarm just to keep it from falling out. 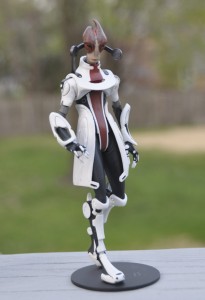 Mordin Solus – By now, you should see a common theme regarding the build of these figures and Mordin is no exception.  He looks great in press shots and in the package, but you have to physically handle it to see how poorly designed he is.  They did an amazing job with his slightly disfigured Salarian head and lab-coat like armor and some decent detail is present on his face to recreate all the many lines and wrinkles but, ultimately, I’m not paying for a cheap statue – I’m paying for an action figure.  Even though (I assume) collectors no longer physically play with these figures like they did as children, there’s still something special about the interactive quality of an action figure.  Mordin, like most of the line, with his feet permanently situated right next to each other and a complete inability to hold the accessory he was packaged with, just lacks that lifelike interactivity that makes for great toys. 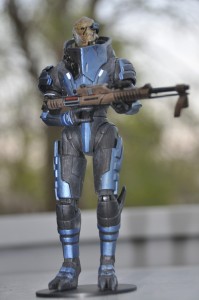 Garrus Vakarian – And we finally come to fan-favorite, Garrus.  I was initially really excited to have an action figure representation of Garrus in my collection when I pre-ordered these many months ago, but that anticipation only made the crushing mediocrity of this figure that much more devastating.  Truthfully, this figure probably wouldn’t have disappointed me quite as much if I hadn’t seen the mind-blowingly awesome version Square Enix/Play Arts is cooking up (check him out in our Toy Fair coverage here).  But alas, until I can get my hands on one of those, here’s a run down of Big Fish’s figure: he stands straight as a board, has no ankle articulation and his legs can’t be swiveled or move any direction but forward/backward – and his arms don’t fare much better.  All in all, he’s not a bad looking figure – his armor looks game-accurate and, if his gun is held at waist level, he can actually grip the bottom of it with his other hand.  I would imagine the designers pulled several all-nighters to achieve the logistics necessary for that small breakthrough.  I would have like to see more detail in the face that actually shows off Garrus’s scars.  His facial structure looks rather flat and clean compared to the intricate detail present in the games but apparently a little splash of pink paint is supposed to represent the horrific facial injury in question. 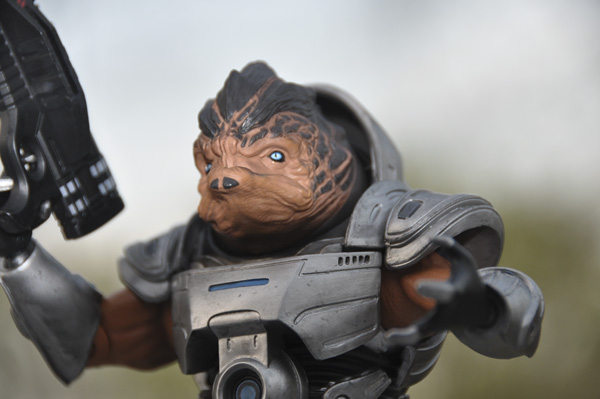 So there you have it.  It’s hard to totally trash these figures as I’m sure that a lot of work went into both their production and troubled release and, honestly, most of them do look really cool, but fail completely on a technical level.  Poor design decisions yielded eight figures that are just no fun to handle and a frustrating experience to try to pose.  With Square Enix’s Mass Effect series getting closer to seeing production, anyone interested in adding ME figures to their collection should simply wait for their far superior versions.  Basically, the money you would have spent on eight mediocre figures will net you all three of the incredible pieces from Square Enix/Play Arts (male Shepard, Ashley, & Garrus).  Trust, you’ll be glad you went with quality over quantity.

Check out a few additional shots of the gang: 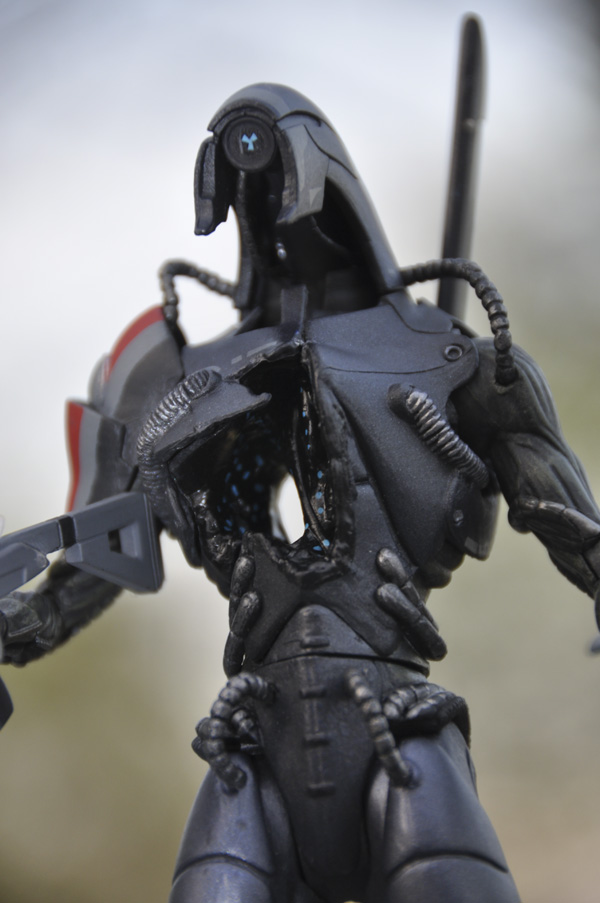 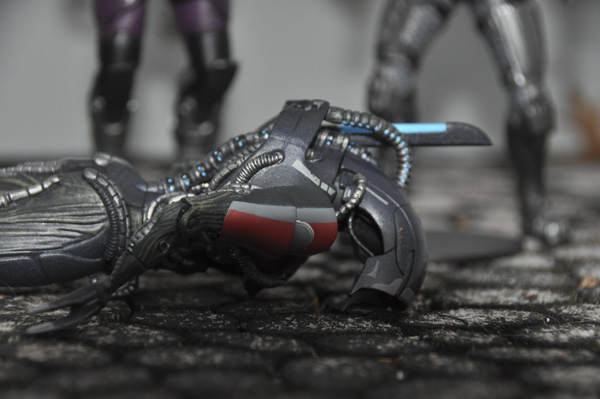 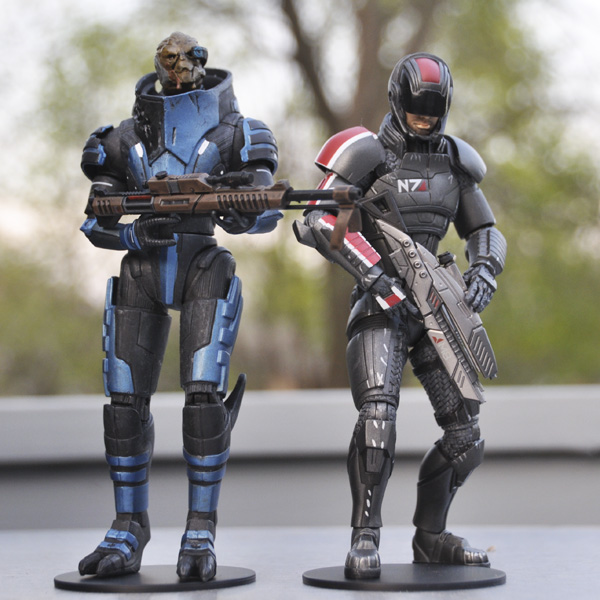 Another shot of Shep and Garrus 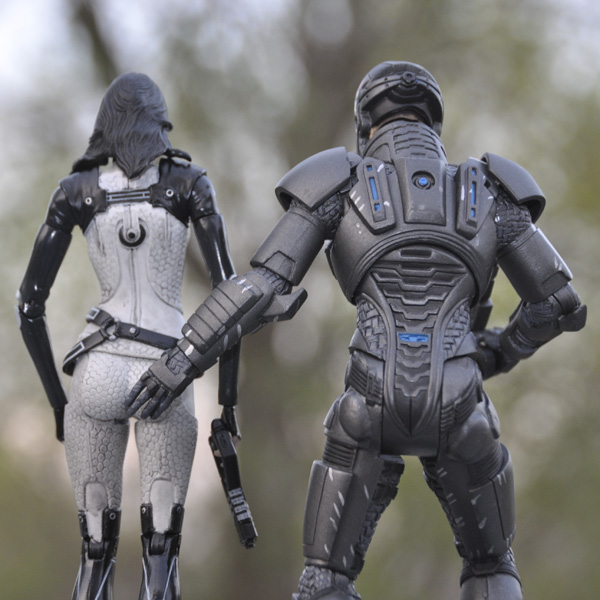 Sorry, it’s one of the few things the Shepard figure can actually do with his arm.