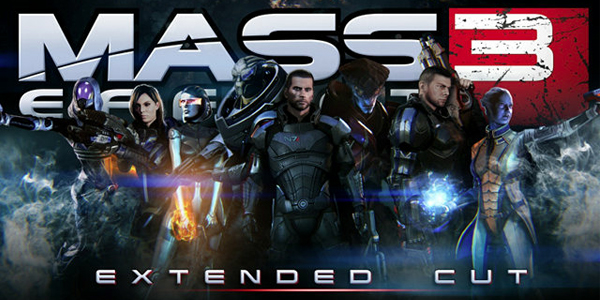 By all rights, Mass Effect 3 should have been the gaming experience of a lifetime – the culmination of hundreds of hours spent, not only playing a game, but absorbing a world rich in established lore and complex characters.  Instead, gamers were subjected to a jarringly disappointing end to the trilogy rife with plot holes, self-contradictions, and lazy writing.  Fan outcry regarding the abysmal finale sequence specifically caused developer BioWare to announce that an extended cut of the game was in the works that would provide more closure and attempt to explain away some of the gaping plot holes.  Now that it’s out, let’s take a detailed look.

First off, the immediate question you probably have is, “Is it any better?”  The most honest answer I can give is “Yes, much in the way that getting punched in the stomach is better than getting kicked in the teeth.”  Without scrapping the ending entirely, there were only so many things they could address – which means the inane, circular logic on which the narrative was built on is still intact.  Since it bears repeating, the origin of the Reapers, the genocidal synthetic race that Commander Shepard and crew have risked everything to destroy – the origin which has only up to this point been referred to as “beyond our comprehension” is as follows:

A mysterious artificial intelligence, which takes the visible form of a child that Shepard sees earlier in the game (for some reason), created the Reapers to destroy and harvest the most advanced organic races in the galaxy once they’ve reached their technological peak.  It goes on to say the advanced species are always doomed to produce synthetic creations that will turn on them and kill their creators, so it created an armada of synthetic monsters to wipe out the organics before those organics could create synthetics that would wipe them out…  right.

So here’s the thing, BioWare plainly said that they would not be changing anything about this ending because they wanted to preserve the artistic integrity of their story and instead would focus on providing some additional answers to fans questions.  Well, after seeing the extended cut, apparently they’re fine with sacrificing “integrity” and changing the ending as long as they don’t have to put any real work into it. See, instead of answering questions like, “If the mass relays exploded, wouldn’t every galactic army be stuck in the Sol System?” or “If the mass relays exploded, wouldn’t the ensuing supernova destroy every life form and planet in the galaxy?” or “If the mass relays were exploding, how and why was the Normandy in the process of jumping through one?” – they simply cut out any mention of the mass relays exploding as well as the scenes that show them exploding.  Now, Admiral Hackett simply chimes in and says that the relays were damaged but repairable.

It would seem then that BioWare wasn’t able to explain their way out of the stupidity of the original chain of events and just took that part out completely.  Unfortunately, the additional scenes that were added were equally uninspired.  The first notable addition was a touching farewell to your love interest (or at least whatever crew members were on the ground with you during the final assault) haphazardly inserted into the game just before Shepard is blasted by a Reaper beam.  This was basically added to explain how your crew went from being on Earth with you to in orbit aboard the Normandy in the following scene and just shows your squadmates being severly injured (seemingly suffering only scrapes and bruises as they jumped out of the way of a tumbling vehicle) and requiring a medical evac.  The Normandy zips down to Earth and picks them up while Shepard says a tearful goodbye all while a Reaper the size of a skyscraper annihilates everything in the area that’s not them. 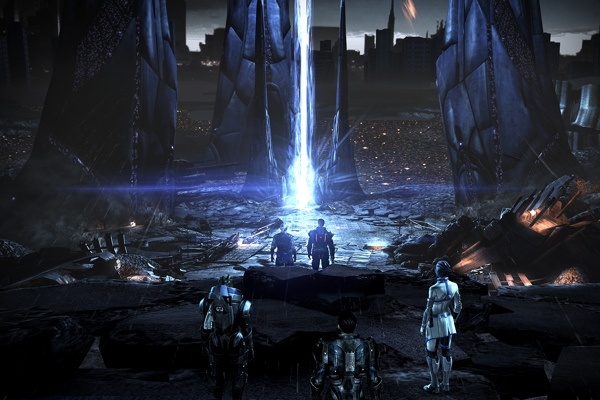 Then things play out in much the same fashion up until the chat you have with the ridiculous Reaper AI (a brand new character introduced in the last few minutes of the game, mind you) when you will notice a few new dialogue options.  Previously, Shepard just listened to all its nonsensical drivel without being able say a word about it.  Bioware has now added a few new options in which you can ask for more details (which barely elaborates on the choices you’re presented with) or say that you don’t agree with what you’re told (which is largely inconsequential).  As stated earlier, all mention of the destruction of the mass relays was omitted.

Aside from an additional phoned-in option (more on this in a bit), the ending choices remain the same: choose to control the Reapers (by grabbing onto a couple blue handles), synthesize a new form of DNA by combining all organic and synthetic life somehow (after hurling yourself into a green beam of light), or destroy the Reapers and ALL synthetic life in the universe by shooting at a red panel.  If you think it sounds silly, it’s because it is.  It’s a giant mess.  Originally, all the endings, regardless of which one you chose, all resulted in largely identical scenes of the Reapers leaving/dying on Earth and the Normandy crash-landing on an alien planet.  So what’s new?  Well, sadly, not much. 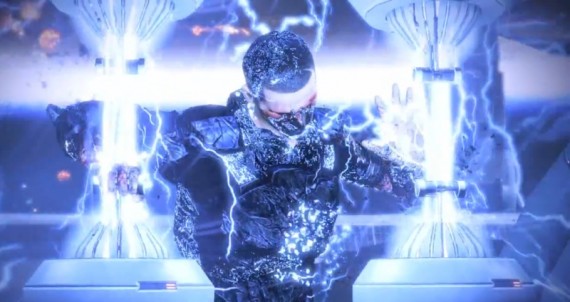 The control ending features a voice-over from Shepard, who has now ascended to some kind of god-like status and watches over and protects the universe, and the synthesis ending now shows you the physical effect your brash decision made on the world’s inhabitants…meaning everyone has glowing green eyes now. Both endings also greet you to a tepid slideshow of static images showing that all the alien species are carrying on with their lives on their respective planets (to drive the point home that they were not stranded hopelessly on Earth).  The scene of Joker flying away from the mass relay blasts in the Normandy has been subtly altered in all endings — instead of flying in a panicked fashion, hitting every button in sight, and looking over his shoulder like he’s driving a hatchback or something (he’s in a goddamn spacecraft. What is he looking at?), he is now calm and solemn as another crew member now convinces him to leave Shepard behind on the Citadel after Hackett makes the announcement to flee the area.  This is followed by the same crash-land sequence (only now the Normandy is shown to still be mobile and is not stranded there) and a new scene of your crew hanging Shepard’s name on the memorial wall.

The “destroy” ending continues to be the ending I prefer and still the only one that makes the slightest bit of sense.  After all, “Synthesis” is what the Reaper-controlled Saren wanted in the first game and “Control” is what the Reaper-controlled Illusive Man wanted in the last entry — and Shepard overcame and killed them both.  Choosing those options just makes your adventures from the previous titles a moot point.  Unfortunately, choosing the “destroy” ending also still wipes out EDI and Legion (the synthetics that were apparently destined to destroy their creators despite risking their lives countless times to help organics fight off the Reaper menace).  Clearly they were just saving everyone so they could kill them later.  Once you initiate this ending, you’ll see a couple things have changed from the other two.  As before, the Reapers don’t flee Earth, they keel over and drop dead shaking the ground as they topple over.  Hackett provides narration of the way we overcame the Reaper menace while the cheesy slideshow plays but, when the scene  plays in which your crew member posts Shep’s name to the memorial wall, they hesitate and smile.  This is juxtaposed with the one controversial scene from the original ending, which is only obtained by a nearly perfect playthough in which your military strength is at its highest, where the camera cuts back to the wreckage on Earth and shows a chest wearing N7 armor rise and fall.  Since this presumably means Shepard isn’t dead, did the crew just leave him buried alive?  It certainly isn’t going to quell the “indoctrination theory” proponents who claim that nothing in the end sequence was real and was, in reality, a mental struggle Shepard was facing to resist Reaper indoctrination. 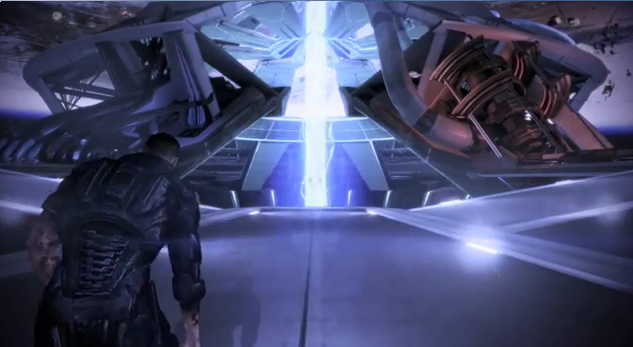 Only adding fuel to that theory the all-new ending sequence I spoke of earlier.  This ending can be obtained by choosing to reject all the choices the AI presents you with or, and this is the way I found out, turn around and shoot it in the face.  Suddenly, the child-like voice of the AI booms out in a very distinctive, deep, Reaper-like tone, “So be it!”  And leaves Shepard to witness the end as Reapers destroy everyone.  This then cuts directly to the planet that, in other endings, the Normandy is shown to have landed on where, underground, Liara has hidden her account of Shepard’s story which is referenced earlier in the game.  It’s introduction advises that they were unable to stop the Reaper threat but offers all their data and knowledge to the next cycle in hopes that, fifty-thousand years from then, they can finish what Shepard was unable to.  This is actually a welcome addition to the game but it’s a real shame that such little effort was put into it.

Overall, the extended cut does marginally improve the experience by at least removing one plot hole and offering additional voice work and images advising you that the other species of the galaxy can rebuild and re-populate.  Really though, it’s too little, too late — a small bandage on a gaping wound.  The new material in no way makes up for the facepalm-inducing writing that’s still present throughout and I just can’t see any long-term fan of the series being the least bit satisfied with this offering.  It remains a crushingly disappointing and incredibly silly finale to what could have easily gone down as one of the greatest sci-fi epics in history.