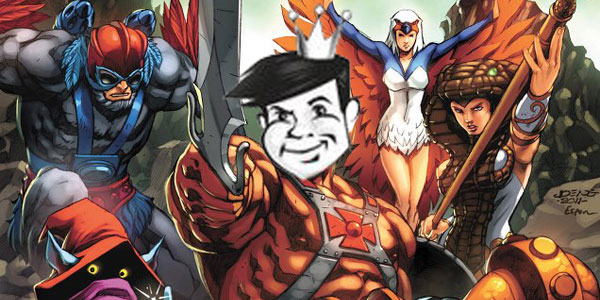 Mattel is back with a new round of questions. This time out, Matty gives insight on why Man Of Steel’s General Zod isn’t all geared up, what’s going on with flying beast flight stands and more– get all the answers here!

Kastor’s Korner: Man of Steel promo images have seen General Zod in sophisticated armor, similar to the other Kryptonians, but his Movie Master figure appears to be wearing a much more basic black costume. In light of this, and the DKR Bane Movie Masters avoiding his most iconic look (vest, no sleeves) for two more scene specific ones (winter coat and shirtless), what inspired figure design for characters with multiple costumes in a movie?

Mattel: There is quite a lot of thought and exploration that goes into determining which costume look we will bring to life in our Movie Masters figure line.  Ask us again in June when we can tell you more about the movie!

Kastor’s Korner: Are the flight stands for Swift Wind and the Griffin still being considered? It’s kind of silly to have only flared wings and no way to display them flying.

Mattel: Something we would love to do, but no plans yet to announce.

Kastor’s Korner: Have you considered a “version 2” or re-boot sub for “desired” Masters updates, (like She-Ra/Bubble Power She-Ra), starting with He-Man: changes that makes him improved while also mixing in with the version 1 toys (or characters that may not necessarily need or warrant a “version 2”)? I crave a new He-Man and Skeletor with rocker ankles, Filmation heads, repainted or new weapons, new wrists (NA He-Man) and updated hip (Elite WWE) articulation, as well as injection molded elbow and knee joints to match the newer ankle joints you started. Mix popular or expensive A-Listers like He-Man, Teela, Sorceress, Skeletor, and Beast Man with characters winding down their factions (PoP Perfuma or NA Staghorn, for example), or maybe test the waters with a mini-sub like Club Filmation. While there is fear in losing SKUs for new characters, there is merit in making much-demanded improvements on former characters, like the ones stated above.

Mattel: Right now we are putting all of our efforts into getting out as many original characters as we can. Allocating a design slot and resources to a 2.0 will take away a slot from an all new characters. Finishing the vintage lines and the A list animated characters is the priority right now.

Kastor’s Korner: Your WWE figures 2013 #11 Eve Torres and WWE Elite wave 20 Cody Rhodes are 2 examples of fantastic Mattel WWE figures I would consider as an adult collector “High Quality” and they use  “white white” on their outfits, jackets, and kneepads and look sophisticated and cleaner than the Mattycollector figures I pose them with (Netossa, DCUC Hawk & Dove most recently). Can PMS Cool Gray 2C and any lighter shade of non-white please be discontinued on MOTUC in favor of straight-up white like the WWE figures, which also matches the Four Horsemen Paint Master? Please Please pass this along to Bill in Design.

Mattel: We would be happy to pass this comment along to the design team.

Kastor’s Korner: Dark Knight Returns is fantastic, and has already proven to really strike a chord with collectors.  Based on this success, is there a chance we may see more Frank Miller DKR figures somewhere in the DC Universe series? A blue and grey Batman with yellow chest symbol seems like a no-brainer, and even a similarly style MOTU Superman would only require limited new tooling…

Mattel: We are so glad that you like the Dark Knight Returns Batman!  He is one of our favorites in the line.  There is always a chance for more Frank Miller figures.