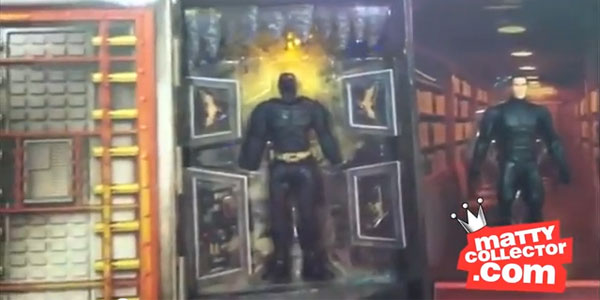 Once again, Mattel is offering pre-orders for their 2012 Comic Con exclusive toys on MattyCollector.com.  Attendees of SDCC can place their orders now on the site and pick up their items in person at the show.  Over the holiday weekend, the toy company also revealed their Dark Knight Rises exclusive in an… interesting video featuring Marketing Manager Scott “Toy Guru” Neitlich and one heck of a cameo on his desk in the background.

The Dark Knight Rises SDCC exclusive is a Bruce Wayne figure packed in a gatefold box that looks like the study in Wayne Manor… the box unfolds to reveal the Batcave, complete with a rubber bat-suit which the figure can wear.  Like all of Mattel’s Con exclusives the packaging here is really top notch, and this set, like many of their other exclusives, falls squarely into the “that’s cool, but I can live without it” bucket. Good thing, too– the set has already sold out!

What’s more interesting about Neitlich’s video is the incredibly obvious Castle Greyskull box behind him… no doubt this deliberate product placement was meant to build some pre-Comic Con buzz, so I figured what the hey, we’ll toss out hat in the ring, fan those flames, and ask it– are we getting a castle?!?!

While the Bruce-to-Batman may be sold out, there’s still lots of other Mattel SDCC  exclusives ready for pre-order now, including MOTU’s Vykron, the Vertigo Death statue and more– if you’re heading out to San Diego this July, Click Here and place you pre-order now.