Mattel Confirms They Plan To Complete The Vintage MOTU Collection 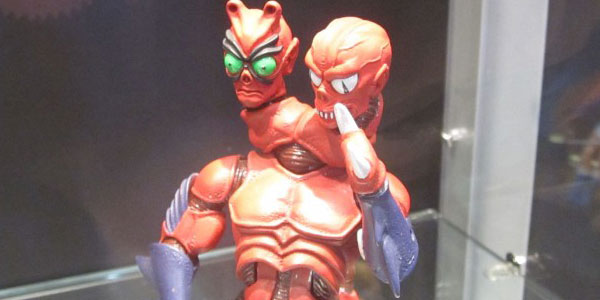 The latest post from Mattel’s Toy Guru confirms that a completed vintage Masters lineup is their endgame.

I guess it isn’t really news, since it’s long been assumed/ promised that Mattel’s Masters of the Universe Classics was planning to complete the figures yet to get modern updates of their vintage, 80s selves, but Scott Neitlich has now confirmed that IS still the plan between 2014 and 2015… provided they get the subscription numbers they need.

So basic logic and past promises have already echoed these same promises, but this is the first time I’ve ever seen Mattel call out un-announced characters and specific plans to round out sub-teams (Neitlich mentions one Snake Man for 2014 and the last guy for ’15).  This is exactly the sort of honesty and straightforward communication collectors have been wishing for for years now, and I’m super glad to see Mattel finally following through.

This is the sort of attitude I like to see from toymakers, an open, honest approach that lays things clearly out on the table and lets us make our decisions accordingly.  And it makes for the kind of toymakers I like to give my business to.

Here’s the whole post from Toy Guru… Preorders for the 2014 subscriptions are still open at this link.

As people are gearing up to subscribe for 2014, I wanted to make sure and clarify any outstanding issues or questions. One that I see popping up on the boards is the recent supply of MOTUC figures at some discount chains like Big Lots. I’ve seen some fans have concerns about why they should subscribe when “they can just wait it out and see more MOTUC at discount”.

The direct answer is; you won’t.

As announced back in Dec 2012, product that went unsold on Cyber Monday 2012 (all 2011 and earlier) would be going to discount channels to clear out the way for 2013 and 2014 as well as help promote the line. All of the figures offered this way were first offered on discount on Mattycollector.com through Cyber Monday. All of this product is from the “second run” of a handful of older 2009-2011 stock. Back then, we used to run second runs and add a burst noting “the Original” on package (in line with what the vintage line did when He-Man was reissued so Moms wouldn’t confuse him with newer He-Man variants like Battle Armor etc…). But I digress.

The point is, the second runs of figures did not perform as well for us. We sold them on discount first on Matty, and after this, the small remaining stock was moved to discount retailers 6 months ago (as announced in Dec.) and is just now showing up. Newer figures from 2012 and 2013 are not going into a second run and are selling through completely. As you may have noticed, each month in 2013 we have been selling through the very small remaining customer service stock of some 2012 figures. So for example when we sold 2012 Stinkor a month or two ago (starting in Early Access) that was it. There are no more. So there are no 2012-2013 figures (and beyond) that will show up at discount because there is no more stock.

It was a one time thing to move through older 2009-2011 second run figures that had first been offered at discount on Matty on Cyber Monday 2012.

I hope that clears things up. So if you are not subbing in the hope that if you wait long enough MOTUC figures will show up at discount, know that that isn’t going to happen. All 2012 and 2013 figures only have one run and are selling through in full. There isn’t any stock to sell at discount. Starting in Jan 2012, it has been a onetime shot (with very limited CS stock sold off during EA the following year)

I hope this help nullify this issue and encourage everyone to sub up this year for both DC and MOTU. The line has very much become subscriber dependent. The next two years will be only the remaining vintage MOTU, POP, A list NA, mini comic and animated figures. No concept or box art or background characters. And if you note who is still unmade in the vintage line, (i.e. Extendar, Mermista, Flogg, Dragstor, Gwildor, Ninjor, Sweet Bee, etc…) a lot of them have a ton of new parts. So the next two years really are going to be some of the best figures we have ever done. You are getting a lot more bang for your buck in 2014 and 2015 (compared to say 2009 when a new fig like Tri-Klops or Zodac was a head and armor only). The value will be huge every month. Compare Mantenna and a Horde Trooper to Scareglow and Prince Adam. Upcoming figures are much more like Mantenna in terms of new parts and value!

Finally, for those who are still unclear at who is left and who you will be getting, consider the unmade vintage figs in a little more detail. There are two snake men left. Squeeeze and Tung Lasher. One will be in 2014, one in 2015. Get it? And whomever you don’t get in 2014 will be in 2015 (assuming enough sub holders both years). All of the remaining vintage figs have been split over two years (assuming we get enough sub holders each year). So by the end of 2015, the goal is to wrap up our collections (with of course the potential for some con items or other ways to always do figures beyond that should there be customer support).

Okay, that is my soapbox. Hope it helps! Head on over today to Mattycollector.com because the sub period is only through Aug 19th for DC, MOTU and the incredible Ecto 1!