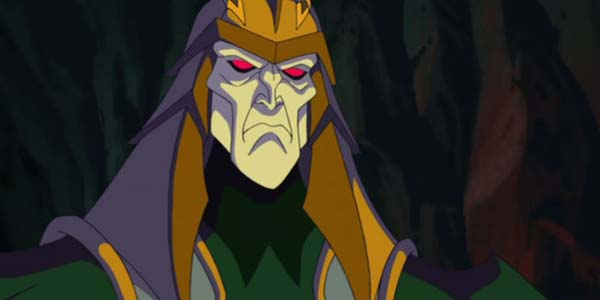 The 200x Masters of the Universe villain will be re-released later this year, complete with his alternate snake body accessory.

Ever since the Snake Armor He-Man vs. King Hssss two-pack was announced, many of us have been hoping for the alternate form of the Snake Men’s leader, a slithering mass of snakes to take the place of his human form.  The piece was sculpted– we’ve seen it on display at Mattel’s recent showcases– but it’s never had a concrete release plan, until now.

And it’s a bittersweet one, to be honest.  The accessory didn’t cost out in the initial two-pack, and word had it would instead be packed with the upcoming Buzz Saw Hordak, which was a nice way to up the value of this relatively lame and not very interesting variant.  But that, too, simply didn’t cost out, so Mattel will instead re-release the 200x King Hssss, single carded, which will include the alternate snake body and other accessories.

I know you guys have been wondering about King Hssss and now that I have some concrete answers I can share what’s going on.

Yes, the new torso was scheduled to be released with Buzz Saw Hordak. However, when we tried to combine the two we found out that it wouldn’t be possible to do so due to costs. We tried a few different options (alternate packaging, higher price point, etc.), but none of these choices made sense (business or common).

So here’s what we’ve decided to do: King Hssss will still be released in 2015 but he will arrive as a complete figure. Accessories, alternate head, another set of legs…it will all be there. After reviewing all the different factors that went into making this product this was the only thing that made sense as well as the right thing to do. We know that promises were made regarding how you were supposed to receive this figure but ultimately…it just wasn’t possible. It didn’t sit well with any of us to force you to pay a premium for this item so we decided to put the power in your hands.

There will be pictures posted of the bendy headed Snake Men leader at a later date, but I didn’t want to wait any longer to give you a heads up.

So where does this leave us?  Like I said, it’s kind of bittersweet.  It’s disappointing to hear this accessory won’t be available in the Club Eternia subscription as the original figure was.  Losing this piece also devalues the Hordak variant by a bunch– I no longer have any interest in that figure now, whereas he was one of my top wants a week ago, simply for his pack-in King Hssss body.  Releasing Hssss separately also means purchasers will wind up with two of this figure in the collection, which I guess is good news for Junior and the other hardcore MOTU collectors who like to display their swappable parts as variants, but for me, it mostly just adds clutter, so I’ll likely skip out on the one-off purchase.

I stand by the fact that it’s a bittersweet announcement, though, because of the vastly improved communication from Mattel on exactly what is going on, and why.  While the news they’re delivering is disappointing, their reasoning is both candid and perfectly reasonable.  They’re not asking us to jump through any hoops to make it a reality, and they’re not shifting blame to their customer base for too soft sales of the line.  Most importantly, they’re speaking to us like the educated consumers we (or at least many of us) are.  I like that, a lot.  It’s a huge improvement over the way these guys used to communicate.

So the moral here is, if you’re in the toy business, it IS a business, and that means sometimes you have to go with Plan B, even if it’s less than ideal.  If that’s the case, though, just make sure your customer base knows about it, and knows why, and don’t talk down to us.  I think this less condescending approach will pay off in dividends for sales of the new King Hssss, personally, and if I wasn’t blowing out most of my toy collection in the coming months, I’d throw in for a purchase just to support Mattel’s new approach to fan relations.