Mattel’s DC All-Stars Should Go Back To The Minors 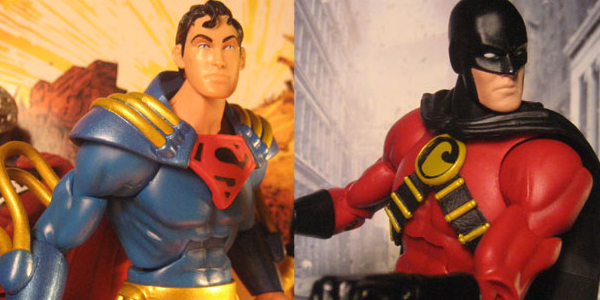 Back at Comic Con 2011, Mattel caused a major stir with their nonchalant announcement that the long-running and very ambitious DC Universe Classics were being cancelled, to be replaced by the Club Infinite Earths subscription for fans, and DC Universe All-Stars at mass retail. The plan for All-Stars was to focus on the heavy hitters, in the hopes to appeal to kids and moms as much if not more than collectors. 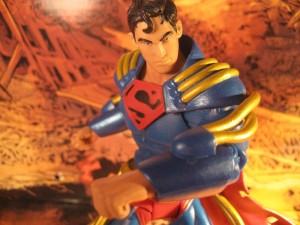 The announcement left a lot of collector fans angry, but as they typically do, harsh feelings fade over time, although the All-Stars’ troubles were far from over. After over a year of lineup changes, release delays and a scaling-back of efforts, it became clear All Stars was going to be a no-go (it was ultimately replaced by DC Unlimited and Batman Unlimited, both revealed at this year’s Comic Con for an early 2013 launch).

To their credit, Mattel did release what they had ready for what would have been the beginning of the All-Stars series, featuring New 52 versions of Superman and Batman, along with Red Robin and Superboy Prime. I took a pass on the New 52 figures, but decided to pick up the more classic side characters. 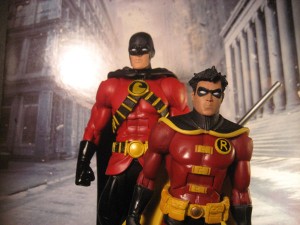 I’m not sure what it is about these figures, but there’s a level of apathy that just bleeds through both of them.  I know part of it is the rote reuse of the same basic bucks, which has been a debatable problem for the length of Mattel’s DC Universe collection. On the one hand, the shared bodies guarantee a sense of universality between the heroes and villains of the comic universe, but on the flipside, using so few bucks means the figures really start looking dull and unoriginal, and it gets harder to justify the $15+ price tag.  Beside the generic bodies, both figures feature new heads and some add-on parts such as Robin’s bandoliers and skirt and Superboy’s Anti-Monitor armor.  The new parts are decent for the most part– I like that they went the extra mile to give SBP his tattered cape, but there’s a softness and lack of quality control to these elements that makes them less impressive. 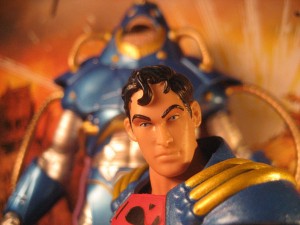 Superboy’s armor is accurate enough, but it’s nowhere near as sharp as the DC Direct version released years ago. DCD also wisely set up their armor to be partly removable, which would have benefited the Mattel version as his chest piece is glued in place way too high. Superboy’s portrait is kind of weird as well, with the flat face and big ears making him look more like a rat than a wannabe teen hero. It leaves him very different from any of the other Super-family figures, which is a plus, but again, the DCD version released years earlier had a drastically better look for the villain. 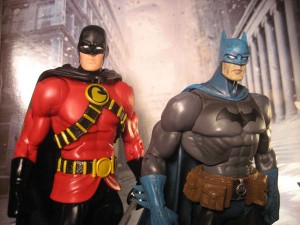 Red Robin fares a little better, but most of that comes from the coolness of the Alex Ross-designed costume. Tim Drake joins Nightwing as Batman’s way-too-tall adult sidekicks, as Red Robin is far too big and bulky, compared to his comic appearance. The figure really should have been on a leaner base body (which Mattel should have easy access to), and it’s silly to see the smallish Tim eye-to-eye with pretty much any Batman figure. The bandoliers and belt are nice added parts that break up the dullness of the body, but like Superboy, they are glued in place, and badly– my figure’s bandoliers and insignia are way off center, leaving one side drooping while the other is too tight. 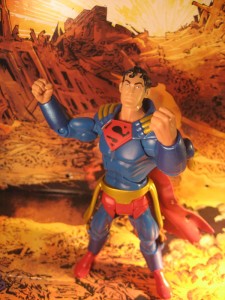 I think what’s frustrating about both of these figures is they’re characters that deserve to be in the DC toy collection, and the results here just feel kind of half-boiled. From the soft sculpting on the faces and overlays, to the reuse of the stock DC Universe packaging, it seems like Mattel made it about 75% of the way on these guys and threw their hands up saying “eh, close enough.”  And that indifference that clearly made its way into production feels contagious– fixing many of the QC issues on these guys wouldn’t be a difficult project, but so far I haven’t cared enough to do anything.  And at $17+ each, plus shipping, for figures with NO Collect N Connect pieces, I don’t feel anyone should have to do any extra work.

The good thing about Mattel’s abandonment of All-Stars is they have doubled down their focus on Infinite Earths and the new Unlimited lines, both of which are vastly superior to these remnants of the Classics era Mattel killed off too early. If these figures were released as a eulogy for the Classics line, they don’t do much to honor its memory. 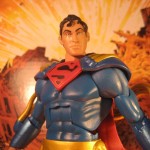 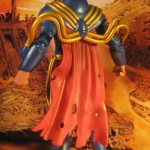 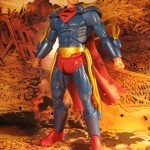 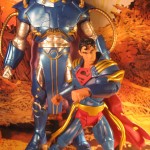 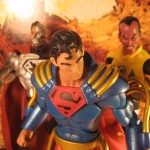 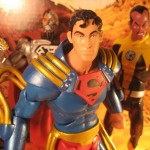 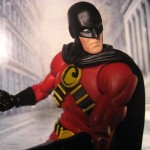 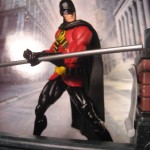 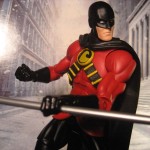 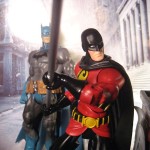 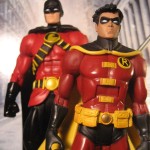 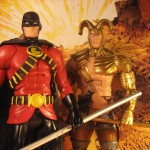