Mattel To Deliver the Doomsday We Deserve 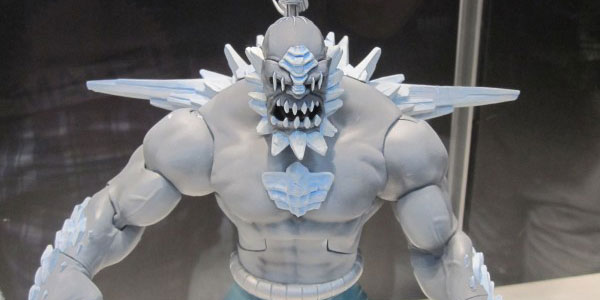 Also, coincidentally, the one we need right now.

Here’s what Matty Collector posted on their Facebook page:

Celebrating the official end of the Four Horsemen 6″ DC Universe line, Mattel is excited to partner with Warner Bros. and DC Comics to bring you the long-in-coming “Unleashed” Doomsday figure! He will be available this winter in an amazing window box diorama as a standalone day-of purchase! Images and full details to come, but we couldn’t wait to share this news with our fans! This final figure will celebrate the end of a fantastic toy line.

So here’s the thing– it’s safe to assume they were planning on keeping this reveal under wraps until the leaked images forced their hand right now.  Why were they waiting?  Who knows, but I would guess it has to do with finalizing the rights from Warner Bros and DC for the character.  Not that there was any doubt there would be an issue with approvals, but until the ink is signed to the paper to please the company’s legal types, Mattel was likely trying to maintain radio silence.

That’s what a lot of collectors don’t understand.  Yes, Scott Neitlich is an awkward and sometimes vindictive dude, someone who doesn’t really know how to communicate effectively with peers, press or fellow fans.  But he’s not the be-all, end-all problem with Mattel.  I work for another big, mega-corporation not unlike Mattel for my day job, and I can tell you it’s absurd how much our hands are tied until every last “T” is crossed and “I” is dotted.  So I get why Mattel behaves the way they do in this regard.  Their mandate from the higher ups was probably something to the effect of: No word of this announcement until we’re officially signed.  It doesn’t matter than Mattel has an umbrella contract with DC.  It doesn’t matter that this is a comic book figure, and hence has no bearing on Doomsday’s likely appearance in Batman vs Superman.  It’s just a by-the-book bit of corporate bureaucracy.

I’ve already seen a lot of negative comments aimed at this announcement, about how Mattel has lied to us, twice now– when they said this figure wasn’t coming out, and again when they claimed the leaked photo must have been an unproduced mock-up.  And yes, technically this is all factually correct.  But this sort of criticism seems counter-intuitive to me, especially in a news update that delivers the GOOD news that a figure thought cancelled is now, suddenly, very much not cancelled.

Yes, I get that Mattel is among the worst companies when it comes to legitimate fan outreach.  But part of the burden, ultimately, has to fall on us as well.  Put yourself in Toy Guru’s shoes– You just announced the Doomsday figure fans have been clamoring for over the past 13 months, said to be impossible to release, is now coming out in a few short months.  And the first response to the message calls you a liar.  This attitude doesn’t excuse Neitlich his bad behavior, but in my opinion it very much informs it.

I guess what I’m saying is, we’re stuck with Scott and he’s equally stuck with us.  He’s not going to change the way he talks, but occasionally he will speak through actions, and going back on his word that Unleashed Doomsday was never going to be a reality sends a strong message.

So I say we send an equally strong message.  It isn’t ass-kissing or sucking up to celebrate a win, and Unleashed Doomsday is a big win, for them and for us.  So it should be applauded as such.  It doesn’t matter what outdated news and disinformation we encountered along the road, because as of now, the path is clear and it leads to the thing we all wanted becoming a reality.

Of course, we should all strive to be critical in every aspect of life (including our hobbies), and YES, we should absolutely call Mattel out on their bullshit.  But what we, as a community can change is the blanket trolling of these guys.  Whether they have that treatment coming is based on your personal prerogative, but as long as they receive that attitude– especially in response to their GOOD news– we’re sending a mixed message about what it is we want, and they’re clearly not going to change in their opinion of us.  We can change that, and we can start now.  Instead of leaving a snarky comment on Matty Collector’s post, just “like” it, if you’re excited about the Doomsday news.  Post a positive comment to express that you’re glad we’re getting this figure, or trying to pester Scott for more details.  And if you don’t care, then don’t leave a comment at all.

I’m not saying things will ever change in the “Fans vs Mattel” war. But if they are willing to step up, eat crow and actually release an awesome action figure like Doomsday, then I don’t think it’s too crazy for us to celebrate that fact.