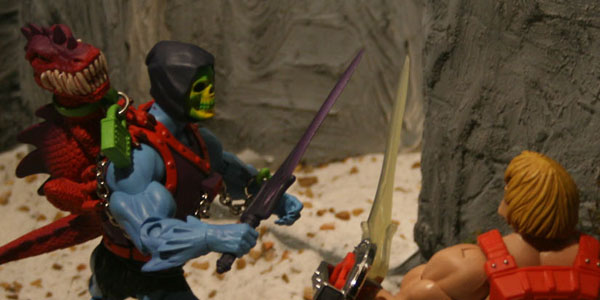 While the threat of paint scrapping off loomed over our collective heads, the Masters of the Universe September releases themselves came out fairly well, and while I do have to treat these guys with kid gloves, I can’t help but think they still look and pose amazingly. Mekaneck was outstanding, but Dragon Blaster Skeletor was no slouch, either.

Dragon Blaster Skeletor is the quarterly variant, and he is quite a colorful change. He comes with new battle armor, vintage toy-accurate forearms and boots, and a baby dragon to climb his back. As a nod to the old toy, everything is in place, from the green lock to the metal chain. There are some hot-button issues with the toy’s aesthetics, that I am sure the budget dictated. First, his head was given a new application of green and yellow paint. The paint appeared more airbrushed, with the teeth painted lime green after the other colors were added. this paint app left the teeth sloppily done on a lot of figures, as if Skeletor was eating Slimer. Fortunately, the DB Skeletor I ordered from Mattycollector came from a different batch than the group I received through my sub, and his face had no such issues with his teeth, and it looks FANTASTIC.

The dragon is attached through a thick port on Skeletor’s back, but given the size of the dragon and the long tail, Skeletor may do more hunching than you would like to keep him standing.  Sadly, the dragon is not articulated and the lock does not come off, so he couldn’t be made to stand alongside his evil master.  The creature’s head is WAY more toothy than the vintage dragon– improbably so… this is one dragon the Horsemen may have approached the wrong way creatively, but I think he looks cool nonetheless. The colors are spectacular, as like the DB armor, the dragon is adorned in red with a purple spine. As a singular unarticulated piece, I do think the dragon looks great. Oddly, there was no nod to the water-spraying action feature, to contrast He-Man’s energy punch. This again may be due to the budget, and I would rather they drop pieces than paint apps.

The included mini-comic finished the three-part story with a bang. Seeing the splash pages with all the characters that has yet to be made is something I can’t wait to re-create in my own collection diorama.

The September figures from Masters of the Universe are not only well-executed, but offer lots of options for fans of the series.  DB Skeletor is no exception, as one fan was able to cobble together a toy-accurate classic Skeletor using the Dragon Blaster parts successfully… and without paint scratching! This interchangeability is truly essential to keep fans buying extras and keeping the line alive, and interchangeability is the name of the game for the Snake Men two-pack, also released this month… Check back later today as we shine the spotlight on the unnamed minions of King Hssss! 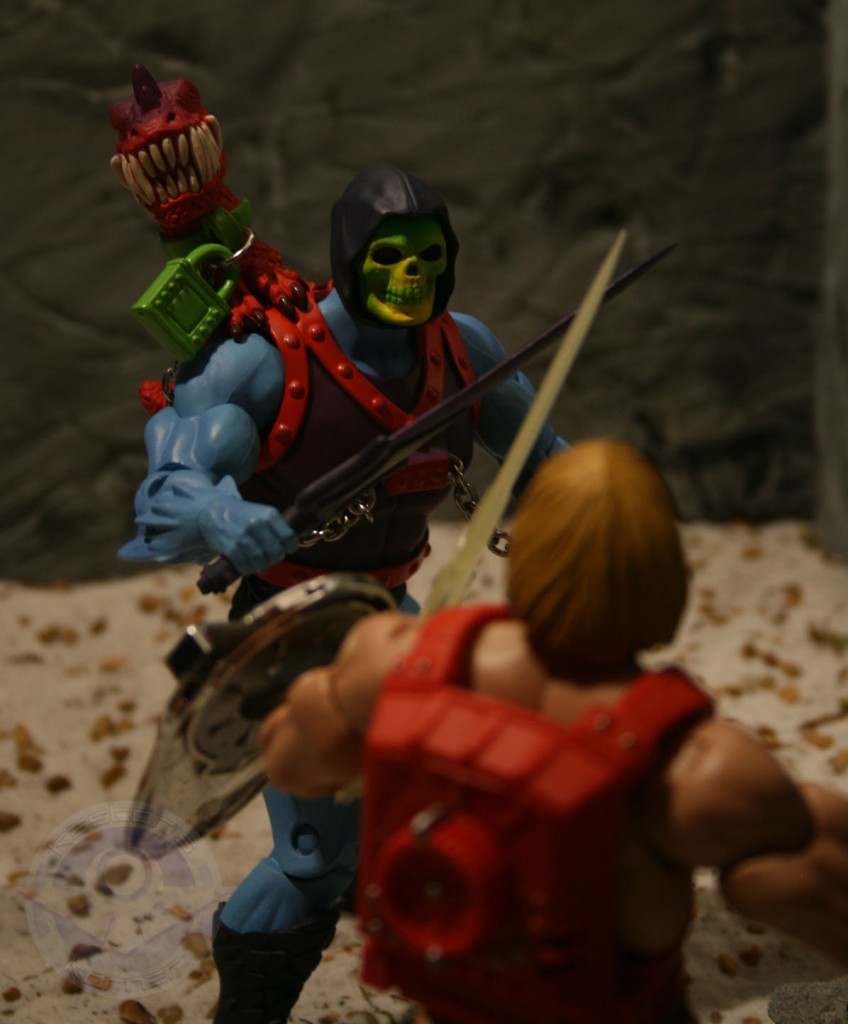