Mattel Draws a Line in the Sand for Collectors

Mattel gives and Mattel takes away. The company’s plans for 2012 seem to revolve around a clear and decisive split between their “collector” toys and “kid” toys, and the news coming from Matty’s camp late last week seems to prove they’re taking this plan seriously.

By the end of last week, Mattel had revealed two more additions to the Dark Knight Rises Movie Masters line, sure to get collectors excited– not only will we get a 6″ rendition of Joseph Gordon Levitt as GCPD Officer Blake, but we will finally see an Alfred! These two are great choices for the collector line, delivering one long-time fan desire with Bruce’s most trusted ally (featuring what looks to be a very good Michael Caine portrait), and Blake who can easily serve as the base for a whole squad of movie-style GCPD cops. With a roster of only six figures in the line, dedicating two of those spots to supposedly “non-kid friendly” civilian characters is pretty impressive, and adding these two to my collection will make it much easier to shell out for another movie style Batman and the unimpressive designs we’ve seen for Bane and Catwoman*… so it looks like I’m down for that Collect-N-Connect Batsignal after all! 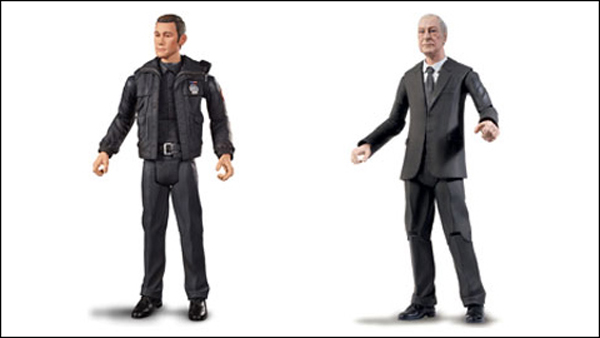 Without a doubt, one of the biggest, most highly anticipated films for summer 2012 is The Dark Knight Rises. We revealed the first three characters for our 2012 The Dark Knight Rises Movie Masters® series at New York Toy Fair in February, and the buzz has been amazing! Along with the great sculpts for Batman™, Bane and Catwoman, everyone is talking about the Collect-and-Connect® projecting Batsignal.

Hard-as-nails Officer Blake is a brand-new character to the Christopher Nolan trilogy, and we can’t wait to bring him to life in our Movie Masters® series. And you know we’re beyond stoked about Alfred! Fans (and us!) have been asking for him for years, and he’s a big addition to the line.

Of course, new figures as awesome as these deserve new packaging, too. Check out what’s in store for our 2012 Movie Masters® line…

Sweet, right? This packaging is so good, you’ll be wondering “Should I open it?”… “Should I keep it in package?”… “Should I buy two?”  Decisions, decisions!

That’s all for now, but check back soon because next up will be the sixth and final 2012 TDKR Movie Masters® figure!

Less than a day later, e-tailers around the web sent out word that Larfleeze, the Orange Lantern and most talked-about figure of the upcoming DC Universe All-Stars had been cancelled from the assortment. Indeed, wave one of DC All-Stars got a complete overhaul, cutting the non-Batman and Superman figures and focusing on the heroes in their New 52 looks, along with the previously announced Red Robin and Superboy Prime. Matty has stated all along that with the advent of Club Infinite Earths, the mass retail 6″ DC Universe line was being converted to a “kid” line, and it appears they were quite serious about this call. If even a New 52 Flash (also pulled from preorders for the time being) was deemed too obscure for the new retail line, I can’t imagine we’ll see many exciting mass market additions to the DC Universe anytime soon.

I guess it kind of makes sense to divide properties between kid=focused and collector focused, but this seems a bit excessive to me. Collectors, obviously, are very vocal and particular about what we want from our toys and our assortments– limited variants of the main characters and as wide an assortment of original characters as possible in most cases, but the part I don’t get is the kids angle… wouldn’t kids want that too? I know when I was a kid, I did– if my parents gave me the choice between a new Luke Skywalker or an all-new alien creature, I’d always take the new guy. Even if I didn’t know him, if he looked cool I’d want the toy. I was 12 by the time Batman: The Animated Series toy line hit, and by then I was openly hostile to the stupid, neon Bat-variants which seemed even then to clog shelves and prevent me from finding Scarecrow, Two-Face and all the other awesome villains on the back of the package. The major companies always cite market research that kids react better to stupid variants of the main hero than any side characters or villains, but to be honest I have never known one of these kids (as a child myself or as an adult), and the fact that those toys sit at retail for so much longer than original characters or accurate versions of a main hero are a telling sign for me, so I have to ask… who are these kids that want a red, vac-metal Batman or a snowboarding Spidey?

Mattel’s strategy should be a good thing for collectors’ lines, but it seems like it’s going to sell their mass retail stuff short. I know the adult collector market is a small fraction of a major toy company’s overall profits, but it seems odd to cut that potential profit out completely from mass retail. It’s a nice break on the wallet, and truth be told I’d rather just wait for my Matty Collector sub to renew and have the figures sent to my doorstep than have to watse tanks of gas chasing them at unfriendly, run-down Wal-Marts, so I can’t really complain. But from a business standpoint, focusing exclusively on a “one or the other” approach to kid and collector lines seems like it’s limiting their potential to make money.

What do you think? Is Mattel’s new strategy of keeping kids’ lines and collector lines mutually exclusive a good one? Or will you miss chasing after DC Universe toys at Wal-Mart and TRU? Sound off in the comments below.

*This is not Mattel’s fault at all– both figures are fine representations of the movie looks for the villains… but so far the DKR movie designs have seemed to be a victim of Nolan’s obsession with practicality in his superhero universe… leaving the characters looking pretty flat and quite frankly boring.