What Will Mattel Do With The New Ghostbusters License? 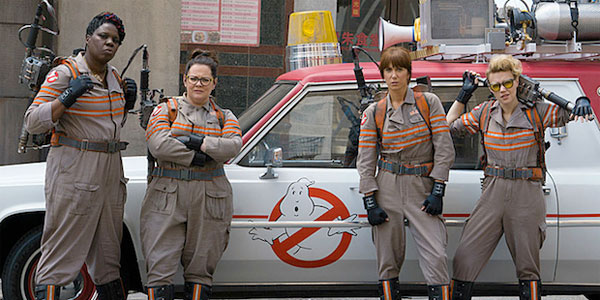 The Ghostbusters reboot will bring with it a toy line, courtesy of Mattel.  But how will they handle the property?

I guess when you have big, summer tentpole kinda movies, it should just be assumed that they will have their own toy line.  Most blockbusters have an expansive merchandising campaign along with their theatrical release, a part of this unstoppable pop culture machine in which we exist.

That being said, when I read at licensing.biz that Mattel would be the master toy licensee for the film, it sort of caught my attention.  Until now, I hadn’t considered a toy line based on the new Ghostbusters, but now I’m totally curious, what would that toy line look like?

There’s a history of Ghostbusters action figures, some of them also from Mattel… but that was when the core cast was four dudes.  With the new team made up of four women, I wonder if Mattel will have the guts to release an action figure line based around these four women.  I certainly hope so.  We’re seeing the traditional gender barriers break down more and more in our society (this is a good thing), and that change is having an impact on our pop culture as well (also a good thing).  50% of the fan base of Marvel’s movies is female; it only stands to reason that maybe fair gender representation should be a part of the content, as well as the customer base.

A lot of studios and producers seem to have embraced this concept, but the toy industry has been one of the more frustrating holdouts in this move toward progress.  A lot of people place the blame on the manufacturers, but it’s more complicated than that.  There’s licensors to negotiate with, there’s budgetary limitations, and then there’s the ever-present scourge that is backward thinking retail buyers.  These are the guys who work for the big box retailers like Target and Wal-Mart, who are in charge of choosing what products their stores will sell.  Their support will make or break a toy line.  Some of these buyers are great– I’m totally impressed by Steven Anne, the current Walgreens buyer, who has single handedly turned a drug store into one of the most efficient venues for new and exclusive action figures at mass retail– but many others subscribe to the antiquated school of thought that says “dolls are for girls, action figures are for boys.”

This, obviously, is bullshit, and the buyers are among the last folks yet to realize that fact.  Unfortunately, since they serve as gatekeepers whose influence will determine the commercial existence of a toy line, they’re kind of tough to avoid.  It’s part of the process, and the toy companies have been making some headway in terms of diversifying their products.  Every wave of Marvel Legends this year has included at least one female character.  Mattel’s WWE line has released a bunch of new women, some of whom are becoming part of that long-running toy line for the first time.  Progress is being made, and the next step is going to be made with a property like Ghostbusters, where literally ALL the characters (okay, at least most) are female.  If Mattel is smart, they’ll push for an action figure line around Ghostbusters, and get ahead of the curve with this trend– it’s inevitable that we will see more female-centric action figure lines on the horizon, with Wonder Woman and Captain Marvel each getting merchandising campaigns of their own when their films come out.

I’m sure we’ll see some Barbie style Ghostbusters, and probably something like Mattel’s Monster High dolls, too.  But it will be seriously disappointing if those are the only SKUs that Mattel releases for this property.  Mix it up, and roll out some 6″ action figures, too!  The old myth that “girl figures don’t sell” has been disproved so many times it has become obsolete.*  This is Mattel’s chance to prove it, and I hope they rise to the occasion.

*The latest sign of the extinction of this line of thinking came up last week, when Marvel’s Ike Perlmutter stepped down from his position of authority at Marvel Studios.  Ike, a former higher-up at Toy Biz in the days before they acquired Marvel, always bought into the idea that girl figures don’t sell, and there are reports that he is the reason why women like Black Widow and Gamora have been chronically overlooked in their respective toy and merch lines.