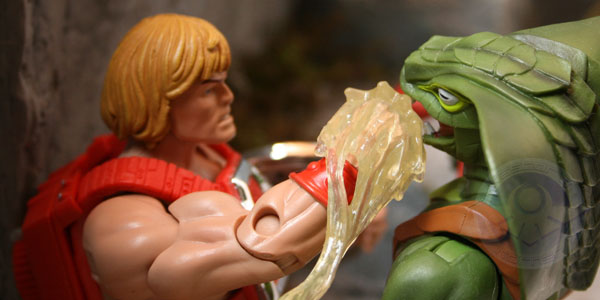 Did you give up on Masters of the Universe? Mattel wants to know why.

He-Man.org is running a poll, apparently at the behest of MOTUC brand manager Scott Neitlich, to find out why collectors have dialed back or abandoned the solid, if excessive, He-Man revitalization.  I can really only speak for myself, but I’m definitely in the “cut back” section– between increased figure costs and really indulgent (non-) character selection like the upcoming Fighting Foe Men (groan), it’s been a greater and greater challenge to bite the bullet and subscribe each year.

They reeled me back with Ram-Man, and I really have no one to blame but myself– I could have been smarter with this, and kept my unwanted Netossa MOC, to sell her off.  But I opened her instead, so she could more easily join her fellow PoP heroines at the bottom of my “Masters I don’t think are worth displaying” bin, where she will remain for the forseeable future. Maybe I’ll get it right with the Foe Men, and dump  them like a bad habit before I’m even tempted to open them… Sure, I’ll likely be one of countless collectors doing the same thing, so I’m sure I won’t come close to breaking even on what I paid for them in the sub, but at least I won’t have to look at them, and they won’t take up precious space in an unseen box of toys, so that’s gotta count for something, right?

And that, my friends, is why I’m not as in to MOTUC as I once was.

But seriously, when Mattel and the Horsemen are on, they are still ON with this line.  If they trimmed the fluff and gave us a consistent lineup of figures as relevant and perfectly imagined as Fisto and Rattlor and Mekaneck, I wouldn’t bat an eye at an inflated figure cost.  It’s when that percentage of home runs is less than 30% of the year that buyer’s remorse begins to creep in, and Club Eternia doesn’t seem like that hot an idea, all of the sudden.

Here’s the official word on the poll I mentioned, like 1,000 words ago. If you collect MOTUC (or ever did), you should click the link and give your feedback– Mattel might not always be the best at responding to what fans have to say, but they’re the experts when it comes to soliciting that feedback. So let’s give them every opportunity they present to make our voices heard.

For those of you who still purchase MOTUC with the same passion with which you started, you don’t need to read any further. 🙂

But if you’re a fan who has cut back on your MOTUC purchases, or if you have ceased purchasing MOTUC altogether, Mattel’s own Scott Neitlich wants to know why.

The poll below has various options to find out your top reason for slowing or ceasing your MOTUC purchases.  Please click here  to vote today!  This poll is open to everyone and will run until 11:59pm EST on Friday, February 1st.  Thank you for participating!