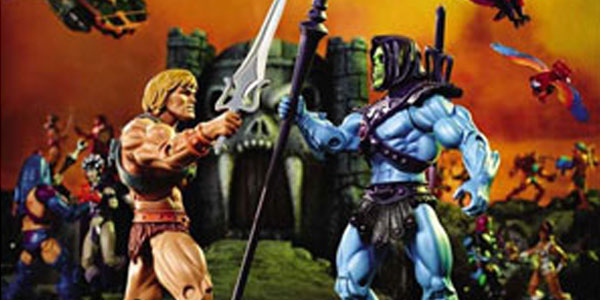 Your very own Masters of the Universe Classics toys could grace the cover of DC’s upcoming He-Man: The Eternity War #1!

This December, DC Comics will launch the new He-Man: The Eternity War comic book series, expanding on the umbrella mythology rolled into the story line and character bios written by Mattel’s design team throughout the course of the Classics series.  That’s pretty cool!

What makes it even cooler, though, is the contest currently being run around the book’s release.  The debut issue of the series will feature a toy-based photo cover variant… and the art will be provided by a fan!  Yes, Mattel is openly soliciting MOTU Classics themed fan art, and the best entry they receive will go on to be featured as the variant cover to the comic book series.  The winner will also score a year-long subscription to both the comic and Mattel’s Club Eternia… so obviously, if you’re a MOTU fan, this is very exciting.

The cover art should somehow revolve around the “Eternity War” theme, but other than having to spotlight the A-lister characters in the picture, the sky is basically the limit here.  This sounds like a lot of fun to me.

Below are more details from Matty Collector, including my favorite line, how entries that disparage or make fun of Mattel or Masters of the Universe will be disqualified.  Scott Neitlich, you know your customers too well… 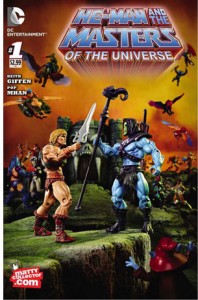 He-Man fans, this is the chance of a lifetime to contribute to the history of the brand and get the attention of the world for your amazing creative and photography skills.  Mattel is hosting a very special MOTU-Create-a-Cover Contest where you can showcase those action figure photography skills you’ve been honing, oh, only since you were 5 years old!

As you may be aware, there is a new He-Man DC Comics series starting in Dec. 2014, He-Man: The Eternity War.  It tells an epic tale of a Ragnarok-ish, Crisis on Infinite Earths-esque war to end all wars on Eternia.  He-Man will lead the forces of good—She-Ra, Man-at-Arms, Battle Cat, Swiftwind, Teela, and Orko, with an army of Snakemen backing them up (yes, you read that last part right). They will be up against Hordak, Skeletor, King Hssss, Beastman, Trapjaw, and Evil-lyn.  It’s an all-out battle royale for control of Castle Grayskull and the fate of the universe!

The subscriber variant of issue #1 of He-Man: The Eternity War is slated to feature an action figure photo tableau that pays homage to this Powerful story line and Mattel and DC Comics want to feature the art of a talented fan photographer.  This is an open call for submissions.

There will be one winner who will not only have his work showcased and credited on the cover of issue #1 of He-Man: The Eternity Wars subscriber variant, but the winner will also be rewarded with a year’s subscription to the MOTU Classics Collector Toy Line and the MOTU DC Comic series.

There will be two runners up who will receive their art specially featured on the He-Man Facebook and Instagram pages, 3 assorted Matty toys, a year’s subscription to the MOTU DC Comics series, and handwritten feedback from the MOTU design team.

All submissions that are deemed appropriate will appear on the official He-Man Facebook and Instagram pages! Mattel encourages entrants and fans to rally around the hashtag #MOTUCoverContest on social media.

The creative guidelines for submissions are as follows:

Specifications for submissions are as follows:

Official comic cover specs – Final image must adhere to below specs to be eligible as a contest submission.

Please use the attached image to ensure that your submission has the proper layout to accommodate the title, DC logo, and other elements that will be laid on top of your image if selected as the winner.

Please send submissions and any question to MattyCollector.com at Matty@Mattel.com with the subject line “MOTU Cover Contest”.

By submitting any artwork to the above email address for this contest, you acknowledge that you have read and understand the rules of the contest. Any emails not properly labeled in the subject line as “MOTU Cover Contest” will not be opened or reviewed. Thank you for your time, artistry, and commitment to MOTU.  Best of luck!