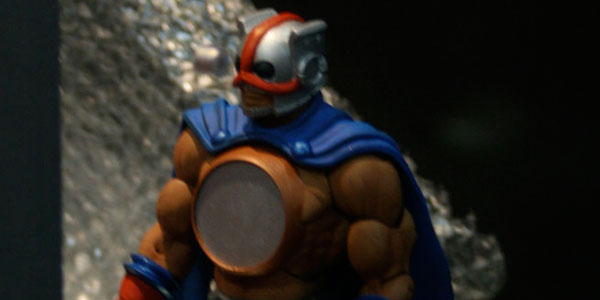 Strobo, 2013’s traveling convention figure for Mattel’s Masters of the Universe Classics, was offered in limited quantities to Club Eternia subscribers… and sold out in under five minutes.

UPDATE:  As reader Nick pointed out in the Comments, Strobo WILL be appearing at Grayskull Con in Germany, so he’ll have at least some European presence… That being said I still really hope Mattel gets him back into production so he lasts longer than 5 minutes when he returns to Matty Collector later this Fall.

I get that predicting demand for toys is a tricky science– there’s no concrete formula to determine how popular (or unpopular) a particular figure will be.  That’s especially true for obscure side characters like Strobo, a name that only die hard MOTU devotees will recognize.  So I can’t really blame Mattel on this one, but the Cosmic Hero managed to sell out on Matty Collector early today in record time.

The good news is, unlike monthly figures, there will be more opportunities for fans to add Strobo to their collections, as the figure will be offered at three conventions throughout the year, as well as on Matty Collector once again in October/ November.

The bad news is, all three conventions are in the US, meaning international fans will have to wait until the Fall for even a chance at picking this guy up.  He-Man is a property whose worldwide appeal has been strong, and there are lots of non-US MOTU collectors.  I feel bad for them in this quick sell-out, because they’re now down to one legit option to purchase this figure (aside from feeding a scalper on eBay, that is).

I’m hoping that Strobo’s early sales numbers this month motivate Mattel to put him back into production, to ensure there are enough figures to go around by the end of the year… they have over six months until Strobo retires from his Con travels, and with the tooling done and the molds ready to go, it seems like Mattel could only stand to profit by casting a new batch of these guys to accommodate their non-US fans.  Especially in light of his unexpected popularity, which I can only assume is legit (do you think that many scalpers were really planning to gobble this kitbash up, before 11:05am?)

Here’s what Mattel had to say about today’s surprising sales numbers, courtesy of “Toy Guru” himself, Scott Neitlich:

I know there is some concern about Strobo selling out fast. As we noted, he really is our “2013 traveling convention” figure, but as a special bonus we made a very small amount available during Early Access for sub holders. Strobo will still be available at Grayskull Con, Power Con, NYCC and a limited amount in late fall on Mattycollector.com (much as we did for TOD Sorceress) so today was not the only opportunity to get Strobo.

See you at the shows!