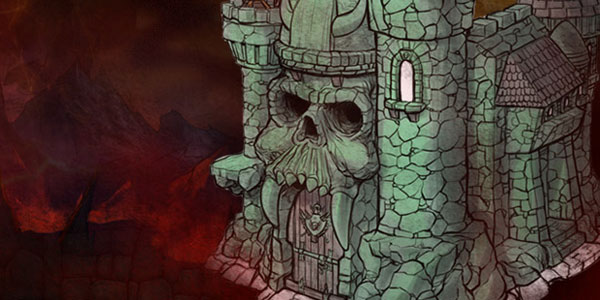 There’s only a few days until Mattel’s production goal deadline for the proposed Castle Grayskull, and they’re making one last push to make the epically-proportioned playset a reality.

Grayskull is arguably THE playset when it comes to 80’s toys– any card-carrying geek would recognize the seafoam green rocks of He-Man’s mighty castle from a mile away.  Mattel is much less than a mile away from hitting the production numbers they need to make their new, Classics collection Castle Grayskull a reality, but they’re running out of time.  While preorders for the Masters of the Universe Classics centerpiece are technically open until January 3rd, November 12th (that’s next Monday) is the deadline by which the toymakers must have their minimum number of preorders in if they are going to go forward and make this playset happen.

The original Castle Grayskull was the envy of any kid’s toy collection, and the new version, like the best of the MOTUC series, will feature an updated but classic approach to the castle– basically, the same kids who loved Grayskull growing up, will now have a new, even better looking version to use as the centerpiece for their Classics collection.  And what a piece it would be– as a long-time toy collector, space and size issues become real concerns, and as much as I still feel that geek blood boiling up when I see a massive 2 foot tall Voltron or a 3 foot SHIELD Heli-Carrier, there comes a time when practicality trumps nerdiness.  Grayskull feels like it could be different– this is a complimentary piece to the Masters collection, only on an enormous scale.  There’s no denying I want this thing, and between the castle’s legendary history and its functional practicality as a display piece for the MOTUC collection, I’m edging ever closer to justifying the purchase.

Mattel is sweetening the pot a little, as well, offering a limited edition cross-sell poster featuring every MOTUC figure released thus far, in the same print proportions as the previous sub exclusive maps. As a solid, but not diehard Masters fan, the poster’s not much of an incentive to me, but I’m sure the devotees will love it.  I would have much rather seen Mattel drop the price back to their originally announced $200, which would be a lot easier to swallow.

In the past, Mattel has extended end dates on their Matty Collector solicits, but I don’t think that will happen this time– their January end date is already a reasonable 3+ month window in which to place a preorder, so I think the November 12th thing is pretty set in stone (no pun intended).

I’ve had my issues with Mattel and their creative decisions in the past, but I have to admit they’ve done an overall fantastic job on realizing the ultimate Masters of the Universe toy line, and Grayskull is both an integral– and ambitious– part of that plan. They’re going big with this, and for that, they should be applauded whether Grayskull moves forward or not.  And I can honestly say, I really hope they can pull this off.

To preorder your Castle Grayskull and help the MOTUC cause, Click Here or on the banner below: