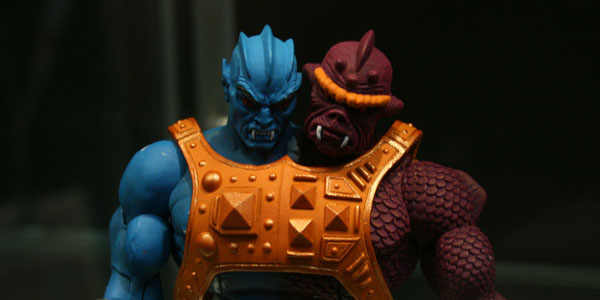 Hats off to Mattel for learning from their mistakes!

Mattel has revealed that Two-Bad, the January 2014 MOTUC release, will be a subscription only figure, with no day-of sales available.  They made a similar announcement in advance of the July release of Clamp Champ, another highly desired vintage character getting an update.  The difference is, their Two-Bad announcement comes while the 2014 Club Eternia sub is still available for purchase.  So fans can still DO something about it.

I wrote a piece about the horrible mishandling of the Clamp Champ announcement— which came off less like a strategic business move and more like a punishment for fans who didn’t or couldn’t subscribe, a condescending and slightly bullyish “we told you so” from Mattel to the very people that have funded the MOTUC project all along.

But Mattel did right with their Two Bad announcement.  Even though the message is the same, it’s all about timing– the 2014 sub is still on sale until August 19th, so the news about Two Bad comes early enough that fans can still react accordingly.  If you really want this character, you can still grab a sub.  If you want two Two Bad’s, you can order a second sub.  It’s a simple problem-solution, which Matty Collector can capitalize off of.  Had they waited until the sub closed, they wouldn’t have the potential to make more money, and they’d have a Horde* of pissed off fans… again.

So kudos to Mattel on learning from their mistakes, and creating a scenario mutually beneficial for their company AND their fans.  Sometimes it doesn’t take a lot, but those slight changes can make all the difference.  The 2014 Club Eternia subscription is on sale now through August 19th– CLICK HERE to place your order today.

*Sorry, I couldn’t help myself.