Mattel Spits In The Eye Of MOTU Fans 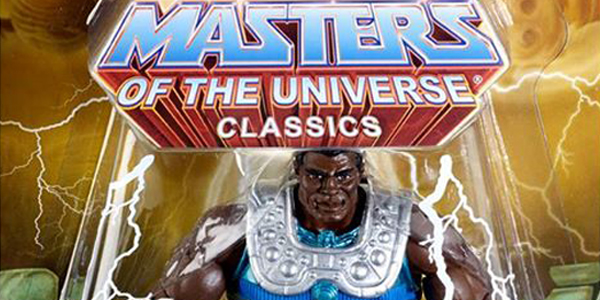 Mattel flaunts their fantastic MOTU Clamp Champ… and reveals that he’s for Club Eternia subscribers only.

Mattel has been on the upswing for the past year or so.  After a heaping dose of humble pie during the post-Comic Con sub solicits in 2012, it seemed like the often callous toymakers had finally realized a simple truth for any business– if you don’t treat your customers well, they will walk away.

2013 was a close call, but it appeared to be a lesson well learned… Except no, not really, apparently.  Earlier this year, Mattel announced their Fang Man figure would be the first Club Eternia Master of the Universe to NOT go on sale to the general public during the day-of sale.  It angered some people, but seeing as how niche a FilmMation character like he was, even among avid MOTU collectors, he seemed an ideal candidate for a semi-limited supply.  It made sense.

The utterly worthless Fighting Foe Men would have been another ideal candidate, but Matty was more than happy to force those guys on everyone, locking us in for three garbage figures that have no place in any MOTU collection, leaving collectors to try to unload them on eBay for about half what we paid.

I guess our “reward” for getting stuck with such a bunk purchase in May is the ability to own a core MOTU character like Clamp Champ, because Mattel just announced today that the Eternian warrior will, like Fang Man, not be available during the public sale in July.

This is such a bad move, on every level imaginable– the core MOTU collection that most fans care about is the vintage figure lineup, of which Clamp Champ was clearly a part.  Fans have been dealing with years worth of “red screens of death” to reassemble their vintage MOTU collection using these great, modern upgrade toys that Matty cranks out month after month.  We deal with a sub half full of junk even most completists would balk at, just for the security that we can own the desirable figures we actually want.  And now, in spite of all that, anyone who didn’t commit to the entire 2013 subscription is out of luck when it comes to a core character like Clamp Champ.

This not only devastates Mattel’s semi-improved image with their customer base, but it also shoots themselves in the foot financially.  The same company that was reduced to begging us to sign up for subs, promising that each and every dollar is critical to save the line, is now limiting the run on a figure virtually every MOTU collector wants to own.  That Mattel would make this call less than a month before Comic Con, when they need to put their absolute best foot forward in order to reach their 2014 subscription goals, is so absurd it almost seems like they’re trying to tank their own toy line.

There’s a lot of sites out there who will help Mattel spin this impossibly awful decision (most of whom do it for free toys, or the promise of free toys)… but don’t let them sway you.  This is BAD BUSINESS, through and through.  And the way bad business is dealt with is simple– don’t give them money.  I have a subscription for Club Eternia in 2013, and I was fully planning to keep going next year.  But if Mattel is going to use these kinds of fear tactics– holding beloved characters hostage in order to strong arm sub sales– well… it’s gonna be a long, hard decision on whether these toys are worth supporting that kind of behavior, no matter how good they may be.

Here’s what Mattel had to say, along with some photos of poor Clamp Champ, who thus far remains a hostage of Mattel’s lousy business tactics:

Just  got in final package samples of July’s Clamp Champ figure! Note that while this is a monthly figure, like Fang Man, Clamp Champ here will not have any “day of” stock for 2013. So the only way to get him in July is if you are a subscriber! (hey, Club Eternia has its benifits!)

We are all so pumped for SDCC right around the corner, but until then, here is a new packaged shot and bio to feed your MOTUC needs!

See you in San Diego!

PS: Don’t forget the 2014 Club Eternia subscription is on sale now! More details at SDCC at our fan panel at 11:00 on Friday July 19th in rooom 25ABC. 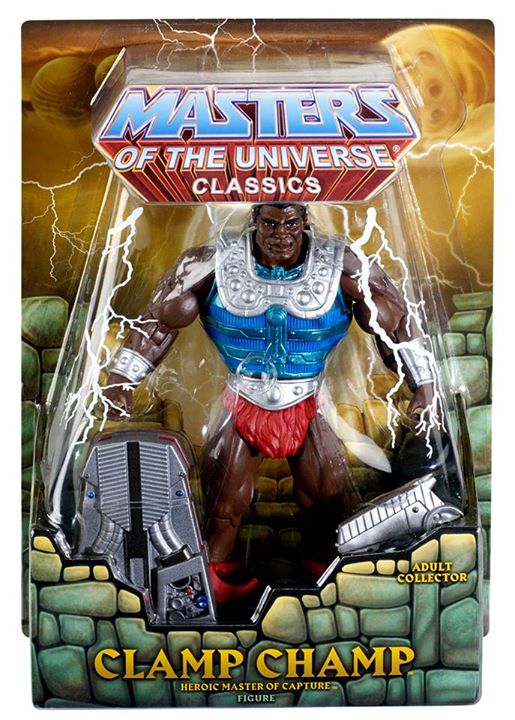 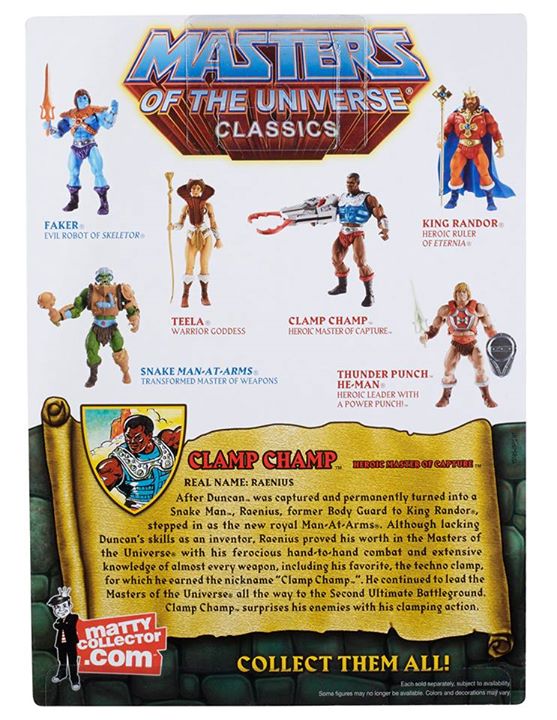