Mattel 2013 Subscriptions Are Back On Sale 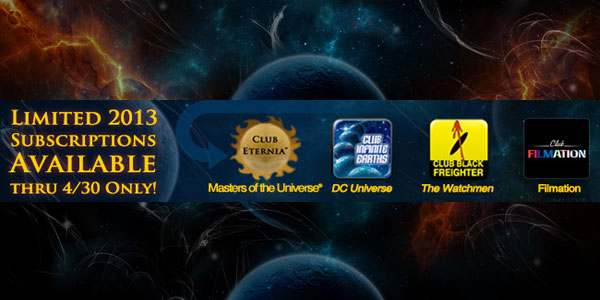 Missed the signup for Matty Collector’s 2013 subscriptions? You’ve got another chance to jump on board until April 30th.

Mattel just announced that they will be re-activating the sign-ups for all four of their 2013 subscriptions for two weeks starting April 15th.  If you’re kicking yourself for not signing up, this is a way to pick up before it’s too, too late– yes, you’ll be out any figures that shipped January through April, but from May on you’ll be locked in for each monthly figure per sub.

One of the biggest requests we get is from people who missed the subscription enrollment period and want to jump into the current year. If you’re one of them, here’s your chance because we’re re-opening enrollment in our 2013 subscriptions!

This is a “club light” kind of thing… subscriptions purchased during this period will include figures released from May through December of 2013 (figures released January through April aren’t included). We’ll update each club’s product page with all the details when they re-open for purchase on 4/15.

I think this is really good news, actually!  I bit the bullet and took a chance on the Watchmen subscription last Summer, and was handsomely rewarded for it with some amazing toys.  But this is a chance for fans who were on the fence to sign up and still get four of the six figures (and believe me when I say, they are probably going to be worth it).

It’s also very smart that this news comes out so shortly after the release of Fang Man in the Masters of the Universe sub.  I have no real affinity for FilMation, but after seeing what Mattel could do with that guy, I was hoping there would be some other way I could lock in the six FilMation figures being released in the back half of the year.

The sign up starts on April 15th, which gives a little leads time to start pinching some pennies to make sure you don’t miss anything in what is turning out to be a banner year for Matty Collector.