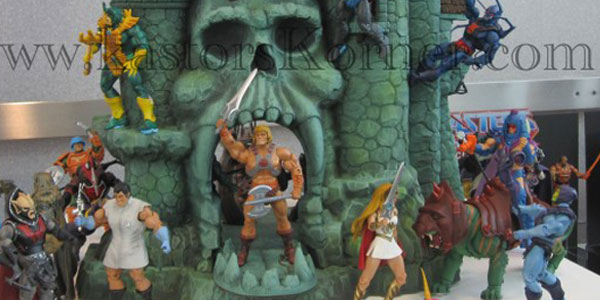 There’s changes coming for Mattel’s show-stopping Castle Grayskull playset, and Scott Neitlich is on the forefront, offering as many details as possible to collectors.

Mattel doesn’t always have the best track record when it comes to follow-through on their products OR customer service, and that’s why I’m very impressed with the way Scott Neitlich, Matty Collector’s brand manager, has been over-communicating the status updates on the upcoming MOTU Castle Grayskull playset.

He recently posted to He-Man.org with the latest update, in which he addresses some of the (expected) production issues with the Castle, such as a reduction in size and thickness of the walls, as well as some features they are working into the piece based on fan feedback at Toy fair (a space for the Sorceress’ wings! Yay!)

After the radio silence approach to the cutbacks on the Back to the Future Hoverboard (leading to many jilted fans feeling ripped off), it’s big of Mattel to not only communicate updates on what the final product will look like, but also honor cancellations between now and August.

So typos nonwithstanding, I really do respect Scott’s new approach to sharing this project, and I hope it keeps up as we all learn more about Castle Grayskull’s road to reality.

Hey He Fans and She Ravers,

With a lot going on right now (Filmation, Castle, end of the Mayan Calendar etc…) I wanted to try and reach out and clear the air. Their are a lot of posts floating around and some concern that I hope I can clear up.

First off. Loud and clear. I know some fans/customers want the Castle to be larger or at the least as large as the initial B-sheet and foam model and dimensions given on the Castle’s pre sale page. Now to bring this to the “legal base level” we did make it clear on the pre sale page that all size dimnesions were estimates and subject to change. The Castle from day one has been an unpresedented project. I mean come on, selling in a 6″ playset from a drawing B sheet? Who does that? And having a fan base strong enough to make this a reality? Only He-Fans are that strong!

I wish we could make the Castle bigger, I really do. And I totally understand some fans/customers want this as well. Bottom line, is that based on the price of $250.00, the current sculpt is 100% the biggest we can get. Yes. It is an inch or two smaller than the dimensions given at presale. And 100% we still expect some changes to happen (not neccessarily to the size but possibly to some of the accessories). We are committed to making sure to update everyone as the process continues to be as upfront as possible on any changes coming through.

In no way is anyone trying to hoodwink or scam anyone. As I said. This entire process is very unprecendented. Change is inevitable. The Castle will continue to evolve but everyone working on it from me, to the Horsemen to Ruben and Mario from design and so forth are completely committed to devliering the best playset we possibly can. In no way do we expect to please 100% of the fans. With fans as passionate as MOTU fans, no one expects to do that. We are not secretly trying to bring down the brand. (never seem to understand where that comes from to tell you the truth!) Why would I do anything to prevent more cool MOTU collector product from being made? After all, I am a collector too you know!

And I know my answers can many times come across as “corporate”. A lot of that is just circumstantial. Many of my answers have to go thorugh the “PR machine” and get approved. I try to joke it up when I can (like mentioning that the Flag can be placed in your fridge) but if my tone offends anyone, please just know that I don’t have 100% control over messaging even I put out. If we are saying “no” to fan suggestions, it doesn’t mean we disagree with the suggestion, it often just means it is just not something possible.

I often wish I had a magic wand and could just make the perfect toy happen. As is; we are fighting day in and day out to make the entire MOTUC line (including the Castle) the best it can be. I think when folks see the final model in San Diego, fears that the size is not up to snuff will be dilutted. Those who were in person at NYTF (i.e. Val, Dan) have been pretty vocal that the castle is huge. Yes, it is slightly smaller vs the foam model, but that is just part of the toy making process.

And to reassure everoyne that we are not trying to “pull a fast one” note that you can 100% cancel your order all the way through Aug 30 if in any way the ev er evolving playset does not meet your needs. (but note when you cancel, you can not then go back and reinstate, so do think carefully).

In the end, this is going to be an amazing peice and I hope will please the majority of fans. We are actively working on the following changes from what was shown at NYTF:

Beyond that, their just is not time or resources to make changes. We 100% hear fans on many suggestions, but when we say “no we can’t make that change” it is not meant as an insult, it is just letting fans/customers know that factually that change can’t be made. If I gave the impression that the model shown in NY was going to change, then bad on me. But to be clear now, their won’t be changes beyond what was shown and noted above. We hope everything shown in NY will be in the final toy, but their is always a chance things may change/get cut. If that does happen, we will be sure to let everyone know.

Looking ahead, boy do we have amazing things coming down! Club Filmation, SDCC exclusives (to be revealed in late Spring) and the 2014 line is shapping up well. I have worked with the team to create a new roadmap that if we get a 2014 and 2015 line should wrap up the vintage lines and most of the major fan requested animated figs. It doesn’t mean we won’t get to more in 2016 and beyond, but with rising costs we wanted to do all we can to get to the vintage line in the next two years.

A lot more is still to come in 2013. We won’t know more about 2014 until after the sub sell in at SDCC this summer. I’ll try to get on the boards this weekend and jump in on RGD if I can. We’ve got so much good stuff to look forward to, I am nothing but grinning ear to ear.

See you all on the boards!