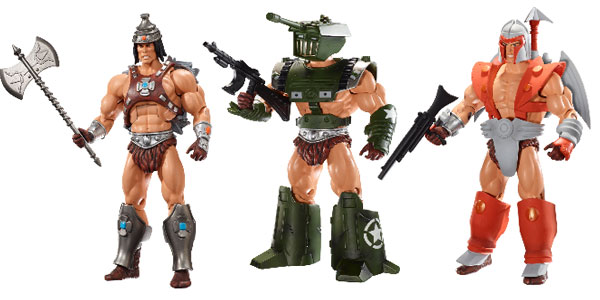 Last Friday Mattel revealed the first batch of exclusives they have planned for this year’s San Diego Comic Con, and the showing definitely doesn’t seem to pack the same punch as years past. Check out Mattel’s SDCC 2012 offers, and what we think of them…

For the past few years, Mattel have been the kings when it comes to Con exclusives. While that may sound like a compliment, it’s actually a double-edged sword… while Matty has delivered tons of amazing toys at Comic Con, such as Lobo and Swamp Thing, He-Ro, Queen Marlena, Orko and more, there’s been a cost (and I’m not talking just the inflated price tags). Con exclusives are tough because practically speaking not everyone who wants them can make it out to the show. On top of that, even those who do go to the show have to weigh options– is it worth paying for admission just to waste an entire day waiting in line to buy the exclusives they want, while missing all the other cool events going on?

It’s a tough call, and has created, at least for me, a real love/ hate relationship with Con exclusives, and this bad side of collecting exclusives really comes to light each year when navigating the impossibly long lines at booths like Hasbro and Mattel. Mattel has been much better than Hasbro in trying to come up with a more appropriate solution to the problems with Con exclusives, offering a limited supply online at a pre-announced time for collectors who can’t make it to California, and offering preorders for attendees to pre-pay and pick up their goods whenever they want at the show. But it’s still an impossible hastle, and I’ve always wondered how many folks would endure the pain of exclusives shopping if the products weren’t awesome enough to mandate it. 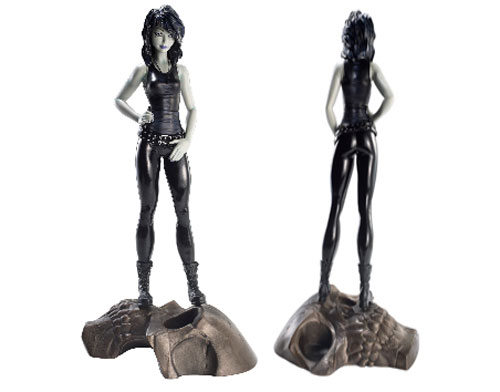 It looks like I may get my answer this Summer, as Mattel has released their 2012 crop of SDCC exclusives, and, well, they’re by and large pretty lackluster. We get a few non-DCUC comic offerings, in the form of a new set called “Tiny Titans,” which look like a more anime-inspired riff on the Action League, some Polly Pocket figurines dressed like villainesses from Batman’s rogues gallery, and an 8″ Death statue. While we don’t have any details on Sandman’s sister, she looks pretty pre-posed, and the 8″ listing means she’s clearly not in any kind of scale with the DC Universe Classics series. It’s very cool that this reveal suggests Mattel has control of the Vertigo license as well now, but why in the world would they release one of Vertigo’s most popular characters in a completely different scale and style than their long-historied DC Universe line? It just doesn’t make sense.

We also get a new Cars exclusive of some kind, a few Hot Wheels (including KITT from Knight Rider, which is sure to rival last year’s Back to the Future DeLorean), and a release for the long-delayed Dana as Zuul, from the Ghostbusters series. The sculpt looks decent from the prototype we’ve seen (worlds better than Vigo and Louis), but with the line clearly over, I wonder how many collectors will be motivated to pick up Dana, when she does nothing to round out the core cast, since Jeannine is still MIA from the line.

The best offering for this year is, as expected the Masters of the Universe figure, Vykron. Based on an unused concept from the ’82 series, Vykron is a warrior who includes three interchangeable outfits, so he can switch from a viking to a spaceman to a tank-headed soldier. It’s a great tribute to this long-forgotten concept which is both perfect for this year’s MOTU 30th Anniversary, and also that perfect Con exclusive– as cool and novel as it is, ultimately, pointless. The especially shrewd thing about Vykron is Mattel’s inclusion of all three outfits with each figure, which all but guarantees three figures purchased by virtually all He-Man fans at the show and later online at Mattycollector.com.

MOTUC has had some great Con exclusives in the past, and Vykron may be the most perfect one they’ve done yet– he’s fun, cool looking, and yet inconsequential to the overall line, and clearly intended for multi-figure purchase. Let’s hope Mattel produces enough of this guy to cover all the triple sales.

There’s a few more items yet to be revealed, including this year’s Monster High exclusive, and a Dark Knight Rises movie piece, but overall, with the exception of Vykron it looks like it will be a pretty light purchase year at this Summer’s Convention.

For more details on this year’s Mattel Comic Con exclusives, check out the press release at Matty Collector.