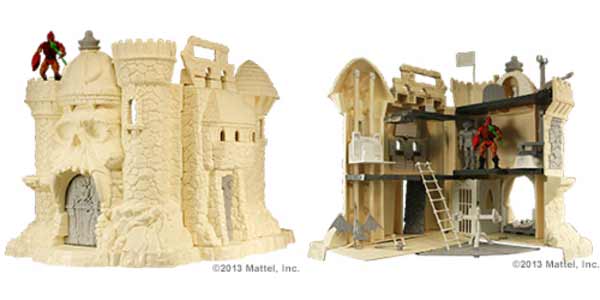 Leaked images from many of Matty Collector’s 2013 lines hit the net, a few days prior to Toy Fair.

Yesterday, Mattel got kind of caught with their pants down, as a resourceful fan found a backdoor with lots of promo images of the upcoming Masters of the Universe, DC Club Infinite Earths and Watchmen figures we will see debuted (officially) at Toy Fair.

The only new Watchmen figure was The Comedian, who looks just as fantastic as Rorschach and his fellow antiheroes. Infinite Earth’s offerings look equally impressive, with some gorgeous new tooling added to the previously-announced Huntress and now-confirmed Fire.  The two heroines look to be among the best DC women in the lineup, and the added gear on Huntress and sculpted top on the JLA’s hottest hero really make them stand out.  I’m really excited to add these two to my collection!

Masters of the Universe is where things get a little mixed.  The biggest news is the first look at Mantenna.  The Horde warrior looks fantastic, instantly recognizable yet a dramatic step up from his vintage figure.  The other classic figure we get a new look at is the New Adventures He-Man, who came out insanely good– the all-new armor and removable helmet are fantastic additions to this welcome new look for the most powerful man in the universe.

Where it falls apart, though, is the rest of the new lineup– Matty is certainly going heavy with the FilMation stable, as we’ll see Batros, Castaspella, Icer and Shakoti in this year’s subscription.  Look, I don’t begrudge any die-hard He-Fans out there, but I have no use for these marginal characters.  I had hoped the reviled Fighting Foe Men would be the nadir of this year’s offerings, but with four more unnecessary tangential characters, we’re running out of spots for relevant figures in 2013.  That’s a shame, as this year’s sub was already feeling like a stretch– I can tell you right now, even with Ram-Man and Mantenna I’m really feeling the buyers’ remorse of signing up for the 2013 Club Eternia.

The other mixed bag is Castle Grayskull, whose prototype made its debut as well.  It looks wonderful, full of amazing sculpted detail, plenty of cool accessories and a great sense of scale… but my concern is the cost-cutting we’ve seen by Mattel in the past– we know how the Back to the Future hoverboard turned out, and I’m nervous that a dumbed-down, cheaper final version of Grayskull would hurt even worse, having seen this fantastic prototype.  It’s too early to tell on that one, so I’m not gonna write it off yet.  But the lame character selection in this year’s sub has me more apprehensive than ever about the future of MOTUC… and my own interest is fading fast.

You can see all the leaked photos over at Toy News International… and check back this Sunday for lots more photos as we cover the Matty Collector event at Toy Fair, right here on Kastor’s Korner!