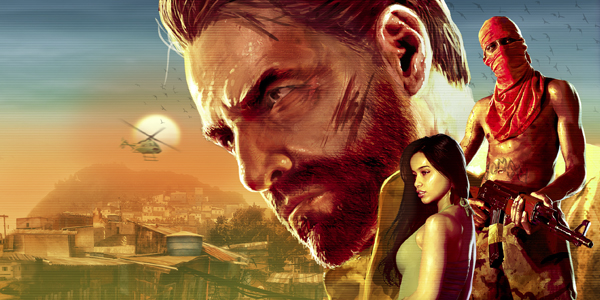 With its last entry having been released nearly ten years ago and its sequel suffering numerous delays and setbacks, the future of the Max Payne franchise looked bleak for a while.  When the first footage of Max Payne 3 was finally rolled out last year, I was admittedly a bit apprehensive about the drastic changes apparent to the game’s trademark aesthetic that I remembered so fondly.  Some hands-on time at this year’s PAX East alleviated most of my concerns but, now that I’ve had an adequate amount of time with the game, I can tell you, as a huge fan of the series, this title could not have turned out better.  Even with the insanely high bar I had set for it, Max Payne 3 exceeded all my expectations.

Rockstar’s development team should be commended for their work on this title.  It’s so well-crafted, so superbly written, and presented with such bravado that I honestly don’t know where to start praising it.  I will say that I don’t make it a common practice to play a game for thirteen hours straight without any breaks whatsoever, but Max Payne 3 grabbed me so hard right out of the gate that I literally could not put it down.  Everything that made the first two titles special is immediately prevalent, specifically Max’s no-so-subtle, constant internal monologue.  Dripping with metaphor and cynical as ever, the script alone is worth experiencing the game.  It’s one of several factors that really encompasses a sense of realism throughout the duration of the story.  Even if you’re not familiar with Max’s past or the previous games’ narratives, you will instantly be able to get a feel for the character and his motivations. 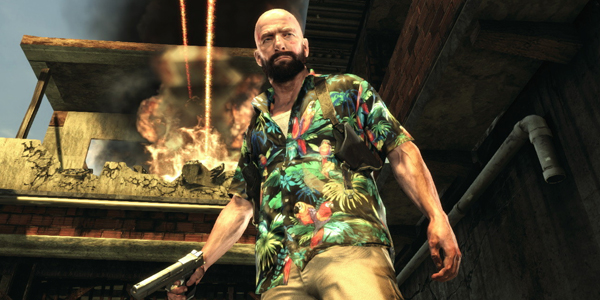 Displaced from New York, Max Payne now resides in São Paulo serving as a bodyguard to wealthy real estate mogul Rodrigo Branco and his family.  Rodrigo’s wife and her sister are targeted to be kidnapped by a notorious street gang while under Max’s watch, setting a series of events in motion that get exceedingly darker and more shocking as the story unfolds.  The political intrigue present here is really edge-of-your-seat stuff and, in keeping with the franchise’s approach to storytelling, there is no dramatic irony – the player, seeing the world through Payne’s eyes, only experiences narrative progression and plot twists at the same time that Max does. And, thanks to the greatest voice acting in recent memory, Max’s commentary on the events surrounding him and his interactions with a colorful cast of characters keeps you hanging on every word.

As amazing as the writing is, Max Payne 3 has the gameplay to back it up.  In addition to being able to customize your controls with four intuitive button layouts and fine-tune the analog stick sensitivity, you are given the option of choosing three aiming modes: hard lock, soft lock, and free aim.  The latter gives players an added challenge (and classic Max Payne feel) by forcing you to manually aim your weapons, while the two former options snap onto enemies for you.  My first playthrough was on Hard mode with free aim on, which presented a solid challenge and unlocked two additional difficulty modes to tackle after I finished.  Max’s signature bullet-time returns and is incorporated beautifully into the game.  Assuming you have accrued adrenaline (built up by shooting enemies or getting shot at) you can click the right analog stick to enter a slow-motion, adrenaline-fueled state of mind in which everything is slowed down except for your aiming reticule.  Clicking the right bumper will have a similar effect as you enter shootdodge mode, which sends Max leaping horizontally in the direction of your choosing.  New to this title, once the shootdodge ends and Max is lying on the ground, you don’t automatically stand back up – instead, you can actually continue shooting 360 degrees around you while you are in a prone position. 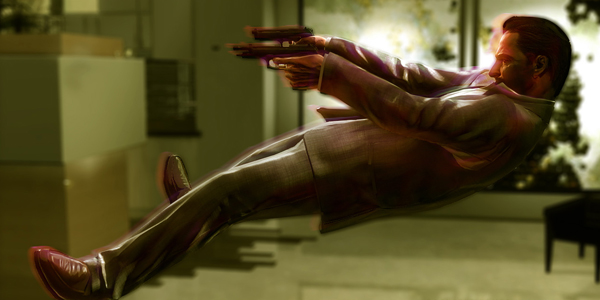 The game will also enter a slow-motion state in a few other scenarios as well.  One occurs when you kill the last enemy in a given area – a slow-mo “bullet cam” will track your bullets directly into your victim with gloriously violent results.  Another happens (assuming you have painkillers in your inventory) when an enemy takes a fatal shot at you.  Instead of dying outright, Max turns to face his attacker while collapsing.  If you manage to kill your assailant, you will be able to soldier on at the cost of one painkiller.  Finally, as a new addition to the Max Payne series, you can run up and perform a melee attack.  Get in close and execute a quick button tap to see Max crack his enemy’s face with the butt of his handgun and, as they recoil in pain, you can steady your gun and blow their brains out in slow-mo.  Thanks to the realistic entry wounds and blood splatter, none of these sequences will ever get old.

Also new to the series is a cover system that allows Max to hide behind destructible objects to avoid gunfire.  You can blindfire from behind cover, but don’t expect it to be accurate.  True to real-life, you’ll need to expose yourself in order to peek around a corner and look down your gun’s sight if you hope to kill anyone.  I had mentioned a realism that is really noticeable throughout the campaign and this is just one more piece that plays into it.  Really though, it’s the amazing physics and ballistics that steal the show.  Thanks to some well-implemented motion capture technology, characters move believably and look like they carry realistic weight.  Whether swinging from a chain or trying to maintain balance on the roof of a collapsing building, Max’s body moves as a real person’s would, shifting his legs and arms to distribute his weight.  Similarly, you can’t carry an arsenal on your person – Max has two pistol holsters and two hands, which means you can carry up to two handguns and one larger weapon like a shotgun or rifle.  The devs meticulously took the time to ensure that carrying a reloading these weapons looked as realistic as possible.  While reloading a pistol, Max has to tuck his shotgun under one arm to free up his second hand, which is otherwise occupied holding the larger gun at his side.  Want to relive a John Woo movie and pack a pistol in each hand?  Looks like you have to throw away that rifle entirely. 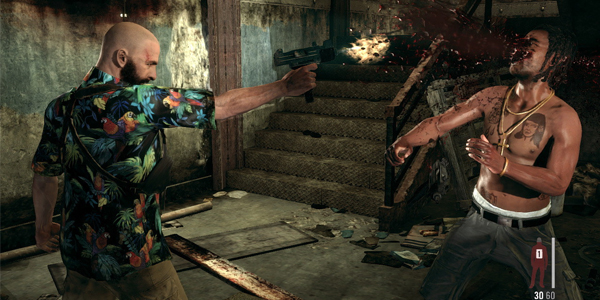 One other note that I just want to add before getting into the multiplayer portion is that Max Payne 3’s soundtrack is incredibly awesome.  Performed primarily by the band Health, it fits the mood of each scene absolutely perfectly.  In fact, certain sequences (much of Chapter XIV comes to mind) feature some of the greatest music I’ve ever heard in a video game. Ever.  Good call, Rockstar.

Okay, so let’s touch on the multiplayer aspect real quick.  I honestly viewed this as a total afterthought before trying it out as it’s become common to see shoddy online components tacked onto single-player gaming franchises.  Not so here – it’s actually a fully realized multiplayer suite and I’ve been having a total blast with it.  Deathmatch and Team Deathmatch are what you’d expect, with plenty of faced-past murder happening as players try to out-kill one another.  Payne Killer is a fun mode in which the player with the first kill of the match becomes Max Payne.  All other players then vie to kill Max and become him (or his partner Passos) in order to assume the role.  Both Max & Passos are more heavily armed and tougher than average opponents to take down. 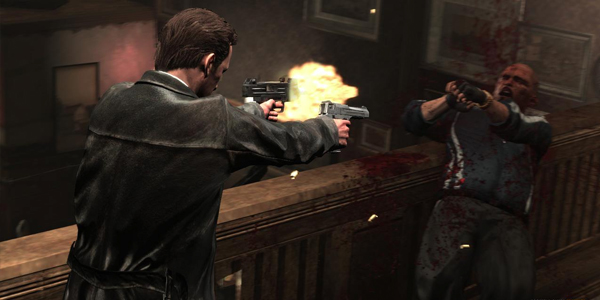 The main draw to the online component, though, is Gang Wars, a multi-stage match that dynamically changes depending on each team’s performance.  Each stage will find two teams of 8 trying to complete specific objectives, culminating in an all-out battle at the end.  It’s great, straightforward fun made even better by a robust ranking system with tons of upgrades, unlockables, and the ability to gain some extra XP or cash by looting the bodies of people you drop.  In addition to conventional weapons and armor, your online character can be outfitted with gadgets that grant specific perks and “bursts” which grant you several awesome abilities.  Fueled by a meter that’s similar to the adrenaline bar in single-player, you can activate a more powerful burst depending how much of this meter is filled.  For instance, if you outfit your character with the “Trigger Happy” burst, you may activate it at it’s first level to temporarily gain access to armor piercing rounds.  Fill it to level three and you can access a grenade launcher for a short time.  I’ve been having a great time with it and, especially with a number of DLC packs on the way this year, hope that Max Payne 3 sees a solid online community for some time.

Bottom line is, if you have an Xbox 360, Playstation 3, or PC, don’t pass this one up — you’d be depriving yourself one of the greatest cinematic gaming experiences ever released – both visually and narratively.  Much like Tarantino’s best offerings, even when there are lulls in on-screen action (of which there aren’t many of here), the dialogue is so razor-sharp and entertaining that just hearing character interactions becomes equally exciting.  And, although the “old-school” mechanic of non-regenerating health can provide a steep challenge (you must pop painkillers to stay alive if you take too much damage), there are enough difficulty options to really make the title accessible to anyone.  As I said, everything about this title completely exceeded my lofty expectations – Max Payne 3 is a true achievement that everyone at Rockstar should be proud of.