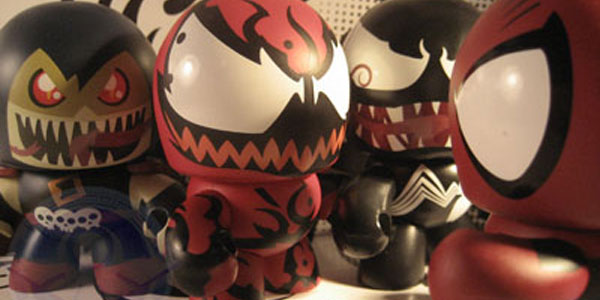 Hasbro’s Mighty Muggs made a 100% Pure Awesome return this Summer at SDCC, and the return continued with the new Maximum Carnage exclusive set at New York Comic Con! The new set of mini-Muggs features our favorite web-slinging super hero Spider-Man, along with some of his most dangerous foes– Venom, Carnage, Demogoblin… and perhaps his most hated enemy of all, J. Jonah Jameson! Thanks to our friends at Hasbro, we got the chance to check out this awesome new set!

Mighty Muggs started a few years ago, as Hasbro’s answer to the designer/ vinyl toy scene, with awesome, hyper-stylized designer figures based on everything from Star Wars and G.I. Joe to the Marvel Universe. With a uniform scale, base body and even package design, Muggs were a great way to sport a collection of Mola Ramm, Admiral Akbar, Destro and Venom all on one shelf, and they were totally fun to collect. Sadly, Muggs never caught on at mass retail, but Hasbro has still been treating fans to the new “mini Muggs,” a new smaller (about 3″) scale, as store and convention exclusives. This Summer’s San Diego Comic Con featured an awesome Avengers box set, with mini Muggs of the core Avengers team, even an oversized Giant Man! But that wasn’t the only set of the year– Hasbro brought the super cool Maximum Carnage box set as a New York Comic Con exclusive last month. The set features probably my favorite packaging of any con exclusive this year– the five mini Muggs are displayed in a smart window box, shaped like the Daily Bugle building! The packaging is fitting, since it contains Spidey (in a red and black deco, stylized beyond his traditional webbing into a shadow/ texture across his costume), Peter’s cantankerous boss J. Jonah Jameson(!), plus Venom, Carnage and Demogoblin. The characters in this pack all make lots of sense, since they were all key players in the Maximum Carnage storyline, and it’s totally cool to get both symbiotes in one set, plus a cool new Spidey, a way-obscure choice in Demogoblin and J. Jonah, hands down my personal favorite of this set.

The designs painted on each blank are great– J. Jonah’s scowl captures his curmudgeonly demeanor perfectly, while Carnage and Demogoblin both sport character-appropriate evil toothy grins (I love that Demogoblin’s tongue wraps in his hood around the back of his head). Venom wins, though, with both his fang-filled mouth and huge tongue, plus a second Eddie Brock head on the back side which can be flipped around!

I think this new scale for the mini Muggs works out even better than the original 5″ guys, and I really hope Hasbro keeps the line going… I’d love the chance to build out more of the Marvel Universe in this cool, hyper-stylized format! We’d like to give a huge shout out to Hasbro for giving us the chance to review this set… if you’re a fan of Spider-Man OR Mighty Muggs, you should totally give this set a shot– while the Maximum Carnage set was a NYCC exclusive, Hasbro has extras for sale now on Hasbrotoyshop.com– Click here to get yours today!