May Stunk For Masters Of The Universe 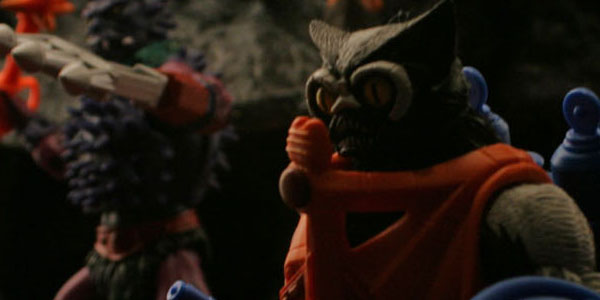 May has come and gone, and among Mattycollector’s offering’s that month, the least anticipated one came off the one best-executed. Evil warrior Stinkor was pushed back to May to accompany New Adventures’ goon squad member Slush Head, Scott Neitlich’s original 30th Anniversary creation The Mighty Spector, and the Snake Mountain display stands. Each displayed both flashes of brilliance and bewildering design choices, but in this robust month of figures, it’s nice to see a bit of variety thrown our way. 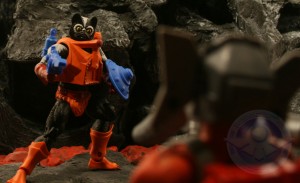 To their credit, the Four Horsemen thought of everything. For Stinkor, he did not merely have an Evil Warrior’s body, Mekaneck’s armor, and Mer-Man’s head… They went all out and gave us a new gun (in some media, he had a blue Zodac gun), alternate head, unique forearms, face mask, alternate armor nozzle, signature shield, and backpack. Not to be outdone, Slush Head come with his dual-purpose axe/gun, armor, head with water dome and plug, backpack, and two metal grabber claws. Rounding out the three, Spector doesn’t take much out of the tooling budget, with a new left forearm, plasma blade, head, blaster, and harness. As far as the Snake Mountain stands are concerned, if you know what you got with the Grayskull stands, the same apply: a stand with 2 removable pegs and a stalagmite piece.

Unfortunately, $20 for a figure doesn’t stretch as well as it used to and cuts were made across the board. Stinkor’s weapons have no metallic detailing, or any paint for that matter.  Also, the forearms were inexplicably swapped on Stinkor by design. Much has been said about the decision, but I am very much of the camp that design decisions need to be left to the sculptors. If it was a deliberate move, I can’t understand it. If it was in fact accidental, this QC and PR nightmare needs to stop. This definitely will impact sub sales. Characters in a line like this don’t get second chances, and it’s heartbreaking to see this with Stinkor. At least his weapons have a shot at salvation in a future weapons pack like Adora’s sword.

Spector wasn’t immune to cutbacks, even with what little new pieces he acquired, since he lost his plasma whip. Outside of questionable design aesthetics, he was well assembled, stands, and poses quite well.

While Slush Head saw no real cutbacks, Mattel did hamper his neck articulation in favor of an action feature. After Sorceress, one would think Mattel would be a little cautious about such things. Long-term paint exposure to liquid filled in the dome will be interesting to see, but I would love to be wrong about it ruining the toy. 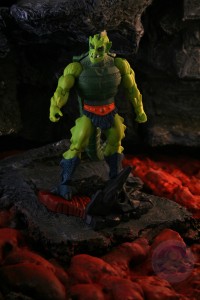 Lastly, the greatest aspect of piecing the Snake Mountain stands together is to make a diorama of sorts. Sadly, it was ruined by its design. First, many expected the purple stone of Snake Mountain, not black. The lava moving through the cracks are now gone, but what remains is a random pool of badly-painted lava that has a peg hole to place an Evil Warrior’s foot on the lava (?) and the design choice completely breaks up the seamlessness of placing the stands together. Unless they are assembled and run as strips, this execution was a poor one. Again, no waist clips ruins a good idea.

A badly-assembled Stinkor, an incomplete Mighty Spector, an immovable neck on Slush Head, and ill-conceived Snake Mountain stands really put a damper on the month’s offerings. I really do love this line, but copouts and shortcuts (as understandable as some are) are not why I signed up for subscriptions. As someone who currently owns four subs, I will assuredly drop to 1 or none for next year. Price markups like the one to be seen for 2013 don’t affect me personally, as long as the toy is made as intended, and QC should be included in the price. They need to wow the crowd this July at San Diego, because this sour taste is what I am bringing to the Convention Center. As an aside, It had to be noted that their stance on NOT having action features on their toys have been very wishy-washy. On the one hand, it makes management look hypocritical, but on the other hand it gives me hope that hard line approaches to the toys aesthetics can soften or change. Again, let’s see what San Diego has in store for us.