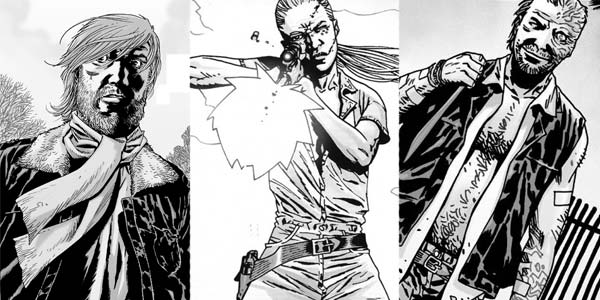 UPDATE Jan 11th:  Photos of the 3D renders for this series have hit the web!  Get the full lowdown on the latest Walking Dead comic figures, AND see what they will look like, below!

I’ll admit, I was getting nervous.  Between retailers like Amazon and Toys R Us clearancing the second wave of comic-style Walking Dead figures, and the Skybound exclusive Negan, I figured we had seen the end of the comic-based toy line, save for a few exclusives here and there.

But McFarlane Toys has settled my fears by announcing an all-new lineup of four new comic figures coming this June!  While we don’t get any photos yet, the figure descriptions suggest they’ll be a great new assortment, especially if they continue the recent articulation and detailing trend of the last few waves of Walking Dead toys.

I’m definitely most stoked for Andrea, but Dwight should be a good fit for Negan, it will be nice to have an improved Rick, and the punk zombie just sounds like fun.  I imagine we will see these guys on display at Toy Fair next month, and I can’t wait.  Below is the breakdown of each figure, from McFarlane Toys:

RICK GRIMES
Our latest Rick Grimes action figure features the main character of The Walking Dead as he appeared following the fall of the prison. After losing his new home, his right hand, his wife, and even his newborn daughter to the Governor, a tougher, harsher Rick emerged from the rubble. Far from his beginnings as a clean-cut sheriff, this new version of Rick shows the scars of survival and loss that have shaped him throughout his struggle to survive. Figure features a bandaged stump on his right arm; long, unkempt hair and beard; and a ragged t-shirt with jeans. This battle-hardened version of Rick also comes heavily armed – ready to stop any threat, whether living or undead. Figure includes hatchet, revolver, shotgun, and rifle.

ANDREA
One of the original members of the Atlanta camp, Andrea has grown to become a capable defender of Rick Grimes and his band of survivors. Although she had never fired a gun before, Andrea discovered she had a natural skill with firearms, quickly becoming an expert sharpshooter and defending the group through the scope of a rifle. Like Rick, she has suffered pain and loss, and been left scarred – both with the physical scars of an attack from a knife-wielding serial killer, and the emotional scars of losing her sister and her beloved Dale. Our figure of Andrea features this skilled marksman in her prison aftermath attire of a tank top, torn jeans, and gloves. Figure includes her signature scoped rifle, plus a pistol and a knife for closer-range threats.

PUNK ZOMBIE
Our Punk Rock Zombie blends the horror of zombies with the rebellious aesthetics of punk rock to create a visually unique and unforgettable figure. Inspired by page 17 of The Walking Dead #30, you’ll need something bigger than a safety pin to fend off this foe! As the prison survivors brace for an attack from the Governor, Dale spots Tyreese returning from a dangerous mission. With only his suit of riot gear to protect him, Tyreese charges through a field full of walkers – including one with a tall, punk mohawk. Our interpretation of this distinctive undead shambler fills out what isn’t shown in the comic, adding classic punk details like a spiked collar and cuffs, studded belt with anarchy buckle, ripped jeans, and combat boots. Figure also comes with guitar accessory – so your survivors can wield an “axe” against the rest of your zombie hordes.

DWIGHT
A relatively new addition to The Walking Dead, Dwight was introduced in the memorable “Something to Fear” storyline surrounding the series’ shocking 100th issue. A top lieutenant of Negan and his so-called “Saviors,” Dwight led an attack on Rick’s group in the Alexandria safe zone. Using his signature crossbow, Dwight suddenly and unexpectedly killed a major character, dealing a crushing blow to the sheltered community. Life under Negan’s rule has not been kind to Dwight. When his wife disobeyed Negan’s draconian rules, he punished them both by branding and scarring Dwight’s face with a hot iron. Such treatment has pushed Dwight to rebellion. Now a double-agent, Dwight is working with Rick and the combined forces of Alexandria, the Hilltop, and the Kingdom to overthrow the ruthless dictator. Our figure of Dwight features the scarred Savior in his sleeveless shirt and vest, complete with bandages and burned face. Figure includes Dwight’s crossbow and a hook to attach it to his belt.

Pick up these The Walking Dead survivors and one rocking zombie this June.

Stay tuned to www.mcfarlane.com for the latest news and info on all the upcoming products from McFarlane Toys. 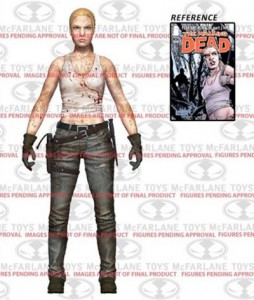 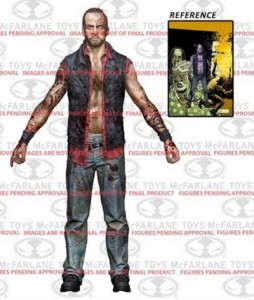 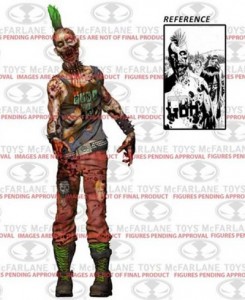 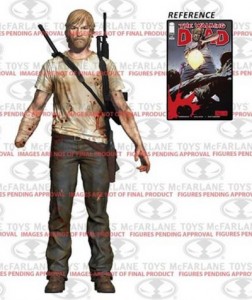