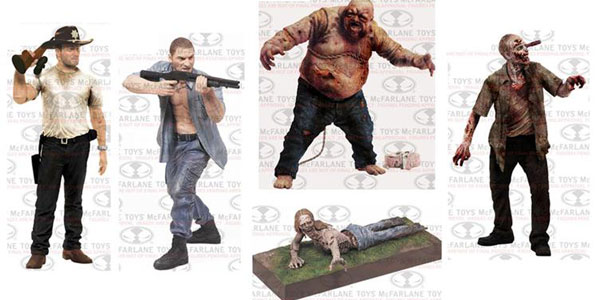 Big Bad Toy Store has updated their preorder page for The Walking Dead TV Series Two, which now includes our first look at the latest batch of figures coming this Fall from McFarlane Toys. We have know since Toy Fair that this second round of toys based on AMC’s TV series would feature a second take on Rick, plus his buddy turned (SPOILER) murder victim Shane, and three new zombies, and now we’ve got our first glimpse at the final product. Much like the show’s second season as a whole, the results are kind of a mixed bag.

I certainly had my issues with the second season of The Walking Dead. While I defended the early episode’s slow pacing, it paid off big time in the mid-season finale late last year and when new episodes picked up in February, I felt the show really found its footing… before hitting some huge stumbling blocks, and resulting in a EPIC face-plant of a finale. It was bad enough to make me turn off my Walking Dead radar for a while, but the toys kind of rekindled in me that same conflicted senitment toward this long-struggling series. 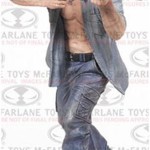 We get two new survivor figures in the next round, a new “civilian” take on Rick Grimes, as well as Shane Walsh, captured in plastic for the first time. I like the Rick figure pretty OK. The hat is a nice change of pace from the first series look, and the t-shirt is an alright choice… overall the new Rick captures his Season Two look for about three to four episodes, so I’m pretty good with that.

When it comes to Shane, however, I’m really hoping the “Not Final” watermark on BBTS’ photos applies here. While McFarlane typically excels at great actor-based portraits (second only to NECA in this scale, in my opinion), Shane doesn’t seem to bear a strong resemblance to actor Jon Bernthal. On top of that, Shane is dressed in his “tactical gear,” consisting of a bare chest and an open blue shirt. The group’s bad boy wore this outfit for exactly one half of an episode during his time on the show, traditionally opting for a more truly tactical black t-shirt and SWAT-style pants with boots. It seems like a weird choice to give Shane such an episode-specific look, which harkens back to McFarlane’s previous scene-specific, non-iconic character renditions in the LOST series (and we all know how that one turned out). 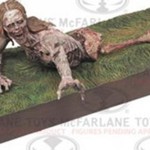 The Walkers fare much better, from the look of things. I’m glad we will see the bicycle girl, as she is one of the most iconic zombies of the entire series (comic and TV). The blocky display base appears kind of clunky (like she’s laying on a grass-covered mattress), but it is quite possible this is housing the figure’s “eerie reaching motion” action feature or something so I will wait to pass final judgment.

The series is rounded out by two solid choices for Season Two character Walkers: the RV zombie that attack Andrea in the premiere episode, and the bloated Well zombie, whom the group tries to lure out of Hershel’s well with some epically nasty results. Both were pretty cool show moments, and the well zombie in particular is right up McFarlane’s alley, giving them the opportunity to flex their muscles and create another bloated, awful and just plain disgusting creature like they do so well.

I’m interested to see how the final versions measure up to these prototypes. Sadly we’re probably too late in the process to correct things like Shane’s bad costume choice, but with some minor likeness tweaks and a better look at the various cool action features these toys promise, it’s looking like McFarlane’s second outing with The Walking Dead will be a worthy successor.