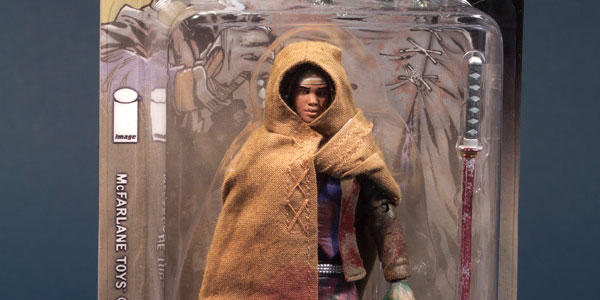 The Walking Dead’s Michonne gets blood on her brand new accessory at this year’s Comic Con.

McFarlane Toys revealed their first SDCC exclusive (they’re also doing a Halo 4 preview piece but that won’t be unveiled until June 28th). In conjunction with Robert Kirkman’s Skybound, fans at the show can pick up a new version of The Walking Dead’s Michonne with a new, bloody paint deco and an all-new cloak based on her first comic book appearance.

If you followed my Walking Dead Season Two coverage, it shouldn’t be news that I’m not the biggest Michonne fan– I think she’s way more a fan-wank, idealized “badass grrl” than a real, human character, but her first comic book appearance was admittedly pretty iconic, and this new variant pays tribute to it nicely, between the cool new cloak and the striking box art by series artist Charlie Adlard. 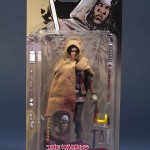 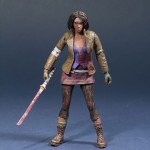 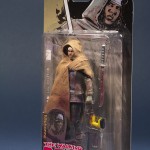 Robert Kirkman is the creator/writer of Eisner Award-winning Skybound/Image comic series and best-selling graphic novels, The Walking Dead. Michonne is such a beloved, badass character from the comics, the release of the Skybound Exclusive Bloody Michonne action figure by McFarlane Toys has been hotly anticipated. To celebrate the release of the 100th issue of The Walking Dead on July 11, Skybound will give the people at San Diego Comic-Con exactly what they want.

Kirkman says, “Comic-Con is the place for getting rare exclusive swag and Michonne’s never been more popular, so we thought this would be the perfect time to team with McFarlane Toys to produce this exclusive Michonne figure.”

Available exclusively from Skybound Entertainment, McFarlane Toys’ limited edition Bloody Michonne action figure is slated for release at San Diego Comic-Con. The figures will sell for $25 at the Skybound booth. This bloody version of Michonne is featured with the blood-spattered poncho she wore upon her first encounter with Rick and the survivors and is fully accessorized for all of her unforgettable acts of vengeance to come. The six-inch scale figure comes with bloody versions of her signature katana sword and various implements of revenge including a power drill, hammer, pliers, and spoon. Features approximately 22 points of articulation. Packaging features new art The Walking Dead artist Charlie Adlard.

Robert Kirkman’s success and passionate advocacy for creator-owned comics led him to become the first person invited to become a partner at Image Comics since the company’s inception twenty years ago and he formed his own imprint there, Skybound, in 2010. Kirkman is the creator/writer of the Eisner Award-winning The Walking Dead, long-running Invincible, all-ages Super Dinosaur, The Astounding Wolf-Man, and new title Thief of Thieves, among many others. Kirkman has earned the respect of the comic, writing and television communities and topped the New York Times bestseller list for graphic novels in 2011 and in April 2012, he took the top five spots on both the hardcover and paperback lists. He’s the creator/executive producer and writer of the hit television show, AMC’s The Walking Dead, the highest-rated basic cable drama of all time in the U.S, also an international success in 120 countries and 250 million households. AMC is developing Thief of Thieves as a potential series with Kirkman serving as creator/executive producer and writer.  www.Skybound.com is your destination for all news and merchandise for Robert Kirkman, The Walking Dead and all Skybound titles.

McFarlane Toys is the fifth largest action figure manufacturer in the United States.  Established in 1994 to manufacture and sell action figures based on founder Todd McFarlane’s comic book character Spawn, the international award-winning company has expanded into licensed products to become one of the premiere action figure producers on the planet. Check out the McFarlane Toys’ Catalog, where you can see all of our current figures, previews of upcoming toys, and even a massive archive of every action figure we’ve ever made.