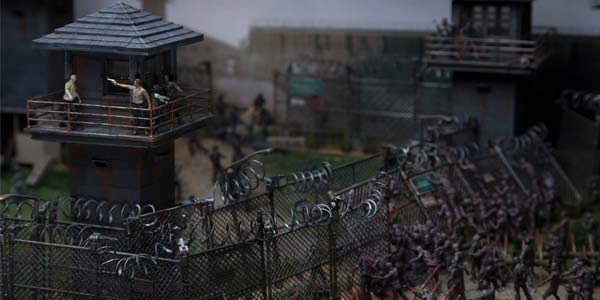 When McFarlane Toys launched the Walking Dead building sets last Fall, they were exclusive to Toys R Us.  But now, the successful sets are being expanded to other retailers, including Wal-Mart, Target, Walgreens, Amazon and GameStop.  They’re pretty awesome toys, so I’m glad to see they generated enough retailer interest to go for wide distribution.

What’s going where?  McFarlane released a handy guide to what items will be carried at each chain (see it below)… for now it’s all the same sets that TRU has been selling since October… with one keen exception.

Wal-Mart is not carrying the deluxe set, the Prison Tower with Fence… Instead, they will carry the Tower and Fence as two unique, smaller sets.  This is kind of cool, because it gives us another option to build up and customize our prison display, without having to shell out $70 a set.  Smart thinking on that exclusive, McFarlane!

It’s to be assumed the future Walking Dead building sets will also be carried at all of these retailers, which should make them much easier to find than the first TRU editions, which have been selling through at a pretty consistent clip, at least in my area.

When we first launched our THE WALKING DEAD building sets last fall exclusively at Toys ”R” Us…. they couldn’t keep them on the shelves during the Christmas holidays! But a lot of you said that you didn’t live near a TOYS R US and couldn’t go and pick one up. Well,I think you’ll be happy with this news. WAL-MART, TARGET, Walgreens, Amazon and GameStop will begin carrying the first line of THE WALKING DEAD building sets products now (or very, very soon).

And in the case of Walmart they are going to sell the Prison Gate & Fence SEPERATELY from the Prison Tower itself (both were packed together at Toys R Us). So that means that you can CUSTOMIZE your scenes even more or re-create some of the scenes I’ve shown you in photos here on Facebook and elsewhere.

We also have some COOL new sets coming out as part of Series 2 later in 2015 – even more goodies than we’ve already (secretly) shown you! We’ll be revealing some of the new items to you next month.

Below is a chart that shows which stores are getting which items. So now you have a greater opportunity to be near a store that will be carrying our building sets for the rest of the year. This should hold you over until The Walking Dead starts back up again in a couple weeks! 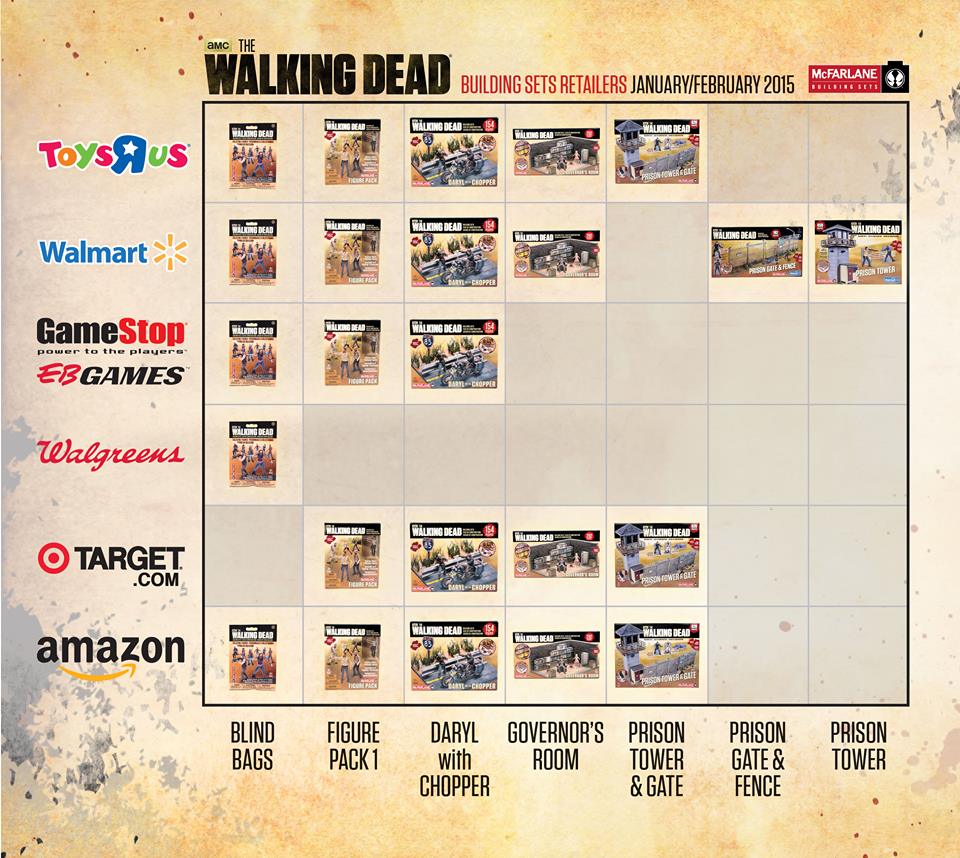