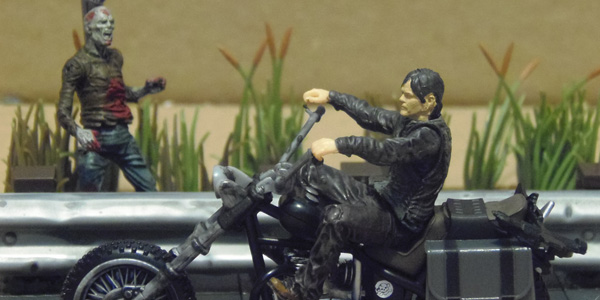 Just when you thought you have seen it all, McFarlane Toys reaches into their big bag of ideas and delivers The Walking Dead building sets. There are three sets in all– Daryl with Chopper, The Governor’s Room, Prison Tower & Gate, and a pack of individual figures. Of the three sets I was able to grab a 154 piece Daryl with Chopper set from a local Toys R Us. The difficult part was being able to find the sets in the stores themselves. After looking through the aisles of building sets they were in an obscure spot next to some Kinex sets. Make sure when looking for these you check every building block aisle and even the end cap shelves… or the collector’s toy section, where some stores are displaying these.

Imagine the excitement putting this set together. The combo of model kits-meets-building blocks made for two hours of building fun, since some smaller pieces made building the set a challenge. The set includes Daryl and one zombie– Daryl is in the riding position, with moveable arms, and his signature crossbow.  The zombie comes with a small stand to keep him in place, and his arms and legs are moveable. The attention to detail including the wings on Daryl’s jacket give this a straight off the television feel. The chopper was a bit difficult to piece together because the pipes are small and very delicate to attach to the cycle itself. Even attaching the grass proved to be a challenge… a suggestion to fellow collectors– because of the added realism the pieces do not attach the way most blocks would, so take your time and figure out what works best especially the grass. I found that adding the grass before you attach the block to the base made it easier.

The Landscape is customizable for those with great imaginations. Road sign, cracks in the street, even the dented worn out guard rail all put the finishing touches on the diorama. Price is not an issue at $19.99 for this set. It’s also small enough to display anywhere in the house. My only complaint, when can we get these playsets in scale to the action figures? 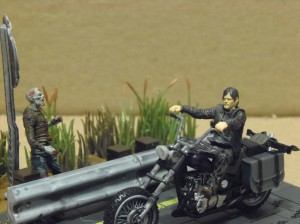 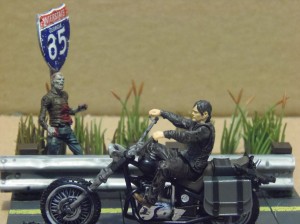 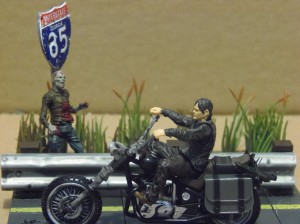 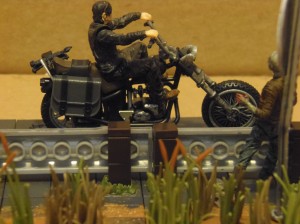 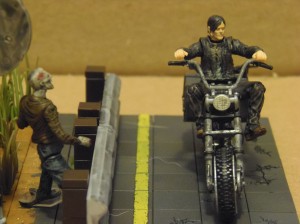 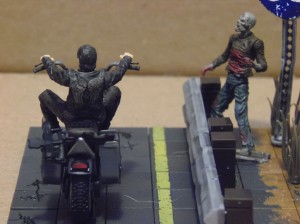 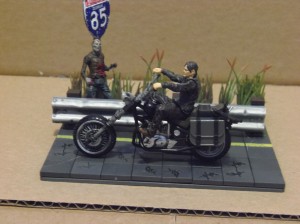 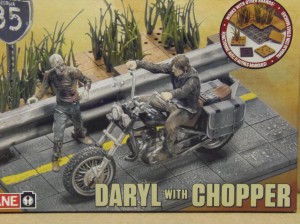 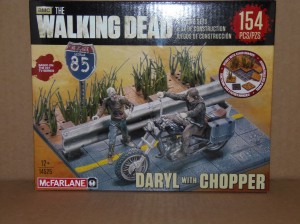 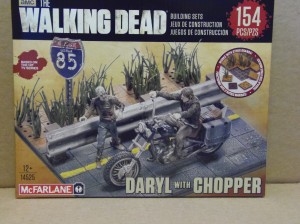