Meet The New Carrie In This Teaser Trailer 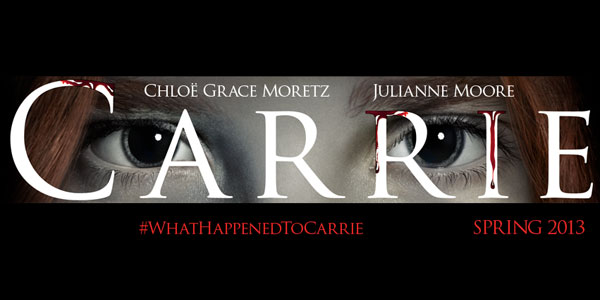 The new take on Carrie revealed its first trailer at New York Comic Con, and now it’s hit the web in full force.

I’m still not a hundred percent sold on the new Carrie movie, especially believing as I do the Brian DePalma/ Sissy Spacek/ Piper Laurie version told the story so perfectly.  But when I discussed the new movie with Julianne Moore, Chloe Grace Moretz and Kimberly Peirce at New York Comic Con (which will be recapped shortly, I promise), the new take they described– and the excitement they shared for it– have me hopeful.  I love both lead actresses, and I think Moore is a brilliant choice for Margaret, and Kimberly Peirce’s previous movies have all been home runs.  So I’m rooting for this movie to be good at this point. I really hope it is.

The new trailer is pretty CGI-ish, with its seeping aerial camera, but I like the build as we eventually zoom in on the blood-soaked Carrie, and double extra brownie points for soundtracking it with the actual hymn Stephen King mentioned in the book… a detail that never made its way into De Palma’s film.

Check back shortly for my take on the Carrie roundtables at New York Comic Con… It’s possible that watching this trailer after talking to the cast and creators about the new film has given me a new perspective on it, but what do you think about what we’ve seen so far?